How to verify the runway numbers in a systematic way given the high workload during landing?

I have never had a runway number verification on my checklists because normally the landing checklist is completed and stowed by the time I am on short final and can clearly see the numbers.

However, after seeing that Harrison Ford just landed on a taxiway and I know commercial jets have done the same thing from time to time, I am considering a checklist item. One issue is not just the taxiways, a lot of larger airports and big airfields like Oshkosh have multiple parallel runways with right/left designations so it can get pretty confusing. The whole problem is that normally when I am on final and swooping in everything is happening fast and I do not have available bandwidth to be looking at a checklist, I have to be laser focused on making the landing and watching for traffic.

Any suggestions how to verify the runway in a systematic way given the constraints?

There are a few common (?) techniques you could use, although how you work them into your actual checklists is up to you. Here are some that I've been taught, there are probably more:

Tune the localizer and/or load an approach

Pros: reliable and accurate (if you set the avionics up right) because it gives you guidance for a specific runway
Cons: can lead to fixation on instruments when you should be looking outside; not every runway has an approach; your aircraft may not have the necessary avionics; may be awkward or distracting to set up and verify

Pros: many pilots do this for takeoff, so it's a familiar check; works for any runway; convenient if you go around and are told to "fly runway heading"
Cons: doesn't uniquely identify a parallel runway

Write the runway number on your kneeboard

Pros: simple; easy to glance down at quickly
Cons: none that I can think of, unless you don't have a kneeboard

Or use all three techniques together, of course.

ATC could still change your landing clearance, or something else could force a change of plan, but stuff happens and you just have to deal with it. Personally I like the localizer/approach method at night and/or at an unfamiliar airport, otherwise I'll just write down the runway number on my kneeboard.

Cancellation: 12/09/2018 1200 (UTC) Events in which an aircraft lands or departs on the wrong runway, a taxiway or lands at the wrong airport tend to be among the highest-profile and most dangerous events in aviation. These events have been occurring at an average rate of about 24 per year, increasing to over 60 in 2016.

• Seattle-Tacoma International (SEA), where a B737 landed on a parallel taxiway between two parallel runways.

• Boise Air Terminal/Gowen Field (BOI), where an A319 correctly read back the runway landing clearance but landed on the parallel runway.

• McCarran International (LAS), where an A320 was cleared to land runway 19R but landed on runway 19L.

The common denominator for most wrong surface landings/departures was the lack of situational awareness, with closely-spaced parallel runways, off set parallel runways, or taxiways which run parallel with runway. Wintertime flying conditions, including:

• Sun lower on the horizon.

• Snow/water/ice on airport surfaces combined with lower visibility due to storms/fog.

• Not comprehending/following the control instructions of Air Traffic Control (ATC).

What can pilots do:

• Familiarize yourself with the airport to the maximum extent possible by reviewing pictures, maps and diagrams of the airport design.

• Be familiar with the primary arrival runway.

• Be cognizant of adjacent or nearby airports, particularly ones with similar runways.

• Make sure all ATC instructions and clearances are clearly heard and understood. Make sure you give a proper read-back, if unsure, ask ATC to repeat the instructions or clearance again and don’t hesitate to ask questions about anything you feel requires clarification.

• Confirm that you have correctly identified the destination airport before reporting the airport/runway in sight, especially at night or when weather or environmental conditions might make precise identification more difficult.

Finally: Below are some depictions of what you may encounter during your flight. Remember to LOOK, LISTEN, and FOCUS -- the actions YOU take not only affect your safety, but also the safety of OTHERS. 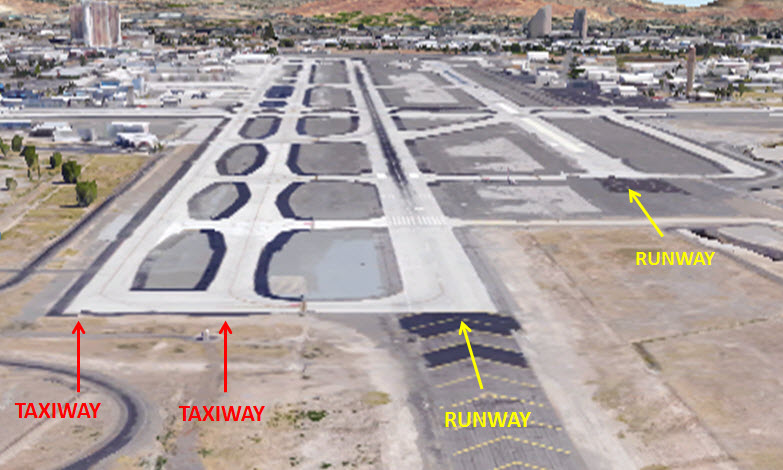 I don’t use checklists when taking off and landing, but I do use acronyms.

On takeoff, I use HAAPPY

On landing I use several versions of B-RAAGS

I have target MP or RPM for each leg that I don’t repeat each time, I just set them and adjust as necessary for wind. Same thing for flaps, I put the first notch down at the numbers or final approach fix and the the rest near the threshold.

Not the answer you're looking for? Browse other questions tagged landing runways checklist or ask your own question.

13
What is the correct phraseology for changing the runway of a landing clearance?

25
How do airports determine when they should change their runway numbers?
6
Why is the minimum runway length non-linear in relation to the landing weight?
9
How is the runway pavement chosen?
2
Is white/brown-out effect hazardous during the landing roll out?
29
How much of the landing runway is mine?
13
How are landing aircraft handled during an emergency runway closure?
5
Why is the font size of runway numbers in Canada small?
10
How do pilots of big jets determine if they are clear of the runway after landing?
0
How to estimate the altitude of an aircraft at a given distance from a runway?