Can you land IFR at sea?

I've heard that some seaplane bases have IFR approaches, but what about landing at sea?

If you flew out into international airspace, could you land at sea and then taxi back into US waters without being subject to US regulations? You wouldn't have to know where the "runway" is because it's everywhere.

(FYI, I'm a SEL pilot, so I'm not considering actually trying this!)

Well there is at least one case where this is true and it's used by the military - A Case 3 instrument approach to an aircraft carrier.

The approach is essentially equivalent to a terrestrial military TACAN approach coupled with a precision microwave landing system on final approach. See the basic plate below. Both IMC and night VFR conditions require a Case 3 approach per NATOPS.

As to civilian seaplane bases, the answer is actually, yes, some do. One example is the GPS RNAV approach into Greenville Seaport (52B) in Greenville, Maine. 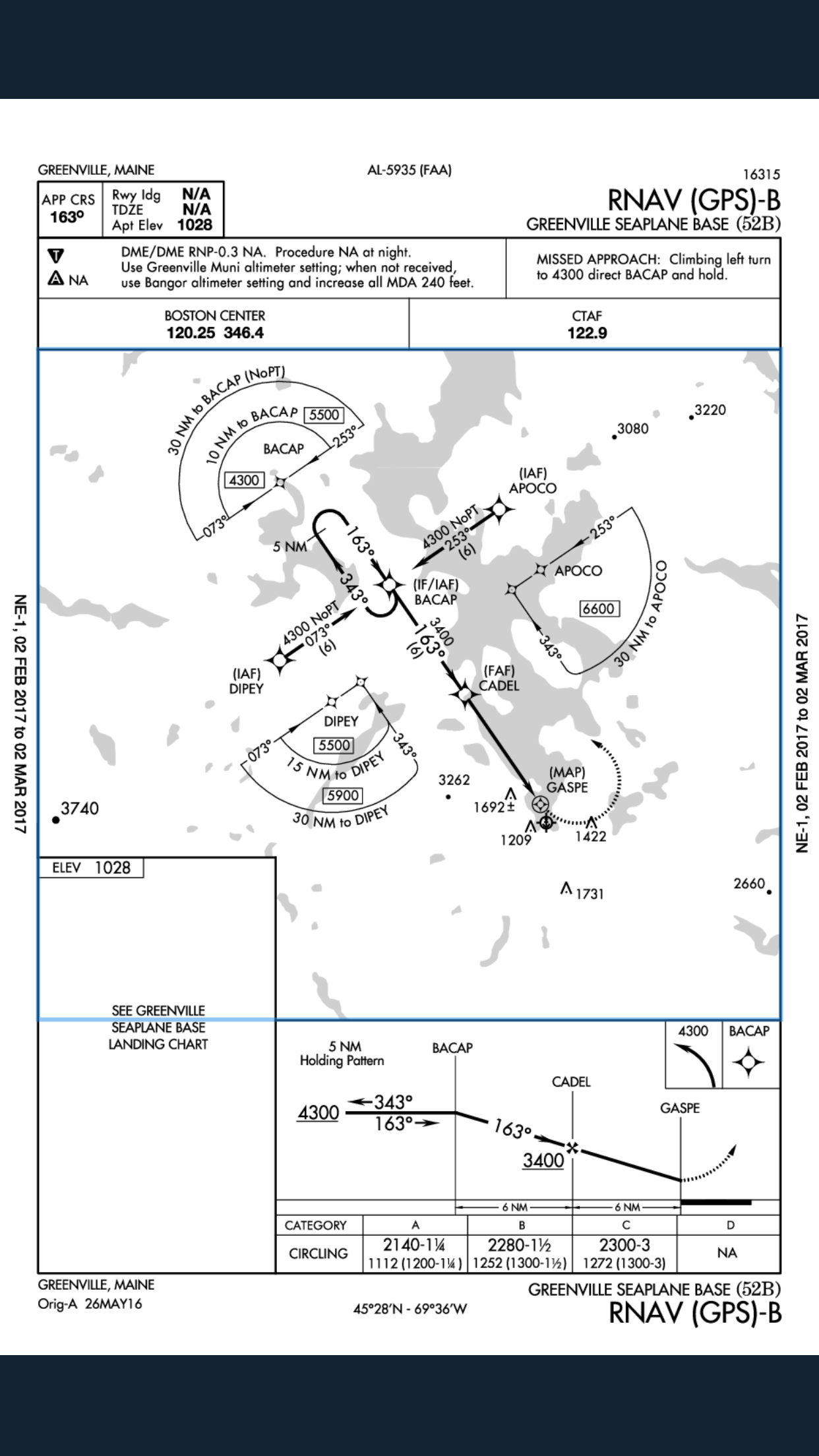 As for an instrument approach to land a seaplane at a arbitrary point in the middle of the ocean, no, I am not aware of anything like that. Maybe one day an advanced version of GPS or some similar satellite based navigation system coupled with an advanced INS could allow a pilot to arbitrarily pick a point then create a custom approach which provided lateral and vertical guidance to the landing site. Even if you could do this, you still face unknown hazards like surface winds and waves (seaplanes were never made to brave rough open ocean swells). It would be virtually impossible to safely land on a moonless night.

OK. There are some answers with some good information here but here is my stab at it. I'm not going to go into whether this is smart or not, just possible. And yes you can land a seaplane safely in zero-zero conditions, if the conditions are right (haha). Anyone that tells you different isn't using their imagination and/or isn't a seaplane pilot. Once again, not saying it's smart, just possible.

1) "I've heard that some seaplane bases have IFR approaches, but what about landing at sea?"

If you have an ILS, you need to mount the antenna somewhere and "at sea" is not very conducive to that. This leaves GPS (RNAV) approaches that could be theoretically built "at sea". However, until RNP and LPV (or however they are renaming these concepts this week) becomes common place in small aircraft you can only get down to minimums of about 500' anyways. If you are dropped off that "high" , you are pretty much legal "at sea" to be down there buzzing around VFR anyways even in US airspace (assuming you can see, which if you couldn't then landing from an IFR approach wouldn't be prudent anyways, even on a runway). So it kind of defeats the point of doing an approach in the first place.

2) "If you flew out into international airspace, could you land at sea and then taxi back into US waters without being subject to US regulations?"

Short answer, technically yes, but….. You could land outside of ADIZ, which is typically 12 miles out and be subject to no FARs, I guess, technically. However there is almost always a controlling agency for that airspace even if the country possibly care 'as much' once outside their sovereign airspace. They will start caring a lot if and when you conflict with their traffic. Back to the point, there are many practical problems with landing this far out though and it certainly isn't worth the hassle just to avoid some regulations (that don't really limit you). First problem, there are very few seaplanes still flying today that can land 12 miles out to sea on anything but the absolute best (read that as calmest) day. And, oh yes I forgot to mention, in the US at least they aren't going to wait until you get right up to twelve miles with no transponder code to intercept you (I'm assuming you aren't talking to anyone because you don't want to be subject to US regs). So you actually need to land about 35 miles out (don't ask me where that number is from, I honestly don't remember, but 35 miles was the magic number and deadline for having a transponder code to cross the ADIZ). Moving on, If you do find that rare day when the water is just beautifully calm and do land, you run into problem number 2. Second problem, now you have to taxi 35 miles to shore. Talk to any seaplane pilot you can find, and they will be happy to tell you how painful this would be. Even if it were just twelve miles this would be a great reason to just talk to someone and go the flying route. This leads us to problem 3, which is even if you aren't subject to aviation regulations you are now a boat. So you must clear immigration and customs as a boat. The coast guard whom you may run into will not be a problem. In my experience they are generally great people and very practical because they have important jobs to do. They'll call a hammer a hammer, and will be happy to treat you like a boat. Your problem will be with customs and border patrol. They will be so confused by this beast you have brought them, that they MAY not want to clear you just for fear of getting reprimanded. Be ready for lengthy explanations and calls to supervisors leading to most likely hours of waiting. Not saying CBP doesn't do an excellent job, but you just brought some poor junior officer a seaplane which is the equivalent to taking a puffer fish to a butcher in Alabama and telling him, "Don't worry, I'm pretty sure my wife won't sue you if you kill me by cutting that thing wrong." From personal experience, if you try to set something like this up in advance with CBP you have about a five percent chance of it actually slightly helping somewhat, but not really. Problem is when you call to set something up you are talking with supervisors and they are definitely not the ones who are going to meet you, and they probably can't tell you who will meet you.….

All that being said, I don't see any reason to avoid US airspace. Im not sure what regs you think you'd be avoiding but there aren't really that many to worry about in this situation (I realize this is probably why you asked in the first place). There are no regulations against landing in salt water anywhere in the US. The coast guard owns the salt water essentially and they are great to work with. Also controllers aren't going to care if you land without an airport anywhere, no regs against it (think helicopters, grass strips, good bush flying). That being said, there is a big difference between being legal and not pissing people off. Land in the intercoastal in a lot of places and you'll probably piss someone off. Land elsewhere in the intercoastal and not so much. Pissing people off can be much worse at times than legal issues.

For the record I'm just an old seaplane bum with a number of years dealing with regulatory agencies, so take my answer for what it's worth (probably not much).

it is not possible to land to sea in IFR condition. You need to see and you have to land your plane parallel to waves.

Not the answer you're looking for? Browse other questions tagged instrument-flight-rules seaplane or ask your own question.

21
Can you bust a TFR while operating under IFR?
19
Lost radio communication after take-off in IMC - what are my options?
23
Has anyone considered putting a hydrofoil on a sea plane?
3
Can any land-based plane be made to land on water?
5
Can you file an open-ended IFR flight plan?
4
Can a seaplane make a long distance sea voyage on the sea?
1
If you make up your own IFR waypoints, how does ATC know where they are?