How is a sideslip maintained (aerodynamically)? 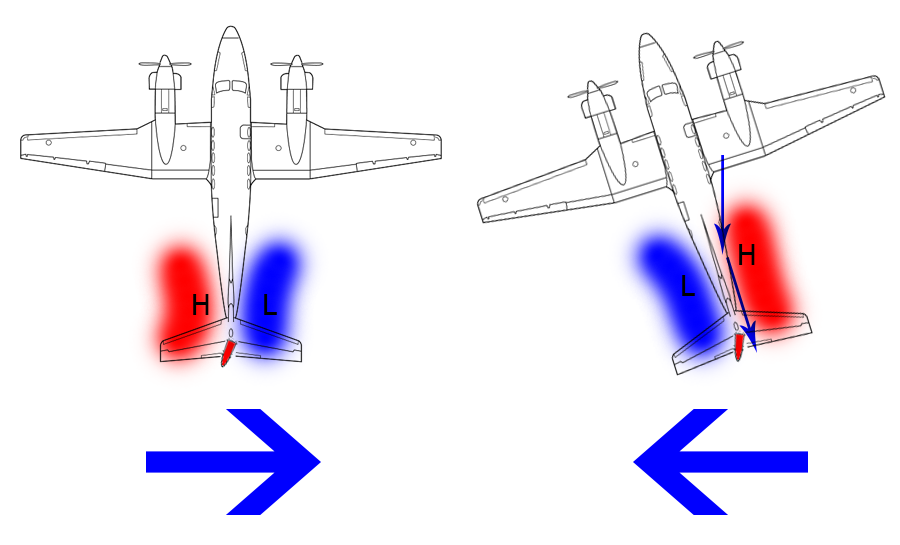 The initial rudder deflection to the left creates a side force that points right and yaws the plane to the left.

NASA puts it this way:

For the vertical stabilizer and rudder, the orientation of the airfoil causes a side force to be generated. With greater deflection of the rudder to the left, the side force increases to the right.

I'm looking for an answer regarding only the yaw, ignoring the roll/pitch side effects.

Here's a representative image of the variation in lift coefficient with respect to angle of attack. The same airfoil is considered in a "clean" configuration, with a deflected flap, and then with both flap and slat (you can ignore the last, which is the uppermost example). You can see that, with deflected flap (or, shall we say, rudder) the lift slope shifts upwards, changing the lifting generated at a given angle of attack since the rudder deflection has, effectively, changed the airfoil's camber.

Hence, while the airfoil's angle of attack has changed, the lift generated at that angle of attack has also changed. Cambered airfoils can generate lift at negative angles of attack and so, for a given rudder input, the aircraft will assume a steady sideslip angle where the induced yawing moment is in equilibrium with any restoring moments generated by the rest of the airframe. From my time flying gliders, this could be illustrated by the fact that, no matter how much rudder I put in, I could only make the aircraft yaw so far--there just simply wasn't enough aerodynamic control authority to overcome the force you mention as well as unbalanced yawing moments generated by the fuselage and wings. But, at the same time, I could intuitively change my sideslip angle by proportionally varying the amount of rudder I put in or, to be consistent, I could modify the aircraft's equilibrium position in yaw by incrementally "changing the camber" of the vertical tail.

"NASA puts it this way" Well, that's one way of saying it.

A side slip is created by rolling the ailerons, and true to its name, the plane "slips" sideways in that direction. The effect of this slip is sideforce on the plane FROM the direction the plane is slipping, acting on ALL side surfaces (nose, landing gear, tail, wings, etc.). A directionally stable aircraft (in yaw) will have more side area behind the CG to "weathervane" the aircraft.

So the aircraft tail now has more "High" pressure on the side into the slip and, without rudder "away", will try to yaw in the direction of the slip.

The rudder away actually re-balances the side force torques so the plane does NOT yaw. If a cross wind is present, the plane will continue on its track (to stay on track with a runway to land). If not, the plane will drift sideways in the direction of the slip but won't yaw. You can use this on a calm day if you are a little off center on final (provided an adequate safety margin above stall).

Important not to confuse side slip with forward slip. In a forward slip the rudder is deflected to push the fuse into the air stream to purposely create more drag, in order to steepen the glide angle.

These things don't take an engineering degree to understand or explain: Push the rudder pedal with your foot and the tail moves in the opposite direction. If you hold this pressure a slip will be maintained. Constant rudder control pressure is required. As soon as you release the pressure aerodynamic forces will recenter the rudder and you will no longer be in a slip.

Once you have actually done it, it is a very simple concept. If anyone up in the Puget Sound area struggles with understanding these fundamental concepts and would like a demo I would be happy to take you flying.

Granted, the fin-fighting-rudder model outlined below is a little simplistic and if we look at the fin-rudder combination as a highly cambered airfoil flying at a mild negative angle- of-attack, perhaps we can see how it can still generate a net sideforce opposite to the direction of rudder deflection, even if the rudder is nearly aligned with (streamlined to) the direction of the undisturbed relative wind. (This appears to be one of the key points made by another answer.)

In that case the appropriate model would be not that the fin is "fighting" the yaw torque generated by the rudder, but rather that the fin/rudder combination is acting as a unit to "fight" the opposing sideforce and yaw torque generated by the rest of the aircraft, even though the (highly cambered) fin-rudder combination is actually flying at a slightly negative angle-of-attack in relation to its chord line. This idea is really just a tweaking, not a fundamental revision, of the other ideas expressed below.

For the rest of this answer we'll follow the more simplistic "fin fighting rudder" model:

If we are fighting an asymmetric effect like P-factor and we apply ONLY enough rudder to exactly center a yaw string, then we can see that since it is reacting to the rudder alone, and not the fin, the ball actually deflects slightly in the SAME direction as the rudder. That's why we leave the ball slightly deflected in the same direction as the rudder when we lose one engine in a twin--because it centers the yaw string. So we should apply a little less rudder than would be needed to fully center the ball. (Disclaimer-- nothing I say about twin/multiengine airplanes comes from personal experience.)

Imagine an exceptional case-- let's say we have a finless swept-wing flying wing aircraft, to which we add a rather short, very slender tail boom, and a large all-moving rudder with no vertical fin attached. Now we deflect the large rudder, which is located not so far behind the aircraft CG, 45 degrees to the left. Can we be so sure that the net sideforce will be to the left in this unusual case? The yaw string will certainly deflect to the left, but will the slip-skid ball really deflect to the right? Since yaw stability is not being provided by the sideforce from a rear fuselage and vertical tail, but rather from the differential drag and yaw torque generated by the swept wings in the sideways flow, it seems very likely that the rightwards sideforce from the rudder might dominate over all opposing sideforces, and the slip-skid ball might actually shift to the left. Meaning that if the wings are kept level, the flight path would actually curve to the right, not the left-- AWAY from the direction of the pilot's rudder input.

Now, think about what direction of bank would be needed to maintain a linear flight path when landing such an aircraft while holding a strong left rudder deflection to keep the landing gear aligned with the runway while landing with a strong right crosswind! The upwind wing would have to be raised, not lowered!

And also imagine what would happen if the pilot landed such an aircraft in a right crosswind using a wings-level, crabbed, non-slipping approach followed by a left rudder "kick out the crab" input just before touchdown. If the touchdown were delayed and the pilot kept holding/ adding more left rudder as needed to try to hold the nose on the runway heading, while applying roll inputs as needed to keep the wings level, the pilot would end up with the left rudder pedal all the way to the stop as the aircraft veered to the right off the runway heading, flying in a wings-level skidding circle in the clockwise direction, initially taking the plane beyond the UPWIND edge of the runway, and then continuing on through the rest of the circle-- rather weird!

Changing tack a little, there are aircraft where it is possible to maintain a pronounced sideslip with the pilot's feet completely off the rudder pedals. I've seen this in a Challenger ultralight, and in some sailplanes with small vertical fins. Here's this works: the glider or airplane is in right bank, with the yaw string streaming far toward the left, i.e. the slip-skid ball deflected far to the right. The sideways airflow hitting the fuselage generates a sideforce that prevents the flight path from curving toward the low wingtip. The sideways airflow also interacts with dihedral and other related effects to create a left roll torque tending to roll the plane towards wings-level, which the pilot is opposing with ample right aileron to maintain the bank angle. The deflected ailerons generate a strong "adverse yaw" torque, toward the left, which maintains the slip and keeps the yaw string deflected. In essence the ailerons are creating a strong "backwards rudder" effect in addition to their roll function. Typically the rudder has floated all the way over to the stop and remained there-- to the left in this case. Any attempt to actually turn right by increasing the right aileron deflection can simply end up increasing the slip angle (yaw string deflection angle) without changing the bank angle appreciably, possibly even forcing the flight path to curve toward the left. So, it's not always true that slip is maintained purely by the pilot's rudder inputs! Aircraft with flight characteristics like those described above are almost impossible to control with the ailerons and elevator alone-- constant rudder "coordination" inputs are essential, and simply taking one's feet off the rudder pedals and trying to control roll with the ailerons alone eventually tends to lead to the aircraft getting "stuck" in a sideslip due to adverse yaw.

2
How can an all flying rudder be almost 100% more efficient than a vertical stabilator and rudder?
0
At what angle-of-attack (sideslip angle) would a symmetrical vertical fin stop "helping" a deflected rudder produce sideforce?

31
Principle of aerodynamic lift: are misconceptions also taught in flight schools?
2
Is there a specific relation between sideslip angle and yaw rate OR how sideslip angle depend on yaw rate?
6
Do aerodynamic forces and moments change aircraft pitch and yaw in the same way?
6
Why is the 737’s aileron/spoiler authority reduced at low flap settings?
7
Why does the A320 use the rudder for lateral control in mechanical law?
2
Sideslip vs Freestream Azimuth Angle
2
What are the disadvantages of a tailless ultralight design?
0
Forward slip dynamics