What was the first aircraft fitted with both an FDR & CVR?

What was the first production aircraft to be fitted with a Flight Data Recorder (FDR) and Cockpit Voice Recorder (CVR) as standard by the manufacturer?

It's not easy finding out which aircraft rolled-out with the first standard CVR/FDR combination. In fact it's so hard Google thought I was a robot, maybe I am.

Here's why, first this piece:

COCKPIT voice recorders that will record all flight-deck conversations between the crew and ground control will be required in large passenger aircraft under new rules issued by the Federal Aviation Agency. Designed to assist in accident investigation and prevention, approved cockpit voice recorders will be required by July 1, 1966, in jets and turboprops weighing more than 12,500 lb. Pressurized four-engine piston aircraft will have to meet the requirement by January 1, 1967.

FDR's preceded CVR's and were already standard equipment on jets and turboprops weighing more than 12,500 lb. Then came the above CVR mandate to take effect by July 1966.

But, the CVR was not a new invention, and was already fitted to many aircraft, in fact, five months before the above piece we find this:

Trans Canada Airlines has taken a world lead by announcing that it will spend \$1,360,000 to equip all its 78 aircraft with maintenance recording equipment. The airline has been investigating the use of the Royston Midas system for more than a year and last October took the decision to equip its fleet. Final details of the actual installations are now being decided, preparatory to placing a firm order, some additional steps having been taken as a result of the DC-8 accident at Montreal last November. TCA are to have a 93-channel system covering engines, movable surfaces, hydraulic and electrical systems and 15min of cockpit voice, installed in a safe location in the tail of its DC-8, DC-8F, Vanguard and Viscount aircraft. The installation will cost \$20,000 for each of the larger aircraft and \$15,000 for each Viscount and will be performed at Montreal and Winnipeg.

Next airline to place a major order for Midas may well be TWA, who have been conducting a systematic and successful investigation of its application for some time. The RAF first equipped one Britannia of Transport Command and has now ordered five recorder systems and four complete playback installations, presaging much more extensive adoption. British United Airways have also been flying a Midas-equipped Britannia for some six months.

Trans Canada Airlines being the first to equip a CVR/FDR/QAR combo well before the FAA mandate.

The CVR being an Australian invention, some sources say CVR's were required in Australia before the US, but given how many aircraft manufacturers were there in the mid-60's, it's near impossible to know which one was the first.

No one was eager to market their plane as the first that tells you why you crashed.

Most articles I found from the 60's were CVR manufacturers promoting their new products, but no aircraft manufacturer mentioning them. Example below: 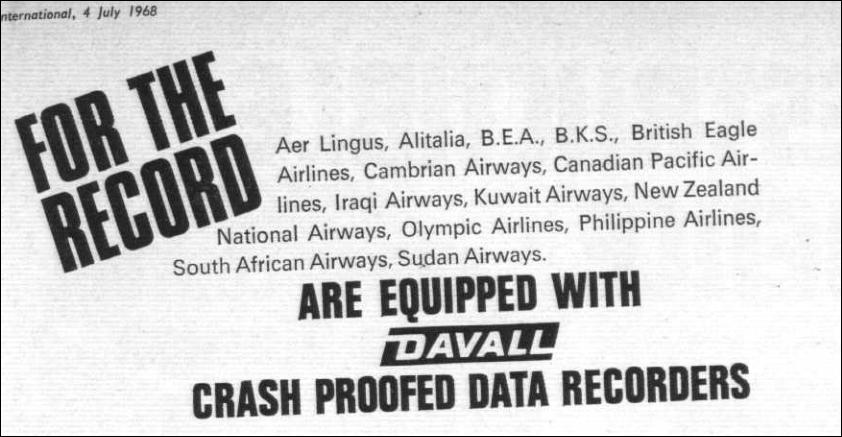 Not the answer you're looking for? Browse other questions tagged aviation-history flight-data-recorder cockpit-voice-recorder or ask your own question.

9
How is data transmitted to CVR and FDR?
8
How much data do FDR and CVR generate on commercial jets?
23
Why are FDRs and CVRs still two separate physical devices?
9
Are military aircraft required to have black boxes?
3
What was the first airplane fitted with a hydraulic system?
3
What is the smallest aircraft to have a CVR / FDR?
11
Are CVR and FDR reset after every flight?
2
Has a flight data recorder or cockpit voice recorder ever failed in an accident?
6
How long is the FDR data kept for?