Why are “counterweights” used in aircraft production?

From this question, manufacturers use "counterweight" or "ballast" when producing aircraft. Why is the use of weight necessary? Supposedly aircraft should be made as light as possible, and counterweight is just dead weight without any function.

I presume it is used to balance some centre of gravity, but why would that be necessary? With industrialized factories, components can be engineered to great accuracy, so a case-by-case adjustment to account for manufacturing errors should not be needed.

The counterweights in the original question were from a Boeing 747 rudder, so I will explain what their purpose is. John Walter's answer covers all applications of balances and ballast well enough, so I just want to explain why control surfaces need balances.

The short answer is: To bring the center of gravity on or even ahead of the elastic line of the control surface in order to limit gust loads and suppress flutter. The same is achieved for the full wing when jet engines are placed ahead of the wing.

First consider an aileron without a balancing mass. Its elastic axis is the hinge line and its center of gravity is maybe at a third of its chord, so it sits aft of the elastic axis. Now imagine what happens when the aircraft to which this aileron is attached flies through a positive gust: The wing bends up and inertial loads will keep the aileron from moving up with the wing. However, since it is attached to the wing at the hinge, its forward edge will be pulled up, resulting in a positive aileron deflection. This adds local camber and increases local lift, so the bending motion is intensified. At some point the wing stops moving up and the stored elastic energy reverses the bending motion: The wing starts to move down, and again will the aileron lag behind, now reducing local lift and again intensifying the bending motion. Watch this movie to see the resulting motion (the scary stuff starts at 2:40):

Now you might argue that in the 747 strong hydraulic cylinders keep the aileron from moving: Right, but still there is enough elasticity in the control system to let the aileron move a few degrees, which is enough to amplify the bending motion. The glider in the movie had high-aspect ratio wings of a rather elastic material (glassfiber-epoxy), so it flutters at a low speed where the energies and frequencies are low. Nevertheless, after the movie was filmed it had to be overhauled: The control fittings were almost completely worn out.

Now consider the same arrangement, but with balancing mass: The aileron will either stay neutral, if its center of gravity is in the elastic line, or will even counter the bending motion if the center of gravity is ahead of the hinge line. Both peak loads and flutter risk will be reduced. More agreeable control forces are just a side effect; the main reason is to keep the control surfaces or even the whole wing from breaking off.

The mechanism is the same for the rudder, but here the elasticity comes from the long fuselage tube which will be twisted by the side loads on the vertical tail. Again, only with enough balancing mass will the self-reinforcing nature of a twisting fuselage that swings the vertical tail left and right be avoided.

In the context of aircraft design and maintenance, the terms counterweight and ballast generally have separate and different meanings.

Both concepts involve mass used to balance, dampen, or adjust forces about a rotational axis. While ballast could also be described as a type of counterweight, it is best understood as working within the frame of reference of the entire aircraft since it adjusts the aircraft Center of Gravity (CG). Conversely, counterweights can be understood to work within a frame of reference that is smaller than the aircraft as a whole, such as an engine or a control surface.

I will address each separately.

Counterweights are used to balance control surfaces about the axis of the hinge to avoid potentially dangerous control flutter. This balance is very important. Pilots typically check for counterweight structural security in preflight where able. Mechanics must recheck control surface balance after painting, and painting control surfaces is excluded from the list of preventative maintenance items that an aircraft operator can perform without a mechanics license.

It is this out-of-balance condition that can cause a damaging flutter or buffeting of an aircraft and therefore must be eliminated. This is best accomplished by adding weights either inside or on the leading edge of the tabs, ailerons, or in the proper location on the balance panels.

The following excerpt from the Cessna 172M IPC shows the elevator counterweights, 23, highlighted in blue: 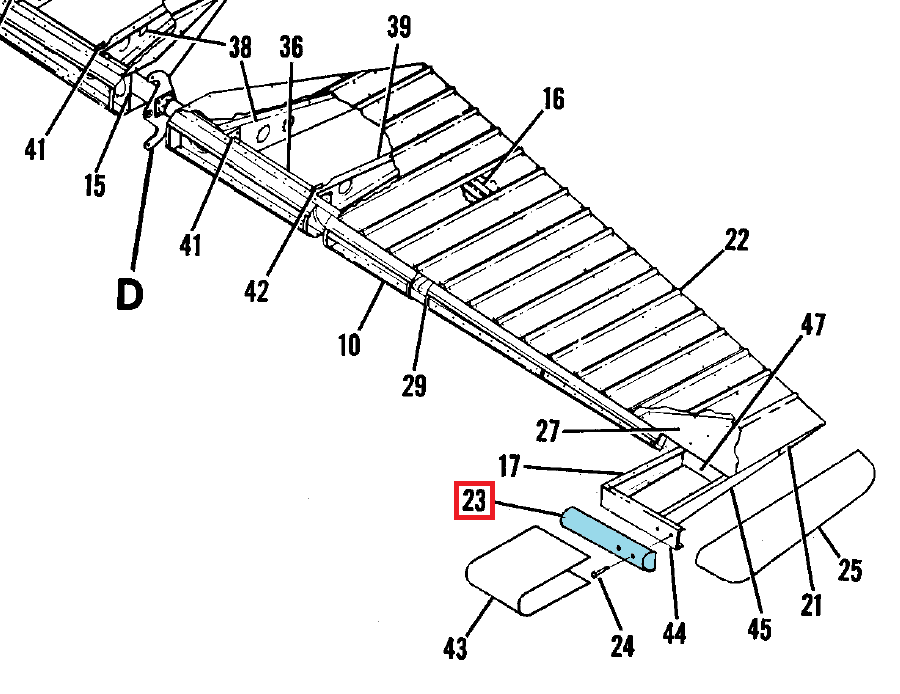 Feathering is accomplished by releasing the governor oil pressure, allowing the counterweights and feathering spring to feather the blades. This is done by pulling the governor pitch control back to the limit of its travel. which opens up a port in the governor allowing the oil from the propeller to drain back into the engine. The time necessary to feather depends upon the size of the oil passage from the propeller to the engine, and the force exerted by the spring and counterweights. 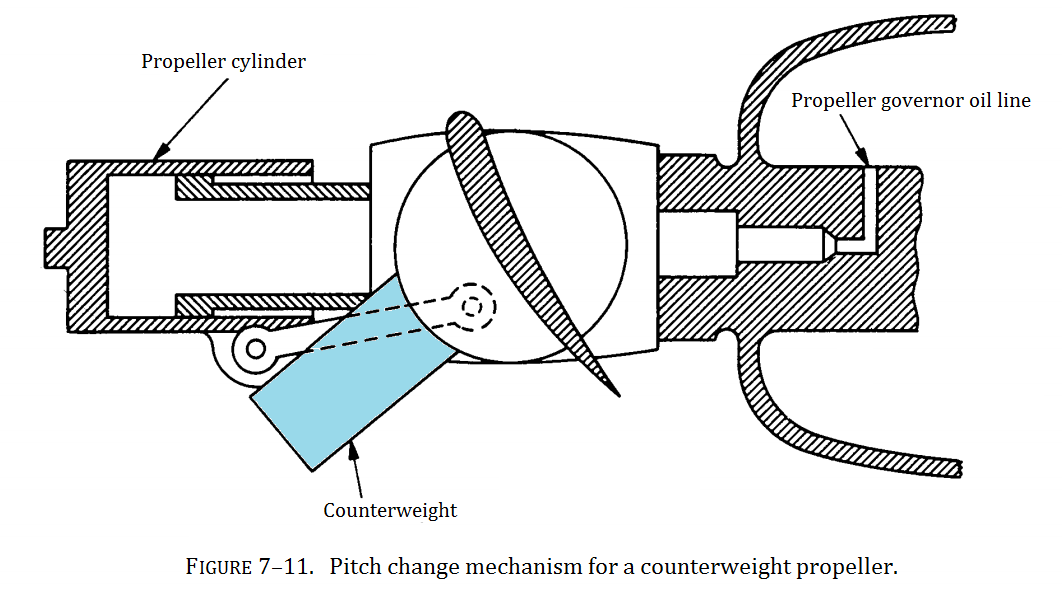 Counterweights are used in piston engines for both static and dynamic balancing.

Crankshaft Balance
Excessive vibration in an engine not only results in fatigue failure of the metal structures, but also causes the moving parts to wear rapidly. In some instances, excessive vibration is caused by a crankshaft which is not balanced. Crankshafts are balanced for static balance and dynamic balance. A crankshaft is statically balanced when the weight of the entire assembly of crankpins, crank cheeks, and counterweights is balanced around the axis of rotation. When testing the crankshaft for static balance, it is placed on two knife edges. If the shaft tends to turn toward any one position during the test, it is out of static balance. A crankshaft is dynamically balanced when all the forces created by crankshaft rotation and power impulses are balanced within themselves so that little or no vibration is produced when the engine is operating. To reduce vibration to a minimum during engine operation, dynamic dampers are incorporated on the crankshaft. A dynamic damper is merely a pendulum which is so fastened to the crankshaft that it is free to move in a small arc. It is incorporated in the counterweight assembly. Some crankshafts incorporate two or more of these assemblies, each being attached to a different crank cheek. The distance the pendulum moves and its vibrating frequency correspond to the frequency of the power irnpulses pf the engine. When the vibration frequency of the crankshaft occurs, the pendulum oscillates out of time with the crankshaft vibration, thus reducing vibration to a minimum.

Dynamic Dampers
The construction of the dynamic damper used in one engine consists of a movable slotted-steel counterweight attached to the crank cheek. Two spoolshaped steel pins extend into the slot and pass through oversized holes in the counterweight and crank cheek. The difference in the diameter between the pins and the holes provides a pendulum effect.

From the Continental O-300 overhaul manual:

C-145 and 0-300 crankshafts have a blade extending from each side of the cheek between No's 1 and 2 crankpins for attachment of dynamic damper counterweights. Each blade has two holes bored through and steel bushed. Slotted counterweights fit over the blades and have holes bored through and bushed to match those of the shaft. Bushings are sized to produce the desired frequency.

The following shows those counterweights on an O-300 crankshaft that is apart for overhaul: 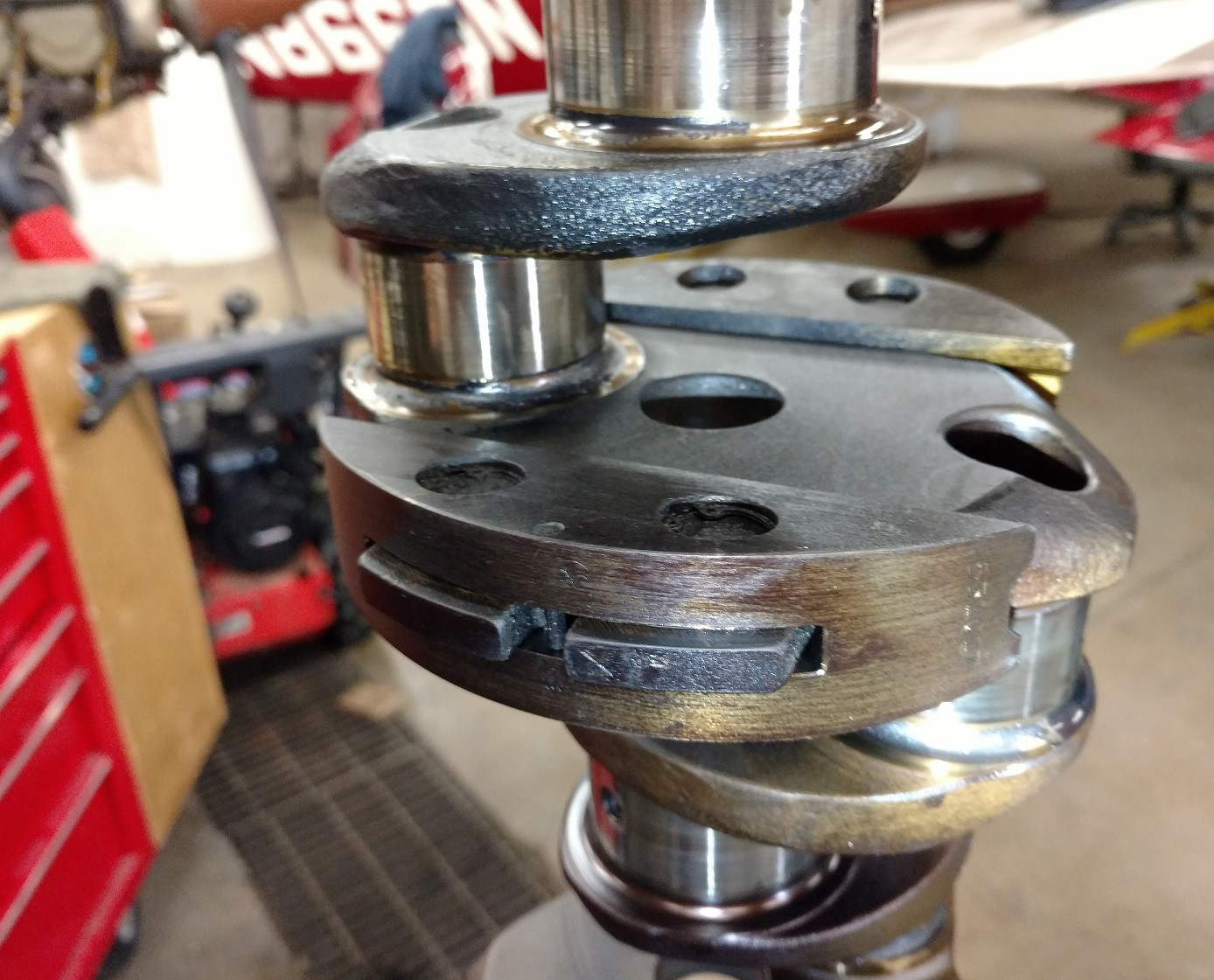 Ballast provides a temporary or permanent change to overall aircraft center of gravity. Ballast might be included as a permanent part of an initial or modified design. When I was in flight training we used old aircraft tires filled with concrete as ballast to place the W&B of a U206G near a max gross weight and aft CG configuration for portions of mountain flying training. I know glider pilots use ballast for adjusting aircraft CG as well.

From the A&P Mechanics General Handbook AC65-9A (this AC is cancelled, but this comes from my old print edition and is still accurate):

Ballast is used in an aircraft to attain the desired c.g. balance. It is usually located as far aft or as far forward as possible to bring the c.g. within the limits using a minimum amount of weight. Ballast that is installed to compensate for the removal or installation of equipment items and that is to remain in the aircraft for long periods is called permanent ballast. It is generally lead bars or plates bolted to the aircraft structure.

Temporary ballast, or removable ballast, is used to meet certain loading conditions that may vary from time to time. It generally takes the form of lead shot bags, sand bags, or other weight items that are not permanently installed.

Beyond the description be @Jonathan Walters there is also the requirement to put the center of mass of the entire aircraft within margins.

So a relatively simple measure to get more cargo room is to lengthen the hull of the aircraft in front of the wings.This puts more weight forward of the wings and rear landing gear decreasing its ability to fly and its ability to actually put cargo in the newly created space. Then if you counterbalance that with weights in the tail you can put more cargo into the front section and still do a proper takeoff.

Counter Weights are used to provide offset forces in the flight controls. This provides controls with better "feel" and "feedback" forces as well as reducing the required pressure to move the controls. This is also done with "tabs" that use air pressure for the similar reasons.

I have flown numerous aircraft ( light aircraft as well as small to medium sized jets ) that required additional ballast to offset imbalances in cargo or where passengers where sitting or just to balance the aircraft better when it was empty or had equipment or seats removed or just didn't have any passengers at all. I would sometimes use 25 pound bags of "Lead Shot" used for reloading shotgun shells as ballast in the aft cargo hold ( again this was in smaller aircraft such as private jets ). this might be 100 - 200 pounds as far aft as it could be placed to provide as much leverage as possible, as needed.

As far as trying to keep an airplane as light as possible, this is true, however, it is so critical for the aircraft to be "balanced" and is so impossible to do this through structural changes that the cost in weight of the counter weights or ballast is not a factor.

Not the answer you're looking for? Browse other questions tagged aircraft-manufacturer weight aircraft-production or ask your own question.

12
Why is the manufacturing process of an aircraft mostly manual?
6
Why is there typically a large gap between the first flight and mass production of aircraft?
26
What is the reasoning behind using depleted uranium as counterweights in the 747?
5
How much testing to commerical aircraft manufacturers typically do on each new plane after it rolls off the production line?
1
Where can I find data on past forecasts of planned aircraft production?
6
What is the meaning of first flight and introduction in aircraft production?
16
Why didn’t Boeing ramp 737NG production back up in response to the 737 MAX groundings?