What is the reasoning behind using depleted uranium as counterweights in the 747?

I recently found out that some of the earlier models of 747 had between 600 and 1100lbs of depleted uranium as counterweights. These counterweights were found in 747s manufactured between 1968 and 1981.

Given that the study linked above and the well-known radiation exposure for workers (and passengers) even prior to the 1968 introduction of these counterweights, why did Boeing (and McDonnell Douglas) decide to use such a hazardous (and potentially dangerous from a military perspective) material?

I understand that the weight/density allows for a smaller package, but it seems that the tungsten weights were integrated after 1981 without any space issues in existing aircraft. Was depleted uranium in such high supply that it was also more economical?

Eventually, the counterweights were replaced with these tungsten replacements: 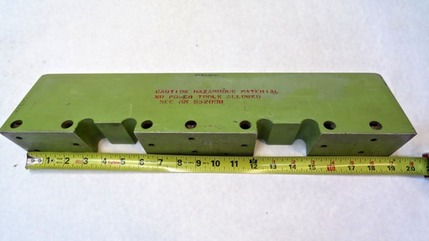 Boeing would have used DU because it had the right combination of physical characteristics and cost. Their tests showed that the radiation exposure for workers was low (2.6% of the statutory "safe" level). In most cases the exposure was so low as to be not detectable.

Passengers on aircraft are exposed to cosmic radiation at much higher levels than people on the ground.

On the ground the average American is exposed to 620 mrem/year from all sources.

Those flying from Washington DC to Los Angeles would be exposed to close to 2 mrem from cosmic radiation. This is not an issue for passengers but is something that airline crew and other very-frequent flyers are aware of.

Exposure to aircraft occupants from cosmic radiation is 600 times higher than from DU counterweights in the early 747 aircraft.

DU is Uranium from which the most radioactive parts have been removed. It is less radioactive than naturally occurring Uranium.

Heavy metals like Lead, Tungsten and Uranium are toxic if ingested. This toxicity is not due to radioactivity. Aircraft crew and passengers are not exposed to these metals in any way that could cause them to be ingested.

Boeing carried out safety tests on the material.

Based on the data from National Lead, reported in the section on exposures to the general public, dose rates to flight crew will be less than 0.8 microrem per hour. During a 2000 hour working year, this results in a maximum potential exposure of 1.6 millirem, less than 2% of the 100 millirem per year limit for members of the general public. This is only 1/600th of the 500 microrem per hour increase in dose rate from cosmic radiation flight crew experience at 39,000 feet.

Boeing Use of Depleted Uranium Counterweights in Aircraft. 1984. Retrieved from NRC

[W]hy did Boeing (and McDonnell Douglas) decide to use such a hazardous (and potentially dangerous from a military perspective) material?

Because it's not particularly hazardous and it's not very dangerous from a military perspective.

Uranium comes as a mixture of two major forms (called isotopes). Uranium-235 accounts for about 0.7% of the mix and is the isotope that supports nuclear chain reactions so is used in nuclear fuel and atomic bombs. (Actually, almost all nuclear weapons since the bomb dropped on Hiroshima have used plutonium but that's a different story.) Almost all of the rest is Uranium-238, which is only mildly radioactive. It doesn't support nuclear chain reactions, so it can't be used in a bomb. Depleted uranium (DU) is uranium that has been processed to remove almost all of the Uranium-235. In other words, DU is almost entirely U-238.

U-238's radioactivity is mild in two senses. First, it has an extremely long half-life of about 4.5 billion years, which is about the age of the earth. Second, most of the radiation it emits is alpha particles. Alpha particles are trivial to stop with even the most negligible "shielding": a piece of paper or even a few centimetres of air is enough. Human skin is good shielding against alpha radiation: the particles are stopped by the outer layers of the skin, which are already dead, and which are shed in a few days anyway. You're not going to get skin cancer from low-intensity alpha-sources.

U-238 is only really hazardous to health if it gets inside your body. When that happens, it's bad for you in two ways. First, it's toxic in much the same way as any other heavy metal. Second, if it's inside your body, then the alpha particles it emits are hitting living cells of your body, rather than your dead skin, so now it can cause cancers. Inhaling dust is a big risk, here, and that's why soldiers who've worked with DU weaponry can have problems. In the case of the counterweights, this risk is mitigated by coating the DU so people aren't coming into contact with it.

The military implications are small. DU has two main military uses: nuclear weapons ("Waaaait, I thought you said it couldn't be used for that!") and non-nuclear weapons.

Because of its density and the fact that it burns vigorously when finely powdered and exposed to the air, DU is used in some anti-tank weapons. According to Wikipedia, the coalition used more than 1000 tons of DU-based non-nuclear weapons in Iraq in a three-week period in 2003. Each 747 contained between a third of a ton and half a ton of DU, which corresponds to about ten to fifteen minutes' worth of ammunition. That doesn't seem to be a big concern.

Application of DU to nuclear weapons is, like everything else in this answer, in two ways. First, it's used in the "tamper" of a nuclear weapon, which reflects neutrons back into the weapon's core and allows smaller weapons to be made. Second, you can put U-238 in the right kind of nuclear reactor and make the exact kind of plutonium that's used for bombs. However, neither of these is a big concern because any organization that's capable of turning DU into nuclear weapons must already have enough infrastructure that they will already have their own large supplies of DU and not need to pillage it from 747s. In particular, they must already have nuclear reactors to convert DU to plutonium and isotope separators to extract the plutonium.

Depleted Uranium is 68% denser than lead and costs much much less as DU is a discarded material. Therefore, there were both space requirement considerations as well as cost considerations when using DU as a ballast or counterweight in aircraft.

Although precautions are taken, there are no substantial health concerns when using DU in this way. The radioactivity of the DU is no longer a factor as it has been depleted.

I'd say reason for using non-radioactive Uranium in counterweights is same as in perforating bullets: it has one of the highest specific gravity available, and this means a high weight, a higher inertia, momentum, within same volume, compared to other materials, including Lead.

Not the answer you're looking for? Browse other questions tagged aircraft-design boeing-747 weight or ask your own question.

27
Why are "counterweights" used in aircraft production?
15
Do all aircraft carry depleted uranium as counterweights?
4
How strong would a servo motor need to be to power the control surfaces of a fixed wing ultralight aircraft?

11
How heavy are the Boeing 747 landing gear?
8
What are these strange blades behind the N1 fan in a Boeing 747-8 engine?
9
What are those in the belly of a 747?
1
What are the weights of vertical and horizontal stabilisers of a Boeing 747-400?
9
Could the filming of the 747 in "Awakenings" have taken place during the 747 flight testing?
14
What's the reasoning for safety wire on aircraft, and the reasoning behind the way it's routed?
17
What is the reasoning behind Kamov twin-rudder design?
15
Do all aircraft carry depleted uranium as counterweights?
8
What is the weight of the fuselage (only) of the Boeing 747?
1
How tall is the 747-300 without the tail height?