What are the correct names for the two faces of an airfoil?

When representing a wing airfoil, often: 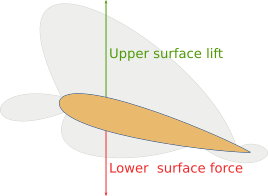 So the airfoil faces can just be called upper and lower surfaces and we easily understand their role in the lift generation.

But things can get more ambiguous when the lift is not directed upward, e.g. for the rudder airfoil or, even more, for a blade of a compressor which rotates continuously while the lift remains constant related to the airfoil.

Are there names to identify the faces in relation with the direction of the lift, e.g. "the lift face" which could be used not only for wings but also when the airfoil is vertical?

I'm asking this question because in French we have other names:

(We have some historical ambiguity between incidence and attack angles, depending on the author, as visible here.)

This has been used in a number of cases- for example in NASA Report CR-1767 Section Data for Thin, Highly Cambered Airfoils in Incompressible Flow:

for airfoils and in National Energy Technology Laboratory Handbook:

Not the answer you're looking for? Browse other questions tagged aerodynamics terminology airfoil or ask your own question.

30
Principle of aerodynamic lift: are misconceptions also taught in flight schools?
3
What is the best airfoil for Edge 540 Style Aircraft?
6
How do I choose the correct NACA airfoil for my requirements?
5
What is the name of this airfoil?
14
What amount of lift would be created in the fallacious “lift from equal transit time” theory?
6
What are the conditions for an airfoil to be a “thin airfoil?”
4
How do I choose the correct airfoil?