How wide is the cone of confusion above a VOR and NDB?

The value +/-40° is correct, but need to be interpreted. The primary reason of the existence of a "silence" (confusion) cone is a design choice to increase navaid range. Range and "isotropy" are antagonistic.

However, when the aircraft approaches the confusion cone, say at 45° elevation, while flying at 9 km above the station, its slant distance to the station is about 13 km. Even with a small apparent power (say a few RF watts), the radio link being not attenuated by obstacles, is still very good. It should not prevent the signal from being demodulated.

There is a second phenomenon, which is more critical for a D-VOR: The Doppler shift is created by the antenna scan in the horizontal plane only, and is maximum when the receiver is on the station plane. As the relative elevation increases, the apparent displacement in the direction of the receiver is reduced. This reduction of the distance results in a reduced apparent velocity toward/away from the receiver, hence a smaller Doppler shift. 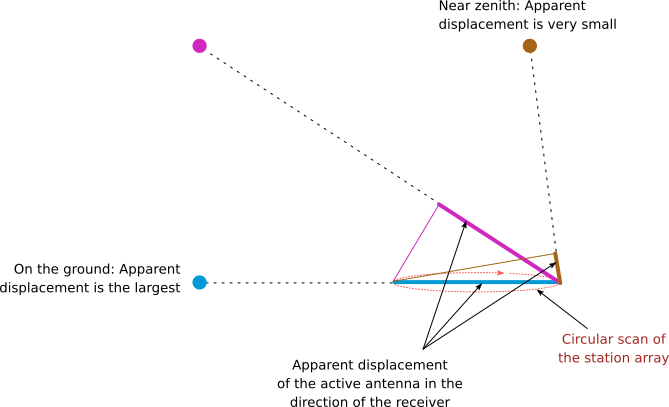 Without the correct shift, -480 Hz to +480 Hz, bearing determination is inaccurate (for a detailed explanation of VOR principles, see this answer). For conventional VOR there is a similar problem but related to the amplitude.

A VOR radiates a signal that can be interpreted in the horizontal plane, so the system is designed with antennas radiating horizontally. There are two types of VOR, the most modern is the D-VOR (Doppler VOR). A common antenna for D-VOR is the Alford loop antenna which is horizontally polarized: 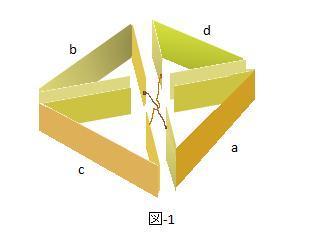 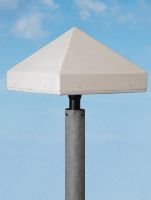 The D-VOR antenna system consists of a circular array of antennas:

This array has a radiation pattern similar to this in the vertical plane: 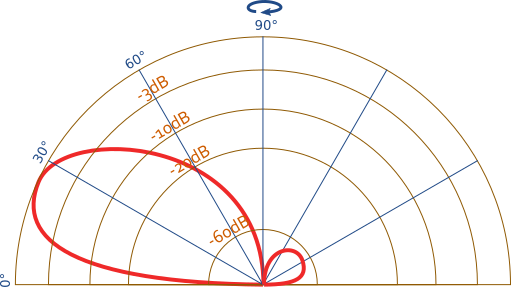 Specific to the D-VOR, due to the way this VOR works:

However the Doppler effect can be sensed only when the receiver is on the same plane than the electronic "displacement", i.e. the horizontal plane. When the receiver is located too close to the VOR zenith, the frequency shift becomes small, and cannot be sensed correctly. This is why, even with an isotropic antenna, the system cannot work at high relative elevations. So there is actually no point to have an isotropic antenna for the D-VOR.

A conventional VOR (C-VOR) works with a vertical antenna which radiation pattern is naturally similar to the one above without the need for interferences. The antenna actually rotates physically.

NDB use long wire antennas of many kinds. The power is radiated with nearly no particular preference (omnidirectional antenna), but the radiation pattern is still similar to the C-VOR one, except that there is no need to rotate it. The donut volume is obtained with the antenna stationary.

As the NDB is omnidirectional, the energy in the horizontal plane is not focused as strongly as for the C-VOR and D-VOR. However NDB range is still reasonable because:

Why is that done this way?

You may ask why not using an antenna (or an antenna array) with a circular radiating pattern radiating the same power in any vertical direction. Such "isotropic" antennas exist in practical.

The reason is the same than for rotating the antenna: It's to concentrate power in one direction, to increase the range. In technical terms this is to increase the effective isotropic radiated power (EIRP).

A good similarity is the one of a light bulb and a torchlight:

Isn't it too much?

No, it isn't. VOR's and NDB's are pretty old technology. VOR's were introduced in the 1930's and 40's, but are still commonly used today.

If you have a cone of confusion of 45 degrees to all sides, this means that, at 40.000 feet, the signals will be unreliable within about 6 miles from the beacon - which isn't really that much. At lower altitudes, say 3.000 feet, the cone of confusion will only be half a mile on all sides of the beacon. These inaccuracies are considered when designing procedures that depend on VOR's or other radio beacons.

Not the answer you're looking for? Browse other questions tagged navigation vor radio-navigation or ask your own question.

19
How does TACAN work?
21
What is the difference between conventional VOR and Doppler VOR?

7
Why do we need DME or RNAV when using VOR navigation above FL240?
21
What is the difference between conventional VOR and Doppler VOR?
13
Can a pilot use their GPS/FMS to fly a VOR or NDB approach?
4
How does one reverse direction on a VOR radial?
1
How do I do these VOR time and distance calculations?
4
Just how inaccurate are (Las Vegas) VOR radials?
0
Do we need to know the true track to a VOR?
8
Why is the VOR reference and variable signal modulated at 30 Hz?
13
Why am I not getting the "TO" VOR flag as I think I should?