Why would an approach be Cat A NA?

I was looking at the RNAV (RNP) 6 approach into Gunnison (KGUC) and noticed something quite strange: 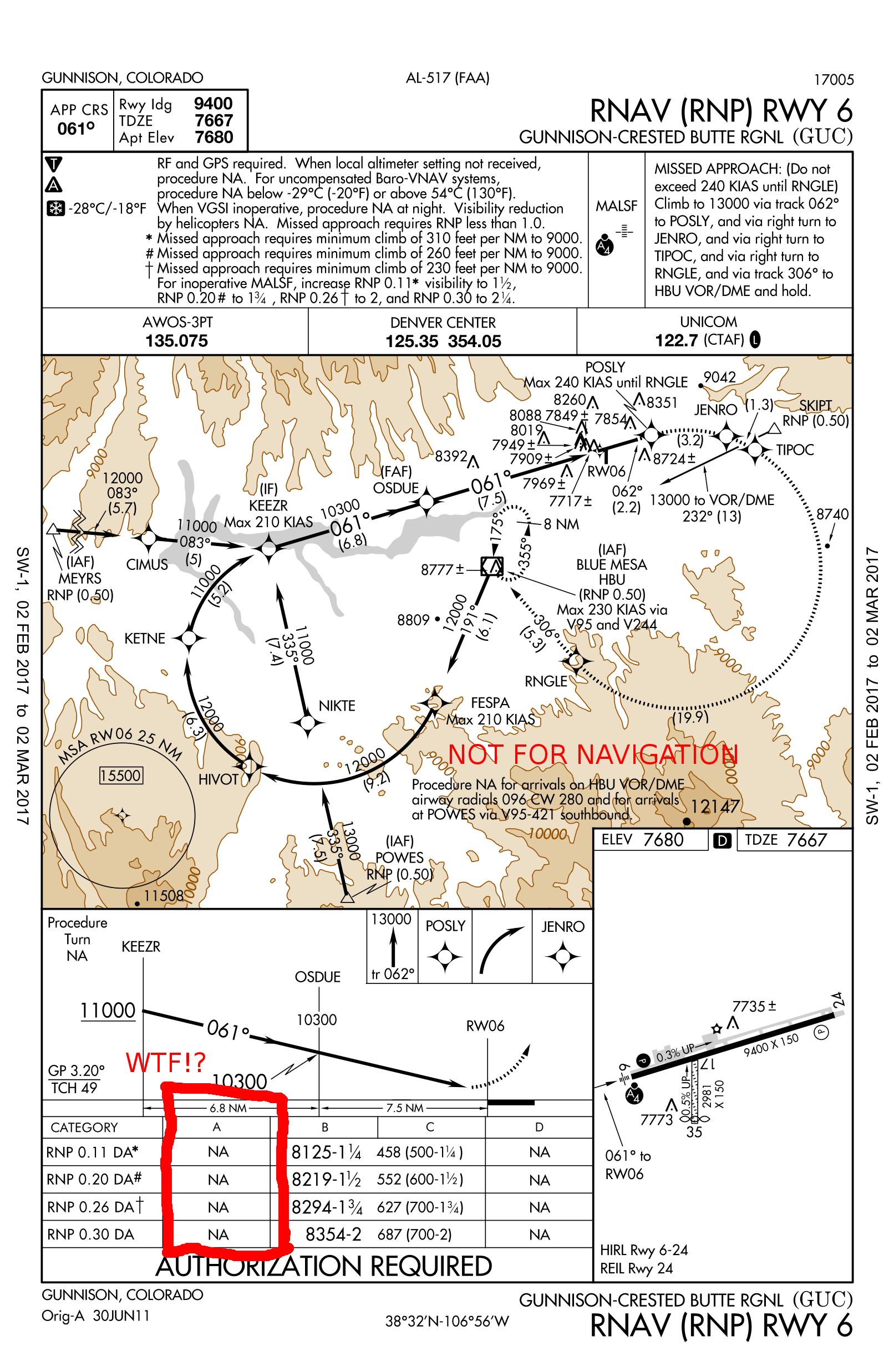 If the image isn't clear enough -- the approach is Not Authorized for approach category A aircraft (which of course includes every last helicopter on the planet). WHY would this be so? Is there some operational or technical reason a slow-moving category A aircraft or helicopter can't fly this approach, even though their avionics might be perfectly capable of doing so? Or is this some sort of charting error I should bug the FAA about?

Original answer: The speed of Category A aircraft is too low to execute the missed approach. For this particular airport, it's basically a hole in the ground with steep mountains on all sides. To go missed, you gotta get up in a hurry, and the TERPS data probably indicates a minimum speed is needed.

Edit: Despite the downvotes and comments stating that my answer was "unlikely", I'm sticking to my guns.

To make sure that I knew what I was talking about, I contacted the FAA's Flight Procedures Standards Branch in OK City and eventually was put in contact with someone who was able to pull up the documentation on this approach.

Listed in the comments of the document he was looking at was this: "Ref 8260.52 CAT A -- final approach speed is too slow for RNP missed approach segment length for obstacle penetration."

Translation: whoever put this approach together did the math that is required, and the formula result was that speeds needed for obstacle clearance are not sufficient when using CAT A speeds.

Note 1: some math and formulas required to build an IAP missed approach procedure can be found in Chapter 4 of 8260.52. (https://www.faa.gov/documentLibrary/media/Order/ND/8260_52.pdf)

Gory technical details (or some insight as to why this oddity is the way it is):

The thing that makes this approach special is that not only is it a RNP AR approach, the missed approach requires abnormally precise navigation as well (i.e. RNP values <1.0). The length of this span of the missed approach (from the MAP to TIPOC) is bounded by the results of formula 4-3-8 in 8260.58A, which is dependent on the true airspeed of the slowest aircraft of the approach.

In the case of the KGUC RNAV (RNP) 6 -- the MAP to TIPOC span is 6.7NM along track, which is longer than the formula's results no matter which of the three possible RNPs are applied if you are using a category A airspeed (these results are applied to the whole span as per figure 4-3-5).

Why this formula is needed, and applied to the whole span for that matter, is a mystery, though -- 8260.58A gives no design rationale for this limitation, or why it is pegged to airspeed. A rationale is that navigation errors are cumulative though -- the slower you're flying, the more time you have to drift off course before you make it to the next "gate" where a higher RNP prevails.

Other approaches (even in similar terrain and with seemingly similar conditions charted) may not have this peculiar limitation, though -- the KRIL RNAV (RNP) Z 26 approach, for instance, also requires RNP < 1.0 on the missed approach, but for a shorter distance -- a mere 3.5NM from the MAP to TEROE, whereas the limit distance for Category A given the RNPs used in the missed approach there is 4NM.

Moral of the story: pay attention to your approach plates!

28
If there is a misprint on an instrument plate, is a pilot required to comply with it?
5
Why are the minima for Cat A higher than for other categories at KSEA ILS 16L?

8
Which approach category minimums should I use when conducting an instrument approach?
13
When flying a circling approach, is it permitted to begin the visual circling segment prior to the final approach fix?
13
Are crossing restrictions on an ILS/LOC approach mandatory when flying on the glideslope?
4
KIBM RNAV (GPS) 10 -- did I find a charting error, or what is the TERPS rationale for this?
9
Why do the RNAV (GPS) approaches to KAPC not use the same missed approach procedure as the ILS/LOC approach?
8
How do you determine whether you can us LNAV/VNAV minima on an RNAV approach?
8
What runway alignment should I expect from a straight-in approach?
7
Why are some LNAV/VNAV mins lower than the LPV mins for the same approach?
5
Why are the minima for Cat A higher than for other categories at KSEA ILS 16L?
3
How can a pilot become established on the KBIV, ILS or LOC Rwy 26 Approach?