What are cowl flaps?

What are cowl flaps and what are they used for? It seems I have only heard of them in connection with old planes, are they peculiar to radial engines?

They are flaps or doors on the engine cowling that open up in order to provide increased cooling airflow for the engine. They look like this when open. They are generally controlled by a handle in the cockpit (some aircraft have electric cowl flaps with an open/close switch). 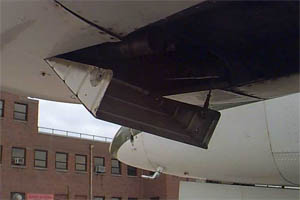 The disadvantage is that the open flaps also increase drag. So on airplanes equipped with cowl flaps, they are generally opened for low-speed, high-power situations such as takeoff. This is the harshest operational regime for the engine since it is at its highest power and relatively low cooling airflow due to low airspeed. They are then closed either reaching cruise or reaching a point where the airplane can transition to a lower-power, higher-speed climb profile.

They're not specific to radial engines, but do tend to be more common in older aircraft (there are exceptions though). Newer airplane and engine designs are more likely to have sufficient inherent cooling airflow to not require cowl flaps.

The photo above comes from AVweb, which also has a nice article explaining more about the function and usage of cowl flaps.

Cowl flaps are used for engine cooling and you'll find them on many high performance piston aircraft. They are particularly useful during climbout when you are at a high power setting and slow(ish) airspeed. Opening the cowl flaps allows more airflow across the engine but produces some drag. They are typically mounted on the bottom of the engine cowling.

19
What is the difference between flaps and slats?
22
Why are Inline Engines more commonly used than Radial Engines?
15
Do nacelles around aircraft engines help in reducing the engine sound?
30
How "over-engineered" were old planes and how "over-engineered" are they now that we have more advanced testing and research options?
14
Why are the outboard Krueger Flaps retracted before the others on the B747?
7
Does the aerodynamic center move when flaps and slats are deployed?
4
Why are overwing engines so rare?
22
What are the least powerful airplanes that ever flew?
4
Can you fly 2000 miles on an engine that costs less than $500k? If so, what type of engine?
4
Has there ever been a centrifugal turbine in an aircraft engine?