What permits are needed to operate a human-flying drone in the United States? 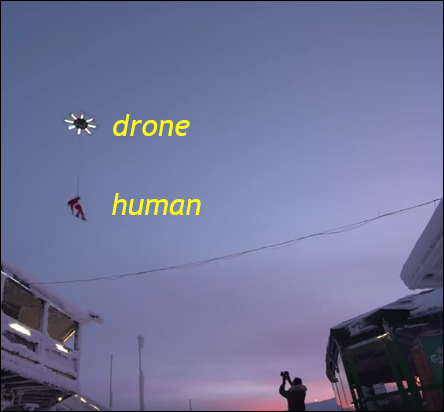 If Casey Neistat were to be flown with the human-flying drone in the United States, what licenses / permits would be required from the FAA to make it legal?

To fly a UAS that weighs 55 lbs. or more, operators will need to use the existing Section 333 exemption process.

The Section 333 page has further links. Spot checking some of the approved exemptions shows that the exempted status tends to look quite a lot like the 14 CFR 107 (sUAS) rules and include phrases like "carrying no passengers or crew", "weighing less than 55 pounds including payload".

As far as pilot certification would be concerned, exemption 11422 (which is one I spot-checked with) says:

Under this grant of exemption, a PIC must hold either an airline transport, commercial, private, recreational, or sport pilot certificate. The PIC must also hold a current FAA airman medical certificate or a valid U.S. driver’s license issued by a state, the District of Columbia, Puerto Rico, a territory, a possession, or the Federal government. The PIC must also meet the flight review requirements specified in 14 CFR §61.56 in an aircraft in which the PIC is rated on his or her pilot certificate.

So, the FAA could decide to issue an exemption under section 333 for such a flight, and declare whatever limitations they wanted (or, of course, reject it outright). If approved, I'd expect it to come with limitations like:

(Every other restriction I could think of is already part of 14 CFR 107, and the carried human would probably be treated equal to a wing walker... and I can't dig up any extra restrictions regarding them)

Not the answer you're looking for? Browse other questions tagged faa-regulations unmanned-aerial-vehicle or ask your own question.

12
What security clearances does a foreign citizen doing a flying course in the United States have to pass?
6
Can an Iranian citizen attain ATP in the United States?
5
Should people flying UAVs be called "Operators" or "Pilots"?
6
How are operators of small UAS craft supposed to know about flight restrictions?
10
What FAA rules govern tethered, outdoor UAV flight?
5
What restrictions are there for flying near urban areas in the United States?
5
What are the rules in UK law on carrying dangerous goods on drones?
11
In the United States, are ultralights legally considered aircraft?
5
What operational aspects of Alphabet's Wing drone delivery service will be the same as that of an airline?