Does the yaw damper require manual activation on modern airliners?

Modern commercial aircraft are equipped with yaw dampers. This post explains the feature. Now I was wondering if there is a button to manually activate and deactivate it (e.g., on a Boeing 787) or if the yaw damper is automatically activated when the autopilot is engaged?

On the 787 there is no activate/deactivate button for it. Yaw damping and turn coordination are always active as long as the flight controls law is in primary mode. In secondary or direct modes, yaw damping becomes degraded.

On an older generation plane, for example the MD-11, there are buttons for the yaw damper, 4 in fact for the 4 channels, they are rarely used (always on) unless there's a fault and after troubleshooting you want to take a channel out. 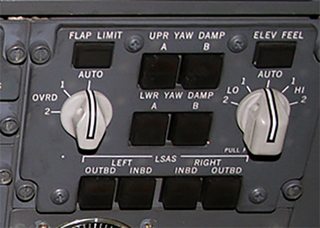 I suspect the rationale back then (carried over from earlier 737 variants) was you can't have the switch on the "on position" and the fault light illuminated when there was no fault. (The yaw damper needs a functioning ADIRU, which needs input from the IRS.) 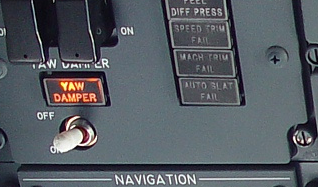 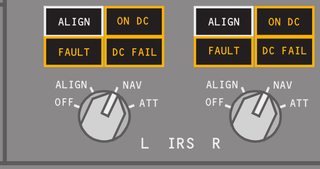 (airliners.net) Yaw damper and IRS controls on the 737 overhead panel.

Not the answer you're looking for? Browse other questions tagged airliner aircraft-systems boeing-787 yaw-damper or ask your own question.

18
What is the "yaw damper"?
4
Is the Boeing 737 MAX 8 MCAS exceptional in operating when autopilot is off?

18
What is the "yaw damper"?
13
Do the engines still spool up when reverse thrust is selected, but the reversers are not deployed?
13
Why does carburetor icing require manual attention by the pilot?
4
Can light aircraft be equipped with yaw damper?
28
What's the UX in modern airliner avionics for diversion choices, and does it integrate to autopilot?
7
How can I switch off the yaw damper in an Airbus A350?
11
Why did the Boeing 787 switch back to separate IRS systems?
5
Why is the 707’s yaw-damper-out lateral controllability marginal to nonexistent with flaps and spoilers extended?
1
Is there any difference between Airbus and Boeing on yaw damper technology?