Why do the outer parts of wings generate less lift?

In this Wikipedia page it says:

Constant chord: parallel leading & trailing edges. Simplest to make, and common where low cost is important, e.g. in the Piper J-3 Cub but inefficient as the outer section generates little lift while adding both weight and drag.

Why does the outer section generate less lift?

The outer wing section generates less lift because flow around the wingtips reduces the pressure difference between both sides. This effect dies down quickly when moving inboard, but will still reduce lift somewhat at the wing root. 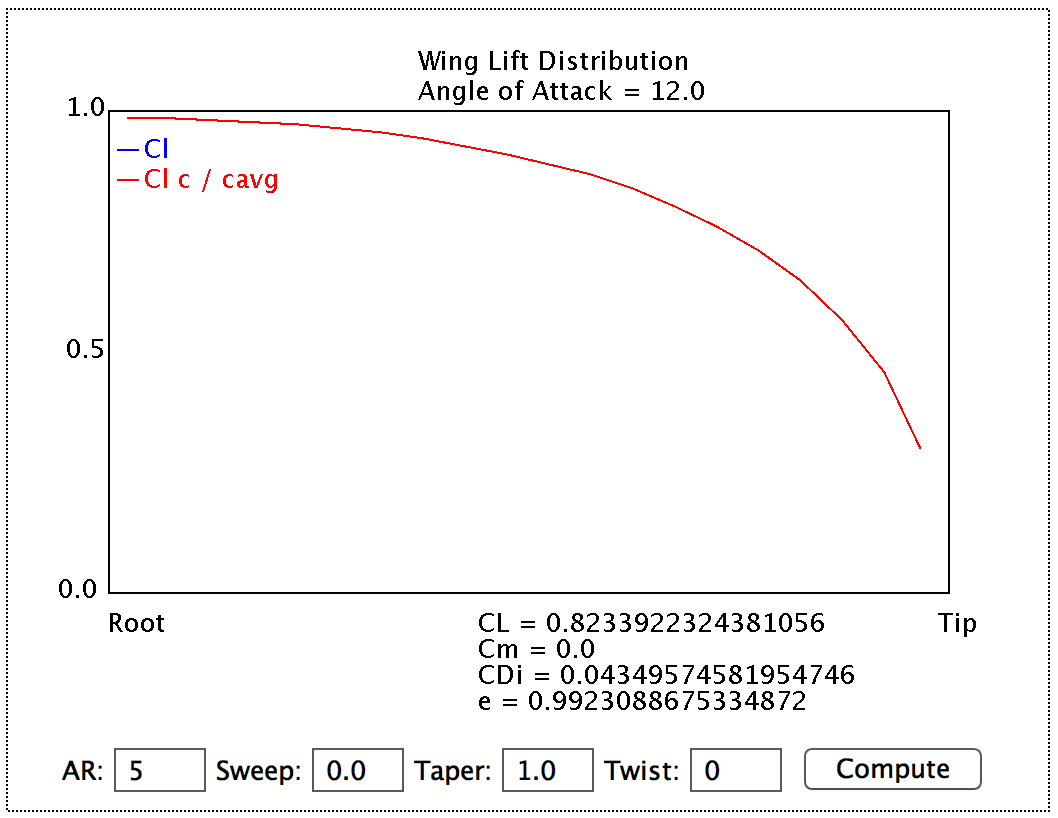 Screenshot of the Stanford Aero wingcalc page. This is a Java page for which you need to add http://aero.stanford.edu/wingcalc.html to the exceptions list in Java. Then you can change aspect ratio, wing sweep, taper ratio and twist. Here the lift distribution for an unswept, untwisted rectangular wing is shown which has a local lift coefficient of almost 1 at the center. Due to the low aspect ratio, wing efficiency is still at 99%

A rectangular wing can be optimal if stall characteristics and ease of construction are included:

If the goal is a simple to build aircraft with forgiving stall characteristics, the rectangular wing will be an efficient choice, especially when bracing is used. Only when performance is most important will a rectangular wing be less efficient than a trapezoidal wing.

From the Wikipedia page's sources, it appears that aerodynamics is the main reason that outer parts generate less lift.

The second apparent advantage is aerodynamic, and has to do with the drag penalty associated with lift,the so-called induced drag. Induced drag cannot be eliminated, but it is at its minimum when the spanwise distribution of lift is elliptical. Equating area distribution with lift distribution (a big conceptual leap, but let's make it for the time being), the argument goes on to assert that a rectangular wing deviates greatly from the elliptical ideal, especially near the tips, whereas a moderately tapered wing or a double-tapered one, with a straight inner section and a tapered outer section approximates the ellipse much more closely.

When producing lift, air below the wing is generally at a higher pressure than the air pressure above the wing, while air above the wing is generally at a lower than atmospheric pressure. On a wing of finite span, this pressure difference causes air to flow from the lower surface wing root, around the wingtip, towards the upper surface wing root. This spanwise flow of air combines with chordwise flowing air, causing a change in speed and direction, which twists the airflow and produces vortices along the wing trailing edge. The vortices created are unstable, and they quickly combine to produce wingtip vortices.

Wingtip vortices modify the airflow around a wing. Compared to a wing of infinite span, vortices reduce the effectiveness of the wing to generate lift, thus requiring a higher angle of attack to compensate, which tilts the total aerodynamic force rearwards.

A rectangular wing produces stronger wingtip vortices than a tapered or elliptical wing, therefore many modern wings are tapered.

Similarly, for a given wing area, a high aspect ratio wing will produce less induced drag than a wing of low aspect ratio because there is less air disturbance at the tip of a longer, thinner wing. Induced drag can therefore be said to be inversely proportional to aspect ratio.

This NASA study goes into detail mathematically and describes why the spanwise distribution of lift must be elliptical to minimize drag.

0
why lift is greater at wing root
31
What is the immediate cause of stall?
12
How is the induced drag calculated for a wing with elliptical planform?
7
Why are modern aircraft wings often pointed instead being more rectangular?