An aircraft carrier has massive spinning gyros to keep the ship upright against waves. Do planes of any type have gyros like those used in satellites? Not instrument gyros. In the picture below spinning this one when suddenly stopped could move the plane in flight significantly allowing it to correct from a flat spin? It would spin in the event of a flat spin and stop suddenly to correct it, but it would not spin in normal flight. Or it can be used to shoot backwards momentarily. Can they be used this way for more control of the plane with the fins? 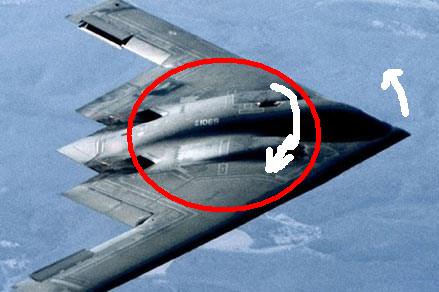 I actually have a lot of experience in the shipboard systems that you are talking about.

First, the gyro's do not keep the boat upright, they counter the rolling effect of waves but they cannot completely remove them. Gyro's of all designs work on the principle of conservation of angular momentum. That means that a spinning object will tend to impart a force 90° opposite of the force applied to it to conserve angular momentum.

In order for this to have a tangible effect on something of significant mass, the gyro itself (more specifically, the flywheel) must also have a significant mass. In shipboard systems this means that they usually use many (for an aircraft carrier, I would assume dozens even) of these devices that spin a flywheel weighing in the magnitude of tons. That is a lot of mass to be moving around!

So, taking into account that these gyros don't change speed very fast, and that they very heavily counter forces, you have a number of problems off the bat:

So could they be used to correct a flat spin? Not really. In order to counter the flat spin you'd have to have a gyro mounted 90° to the angle of the spin, and then change the momentum of the gyro to counter the spin. Flat spins are not (apart from what Top Gun may have you believe) impossible to recover from given altitude and control authority. This happens in the world of aerobatics quite frequently (and on purpose).

Can they be used to control the plane? Again probably not. You are talking about changing the angular momentum of a huge mass very quickly. This would work for the braking side, but not the speed-up side. That means you'd have an aircraft that can perform a maneuver once in one direction, then have to fly off while the aircraft builds up gyro's again.

By the way, spacecraft use control moment gyros that work by using gimbals to rotate a gyroscopic flywheel to impart a rotational force on the spacecraft. These work because of a reduced gravity/drag in the operational environment of the spacecraft itself. The masses don't have to be as big as they would on earth.

Big rotating masses were once fitted to light aircraft, but for propulsion, not for control. Those were called rotary engines, and they made the aircraft rather harder to control. Every commanded pitch motion would be accompanied by an uncommanded yawing motion and vice versa.

This answer discusses the effects of spinning masses in detail.

8
Do gyroscopic forces (from rotating engines) significantly affect yaw or pitch?
2
How can a flying wing style airplane recover from a spin without a vertical stabilizer?

7
Could a plane land inside or on top of another plane in flight?
2
What are the FAA's requirements for an experimental type certificate?
0
Could a helicopter fly like a plane this way?
2
Could this helicopter's body be a flying wing?
4
What type of airfoil do low-supersonic aircraft use?
1
What about a Plane-Train?