How does the V-22 Osprey share engine power between its rotors?

I learned through a comment on this question about multiple engines powering a single propeller that the V-22 Osprey can power both rotors from a single engine, or use both engines to power a single rotor. What are the mechanical systems that make this possible?

It is possible to drive the two rotors of the V-22 Osprey from a single engine using a segmented driveshaft connecting both engine shafts via gearboxes: 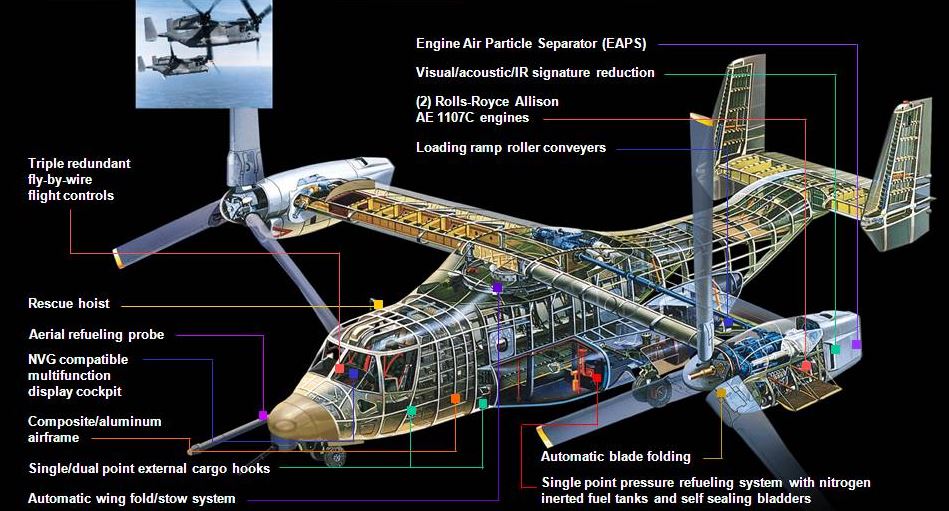 The drive shaft is depicted in blue in the left wing. Source

Each engine drives its own rotor and the connecting shaft. If one fails the same rotation speed is maintained, but each rotor receives now half the power of the remaining engine.

A similar mechanism is also used on the CH-47 Chinook family: 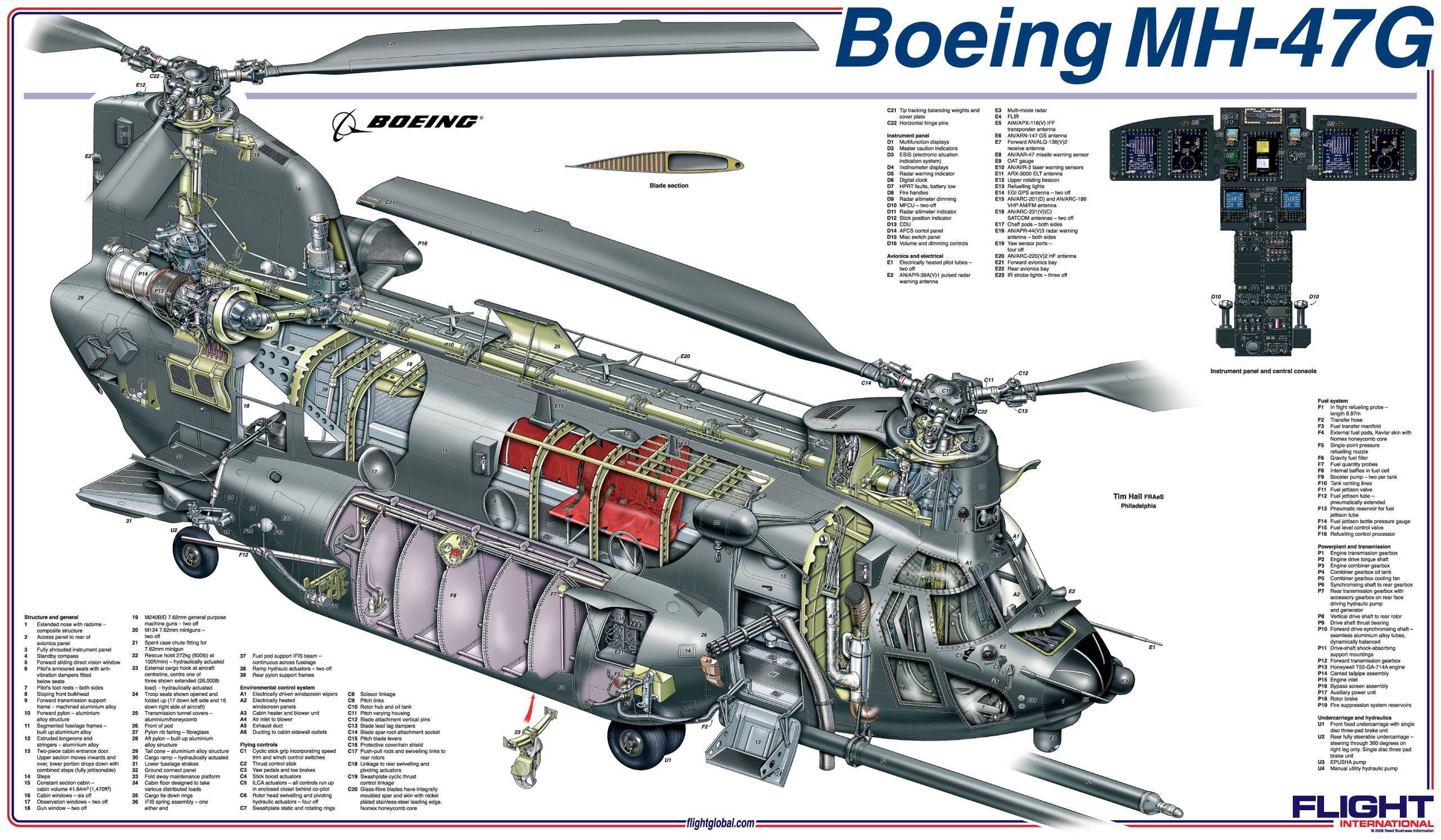 This is a CH-47 Chinook green drive shaft: 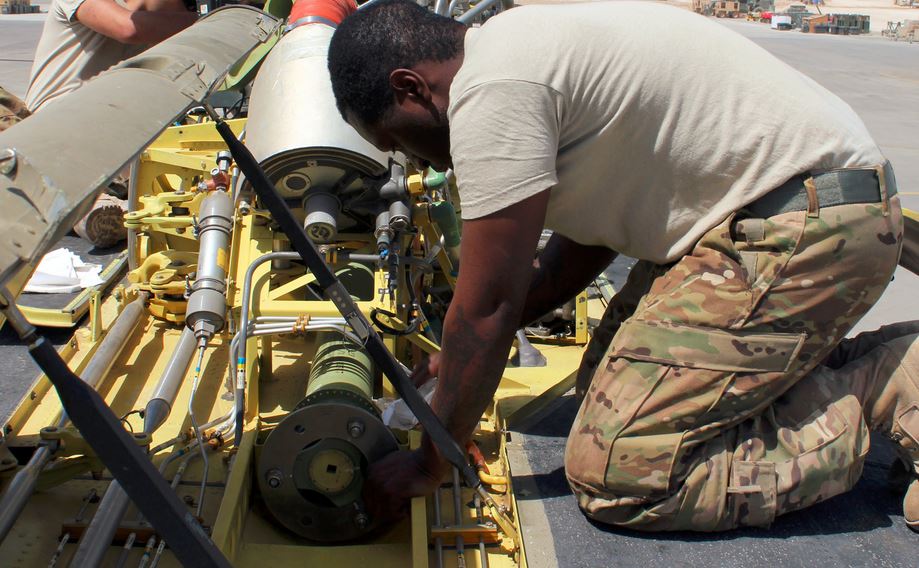 On aircraft with two distant rotors, it is vital to have both rotating, as if one slows or stops the aircraft is unbalanced to the extend it crashes.

Tilt rotors and virtually every other VTOL aircraft with more than one lift rotor (Chinook, K-Max) or proprotor (AW609) must employ a shaft between these lift units, so when one engine is out the other keep the units turning will half power (which doesn't mean half rotations per minute, but half maximum torque). That's why available power reserve on the engines of these aircraft is important; choosing engines that are 'just enough' for the normal job may deny their certification for obvious safety reasons. A failure or a simply deceleration of one rotor/proprotor would cause disastrous asymmetry of lift along the aircraft center of mass.

Also, many of these aircraft require the rotors to be permanently synchronized (and, therefore, connected) to simply avoid collision between their counter rotating blades. In tilt rotors, rotor sync is also beneficial when talking about vibrations, acoustics and symmetry of aerodynamic flow through the airframe. Finally, connected proprotors are also a solution towards simplicity regarding yaw: the AW609, for example, doesn't have a rudder, since it can yaw by simply changing the blades pitch of one proprotor (or changing both in opposite angle values).

That's why every aircraft with connected rotors/props and two or more power plants slowly spins all the blades even when only one engine is starting. Since the first transmission of output inside the engine is done through air without a mechanic shaft connection (using the free turbine solution), the engine doesn't suffer that much from overload. Over pressure in the combustion chamber may be an issue, but is easily addressed with bleeding valves and/or FADEC protections.

The details of those connection shafts are not very new, resembling the shafts that connects main and tail rotors on heavy helicopters of traditional design, but far more robust and having no reduction gears. They are basically assembled with the less amount of segments possible. The connections between them must be as precise as possible, withstanding some difference of torque between the segments in order to avoid over twist efforts that could lead to failure. Also, they can't absorb differences of angular momentum (like the springs on a manual car transmission clutch does) since this can easily evolve to a resonance between the rotors.

The cross shaft of the V-22 is normally unloaded. It only takes up the load if an engine fails, at which point everything continues as normal albeit with reduced power. Alternatively, if the shaft is damaged, but you've still got two good engines, the aircraft flies as normal because the shaft isn't being used anyway. On the CH-47, though, the shaft is always under load because that's how the front rotor is powered by the engines in the rear. If that shaft is damaged, it will result in an immediate loss of the aircraft, even with two good engines.

Not the answer you're looking for? Browse other questions tagged aircraft-design v-22 tiltrotor or ask your own question.

25
Has a fixed-wing aircraft ever been built that featured multiple turbines powering a single propeller?

4
Could a tilt quadcopter use turbofan engines?
25
Has a fixed-wing aircraft ever been built that featured multiple turbines powering a single propeller?
7
Why aren't contra-rotors used on the V-22 Osprey?
15
Can an ultralight aircraft fly with a 18hp engine?
5
How to calculate the power required during transition from VTOL to fixed wing?
5
Can Ospreys land without running engines?
0
What would be the advantages and drawbacks of a single-propeller tiltrotor?
3
Would it be beneficial to have rotors AND propellers instead of a tiltrotor?