How does a flight or squadron communicate when radio silence is in effect? 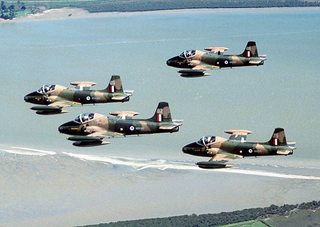 How does a flight or squadron communicate when radio silence is in effect?

If one pilot spots an unexpected target or danger, how is it communicated to their flight?

Rocking the wings? Kicking the rudder? A gun burst? What are the different non-verbal ways of communicating in such scenario?

To get attentions, usually the wings are rocked:

Attention in the air Execute rapid shallow rocking of wings.

The following are some of the distress reasons and corresponding signals:

Bailing Out or Ejection One or both clenched fists pulled downward across the face to simulate pulling an ejection face curtain.

Intercepting Signals The intercepting aircraft positions itself in front of and usually to the left of the intercepted aircraft and rocks its wings. This is a signal that the interceptor wishes the other aircraft to follow it. A responding irregular flashing of all available lights in this case indicates distress

In case of unexpected danger/target or where time is critical, the flight is allowed to break radio silence. The instructions states:

These signals reduce radio communications and permit pilots to communicate with each other during periods of radio silence. Use the radios if the situation permits, when time is critical, or the visual signals are creating confusion. (emphasis mine)

There were certain hand signals that I do remember from my years flying off the USS Nimitz in the 1980's. The ones I remembered were the most commonly used, e.g. what is your fuel status, reducing power, ascend, descend, gear down (for section approaches), gear up (for section takeoffs), etc. We flew with one another much like a family, and like a family we also had hand signals internal to the squadron that we used.

I wanted to reference a fairly complete guide of signals and found this beautiful training manual online: The Formation Pilot's Knowledge Guide. If you enjoy aviation it is worth downloading and at least skimming through. Very thorough treatment of formation flying. Really well written and diagrammed. See Appendix I for the hand signals, and find these 3 pages attached at the end of this text for convenient reference.

Before going on to some comments about in-flight communication let me note at least one difference in hand signals from what is referenced and what I used in the squadron. We used a different set of hand signals for answering a fuel status check. We gave our fuel state in pounds instead of time. The numbers 1-5 were signed with vertical fingers. The numbers 6-9 were signed with horizontal fingers, and a zero was a clenched fist. So there are certainly differences to be expected, but the list gives an idea of what situations are generally accounted for in standardized hand signals.

It is important to understand that when you are in formation as the wingman your responsibility is to stay on the lead's wing and maintain physical separation from their aircraft. Additionally, with a good prebrief and a steady lead the flight could take place without much communication. For example, during take off you knew your responsibilities, and you knew what things were to happen and when. So, for example, if the lead missed the hand signal for gear down on a section landing, it usually wasn't a big deal, although albeit a bit of a surprise. Or the wingman might be involved in their own tasks within the cockpit and miss the leads signal. That happened to me at least once, but hey, his gear were coming down. Mine came down in time without disrupting the flight. The same was true in the rendezvous circle, or in an attack. You stayed on the leads wing and protected the flight! We called it flight integrity.

As Naval aviators we took pride in terse radio communications. There were limited departure and approach frequencies, as well as ground frequencies. Each launch included between 15 to 20 aircraft, as I remember, and they all shared the same frequencies. There were times when we launched the Air Wing for a practice War-at-Sea Strike. In this case there might be as many 30 or more aircraft airborne. We kept radio communications to the minimum, often using mic clicks to communicate. The only time you might here "chatter" was while tuned the squadron's radio frequency, or on some pre-briefed frequency that the flight might use, but this wasn't common. We were pretty busy fulfilling our mission, and there wasn't a lot of time to chat.

A bit off-topic, but still dealing with communications without radios was EMCON procedures. There were times when the carrier exercised what is called Emissions Control, or EMCON. In this scenario aircraft took off, performed their missions, and landed without communications with the ship. The ship listened, and that is all it did. All electromagnetic emissions were shut down. It became a passive communicator, and capturing signals. And so here we are not talking about plane-to-plane communications, but silent aircraft to ship procedures (controller).

The 2 most difficult transitions were coming back to the ship and the pattern. It is a big ocean, and when I was flying the radar we had did not do a good job at discriminating targets on the sea. You had to find the ship, and it was fairly easy to lose the ship. There were tricks we used. Also, the landing pattern is a very crowded place with flights stacked on top of one another over the ship. The pilots controlled the pattern. One A7 squadron was the first down, and this was because in case the deck wasn't ready they usually had enough fuel to go around without getting into serious trouble. The F14's were above us, since they typically had lower fuel reserves, A6's were towards the top. The very crowded pattern was controlled by the pilots, all with little fuel reserves. This is easy enough during the day, but at night it can get pretty intense.

For completeness I will mention that there are a whole litany of hand signals used on the flight deck to manage the flow of traffic. This includes start up of the aircraft, taxiing, and then catapult procedures, as well as procedures for coming out of the wire. These can be found online fairly easily. The only time there was any communication on the deck was when there was an emergency. As a pilot you might be up a secondary frequency to get something straight with the flight members, but that was rare. You listened to your departure channel. The only call I remember making was when I got airborne.

Towards the terminal phase of the launch procedure you were taxied up and parked behind the aircraft getting ready to launch. That way it took only a minute or 2 after they took their shot to get you in the catapult and off the deck. One of the last things the aircraft in front of you does before taking the cat shot is to go to military power. To keep the aircraft waiting from getting damaged from the powerful jet exhaust big deflectors rise up out of the deck and direct it upwards. My mate was behind the deflector while an A6 was on the catapult at full power. All of a sudden the JBD lowered and the powerful exhaust caught his aircraft and pushed it towards the side of the deck. Okay, he used the radio. I can still hear him calling for "AJ401 CHOCKS, CHOCKS!"

Finally, it is worth mentioning this following example demonstrating how hand signals are developed out of a need, and in the end not always institutionalized. When we ask the question what hand signals there are and how they are used we can identify a set of institutionally accepted signals, as detailed below. These signals are derived from a need of pilots to communicate aircraft-to-aircraft. After a time these signals became codified. I had the honor of listening to several POW's describe their experiences in Vietnam. My CAG Commander had been a prisoner in Vietnam and I had the opportunity to talk with him about his experience in a personal setting. One thing I remember is that there was a POW who knew sign language and the prisoners used his knowledge within the specific need to build their own set of signals that could be used to communicate across the distances of the compound. 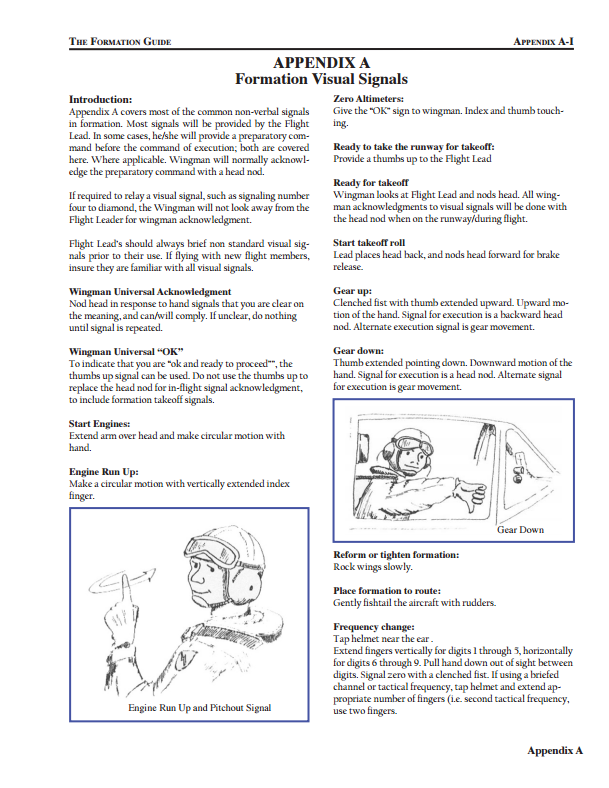 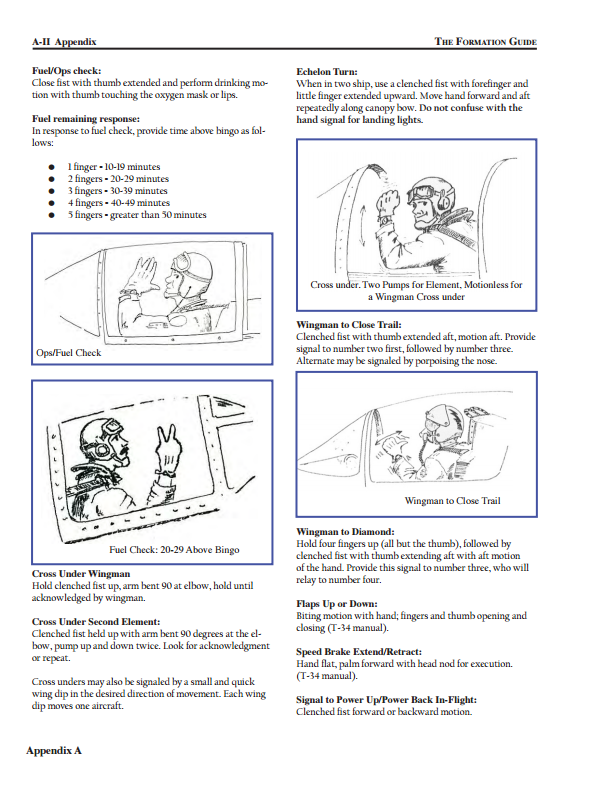 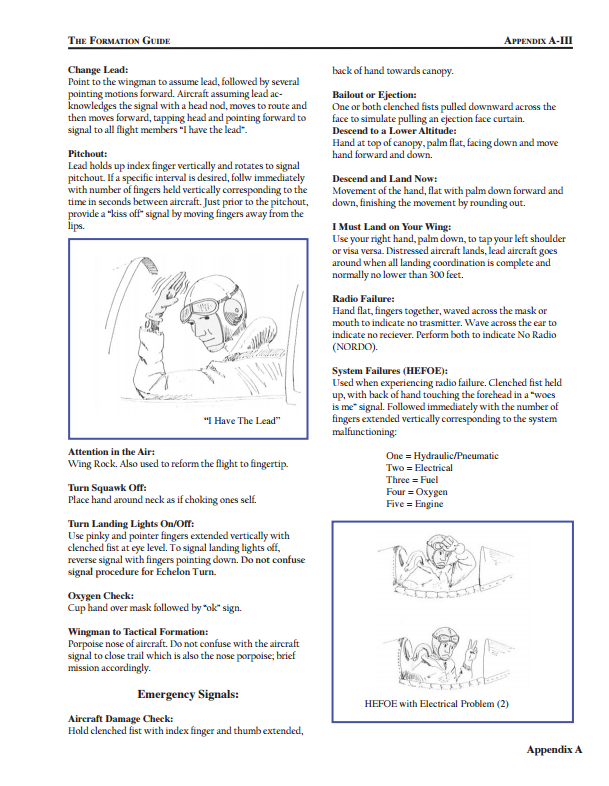 Not the answer you're looking for? Browse other questions tagged military radio-communications or ask your own question.