What is the fuel consumption of an aircraft in a holding pattern?

I am doing a research about fuel cost when an aircraft is about to land. they may be asked to be hold due to the traffic congestion at the runway. consequently they consume extra fuel. My question is how I can estimate the cost per minute or second being late of their *target time. Where can I get more details on this?

*target time: As I noticed each aircraft has a target time to land which is the most economical time and speed for them.

My research is about aircraft landing scheduling during rush hours where there are several objective functions such as maximizing the runway utilization, minimizing total delay and fuel consumption to be considered. these objective functions are subject to some constraints like aircraft's time window (earliest landing time,latest possible landing time), minimum time separation, Constraint position shifting... In the literature that I have read so far they considered a fix fuel cost as a function of delay. as an instance: "Vj denotes the cost per unit time of the extra fuel associated with lateness relative to ULTj , then the overall extra fuel cost is : summation of Vj * (Landing times - ULTj) " (Aircraft Runway optimization, Mesgarpour, 2012) Since it is more mathematically issue no body really pay attention to the details of that fuel cost or any other cost caused by the delay.

Every aircraft should have a published fuel-burn rate, typically measured in GPH (Gallons per Hour) or Pounds per Hour.

This rate does change a bit depending on ambient conditions (temperature & pressure), throttle, and weight. But its a pretty good planning rate.

There are other costs, beyond fuel costs, associated with delayed landings, such as crew costs and running the airplane and engines closer to their next inspections and service times.

The fuel rate while holding depends on elements such as weight, altitude, speed and aircraft configuration.

Airbus uses the concept of green dot which is the speed with minimum fuel consumption per time unit in clean configuration. 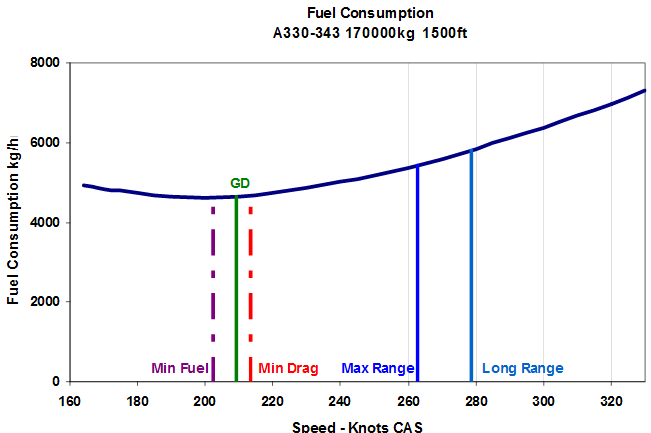 While the green dot speed is the one offering the best fuel rate while holding, it assumes no flap and no slat. This speed may not be practical for certain airports where slats or flaps are advisable due to the rate of turn in the holding pattern.

To provide the necessary flexibility, Airbus publishes the fuel rate for three other combinations of speed/configuration (S speed is the minimum speed for flaps retraction): 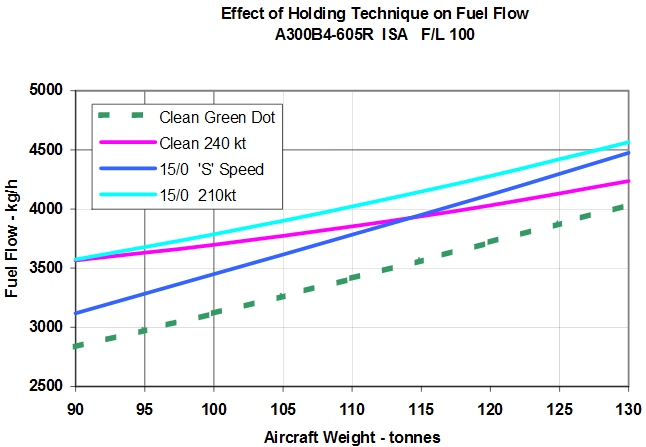 Altitude is also a factor preventing an optimal fuel flow. Example for the green dot speed: 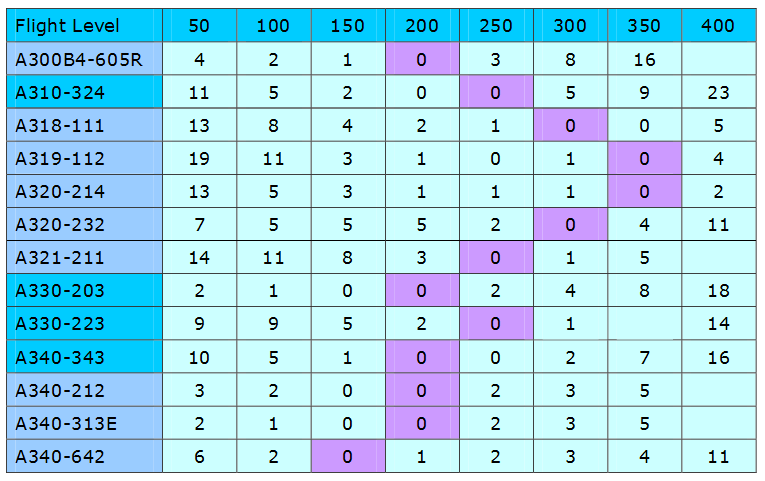 Percentage added when departing from the optimal altitude. Source

The total fuel required to hold can be somehow minimized by not flying at cruise speed when it is known that a hold will be required at some point. Savings can be done by flying at green dot speed to the holding point:

That means determining the fuel flow depends on airline operating procedures and holding pattern design (e.g. altitude), but a maximum can be roughly predicted by looking at the manufacturer published documentation.

To answer based on some data I had correlating aircraft in confirmed holding patterns (not speed-restricted en-route delays) vs. high altitude cruise, the short answer was: they use more - mostly because they were in low-speed manouevring, with flaps set. I'd have to look at the data again to remember how much more, but I recall it was fairly significant: at least compared to cruise. This analysis was done as part of a study the airline was using to calculate the cost of capacity constraints in the terminal area.

Not the answer you're looking for? Browse other questions tagged aircraft-performance fuel or ask your own question.

1
How to model aircraft fuel consumption during the approach?