Why are the top speeds for jet engines higher than for propellers?

I realize turbines are more efficient than piston engines, but if that were true, then why don't turbo-props reach jet speeds?

The thrust of a propeller is proportional to the inverse of airspeed, while the thrust of a pure turbojet is roughly constant over airspeed in the subsonic region. This means that two airplanes with the same static thrust, one propeller-powered and the other jet-powered, will reach very different top speeds.

And, no, piston engines are more efficient.

A piston engine produces a constant torque $\tau$, independent of speed. This torque drives the propeller which produces work $W$ per unit of time on the air passing through it. This work per unit of time is power $P$ and proportional to the product of torque and propeller speed $\omega$, which is again constant over airspeed $v$. The power to propel the aircraft is the product of thrust and airspeed and equals engine power times propeller efficiency $\eta_{Prop}$. When airspeed goes up, thrust must go down proportionally for power to stay constant. $$P = \tau\cdot\omega = T\cdot v\cdot\eta_{Prop}$$ $$\Rightarrow T \varpropto \frac{1}{v}$$

Turbojets, on the other hand, profit from flight speed because the intake pre-compresses the air when it slows down ahead of and in the intake. This pre-compression lifts the pressure level of the whole engine, so it sees an increased mass flow with increasing speed, producing higher thrust. This effect by itself would increase thrust in proportion with the square of flight speed, but the same effect which reduces the thrust of a propeller acts on a turbojet as well. This effect, however, is less pronounced because the jet accelerates less air to a higher speed, and both cancel each other, roughly.

Turbofans are more similar to propeller engines, so here the thrust goes down over airspeed, and more so for higher bypass ratios. Turboprops are even closer to piston-powered propellers, so their thrust drops even more with increasing speed. This means that the speed at which drag equals thrust drops when you move from turbojets to turbofans, and further to turboprops and is lowest for piston-powered propeller aircraft.

I'd like to visually illustrate why propellers aren't suited for high speed flight.

If you study the two sketches I drew above, you'll notice as the horizontal speed increases (right image), the thrust direction moves away from the forward, despite the increased airflow and local lift on the blade.

This is what many textbooks erroneously call "taking a bigger bite", but as you can see, it's the same bite (angle of attack). 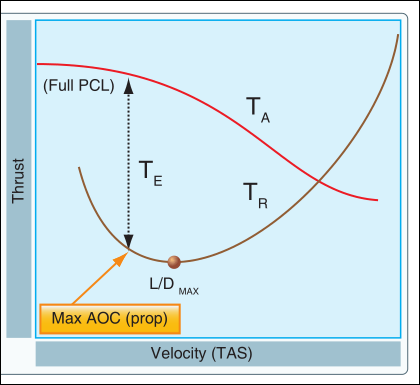 So the faster you fly a propeller, the lower forward thrust you get, making you unable to go any faster. Above graph shows TA (Thrust Available) for a propeller decreasing the faster the plane flies.

Another factor is when you fly as fast as the propeller's tip speed—say Mach 0.75 (a Boeing 737 Classic in cruise)—the airfoil of each blade will be flying much faster than your forward speed (compare the hypotenuse to the vertical/horizontal sides in the topmost image).

The airflow around the airfoil will be supersonic. Straight wings (and blades) don't do well in supersonic speeds (too much nasty drag).

It's best when the plane's forward speed keeps the propeller disk from approaching the sound barrier, and doesn't result in the thrust being directed too much away from the forward.

First off, to get going in the speed range you mention with a usable size propeller your tips will go supersonic which presents problems into its self. The XF-84H suffered from this and you can read up on why that was a noise issue.

On top of the noise issue it simply becomes more efficient to use a jet at those speeds so in practice its the power plant of choice. Many of today's top preforming turboprops easily encroach on the speed of light jets.

Not the answer you're looking for? Browse other questions tagged aircraft-performance propeller jet turboprop propulsion or ask your own question.

0
Why do turbofans go faster than turboprops?
1
How can jet engines be more efficient than propellers?
47
Why is the Tu-95 so efficient despite having propellers that spin faster than the speed of sound?
30
Why are propeller engines uncommon on airliners?
36
Which engine is more efficient between turboprop vs jet?
18
Why did the turbojet replace the piston engine?
24
In what way are the Concorde's engines considered efficient?
19
Are turboprops more efficient than piston engines (thrust per fuel consumption)?
25
Can propeller driven aircraft sustain speeds at or above Mach 1?
13
What is the fastest single-engine civil turboprop aircraft with cabin seating?
See more linked questions

32
Why do turbine engines take so long to spool up?
30
Why are propeller engines uncommon on airliners?
35
How does a fan differ from a propeller?
8
Why are contra-rotating jet engines so rare?
4
Why don't contra-rotating propeller configurations with more than two propellers exist?
17
Why is max endurance different for jet and props?
10
Why were turbojets the first kind of turbo-engines, instead of turboprops?