Can a supersonic plane use a subsonic wing if the nosecone shock produces subsonic airflow around the wing?

A supersonic plane will produce shock waves off the nose cone, as seen below: 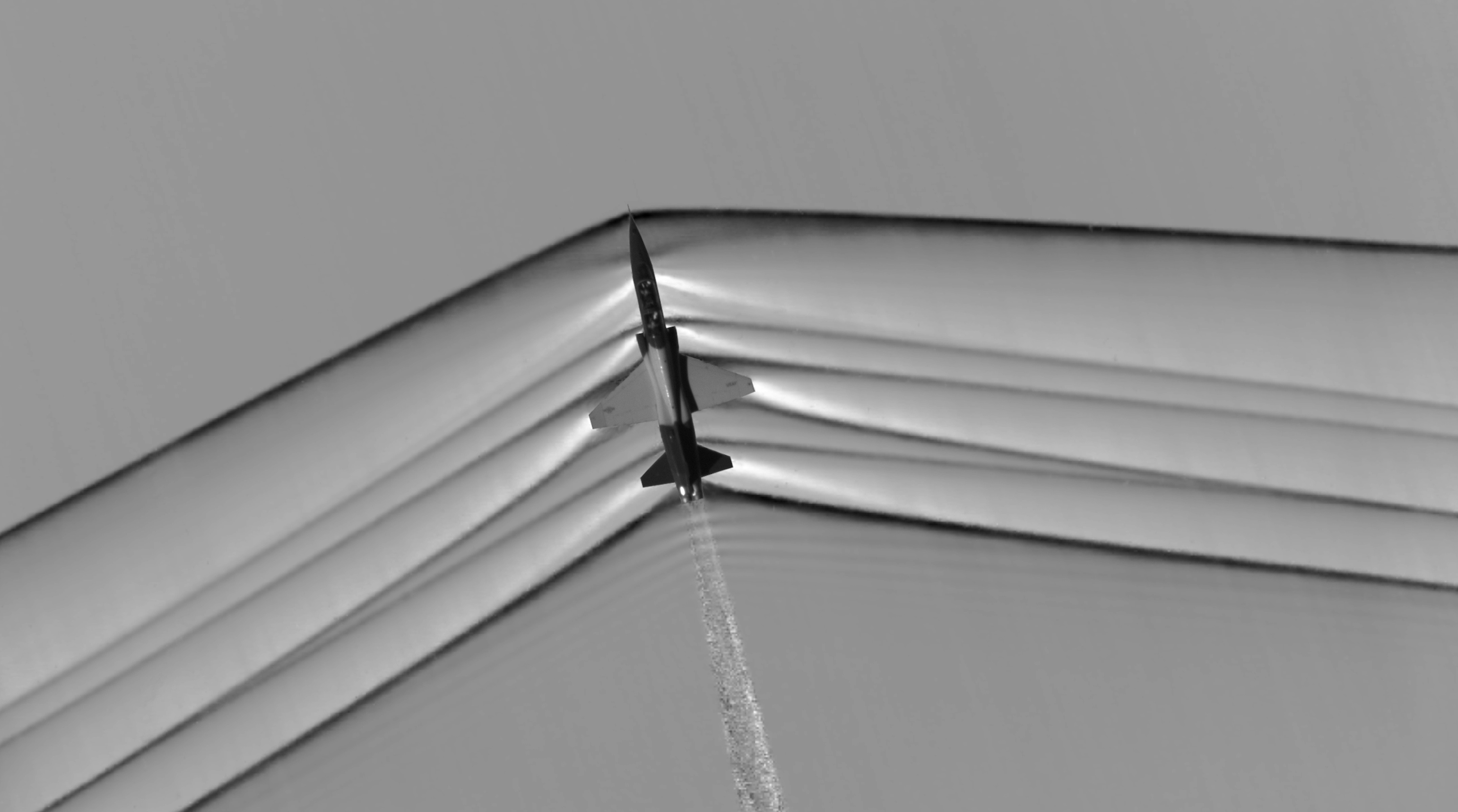 These oblique shocks reduce the speed of the air that the wing experiences. If the plane is at a low enough Mach number, the shocks will reduce the speed of the air to below Mach 1. For example, I calculate (with the Taylor-Maccoll equations, I could be wrong) that a Mach 1.5 plane with a nose cone total angle of 25° will produce Mach 0.7 flow following that shock wave.

Assuming the shocks off the body don't significantly alter the Mach number, the wings will experience this lower Mach number if their span isn't too large. The wings are then experiencing a Mach number lower than most commercial jets.

Why, then, do almost all supersonic planes use either a highly swept leading edge (most jet fighters) or a sharp leading edge (like the F-104)?

Normally, the flow speed at the wing is about the same as the speed ahead of the bow shock. Only if the fuselage is still conical and expanding at the wing station would the local flow speed be smaller. In order to be subsonic, you would need an absurdly blunt fuselage at Mach 1.5. But the wing is in a way still subsonic if its leading edge sweep is sufficient.

If you look closely enough, every shock has a subsonic region, but it is normally very small. The size of the subsonic region depends on the flow speed and the bluntness of the body causing the shock. See the diagram below for the parts of a classical oblique shock. 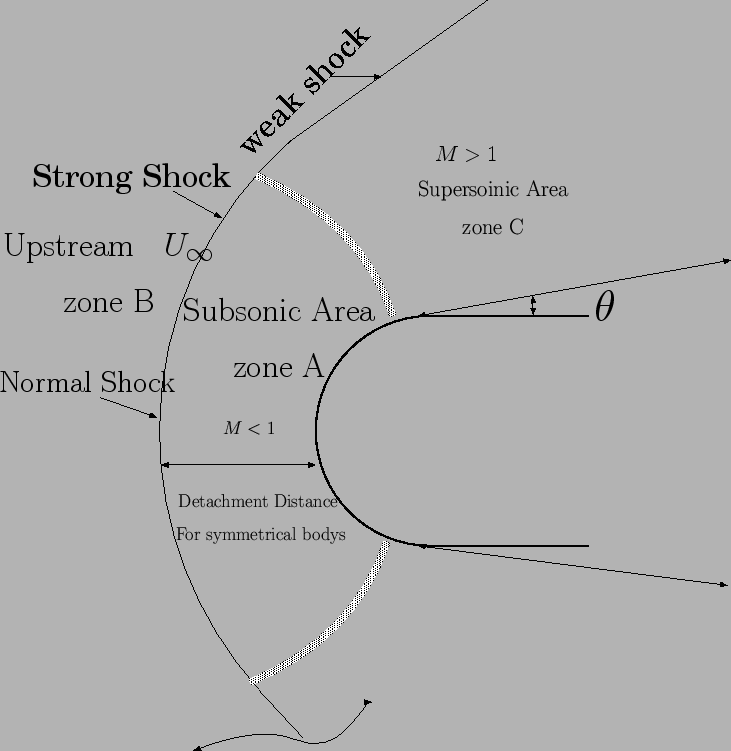 Diagram of an oblique shock and its three areas (picture source)

Supersonic aircraft are pointed at the front end in order to minimize the region of the strong shock, resulting effectively in an attached shock. The steeper the shock angle for a given flow speed, the higher the losses are. Only in hypersonic vehicles are blunt noses used on purpose, but nor for braking but for limiting local heat loads.

Why does the subsonic region disappear so soon? Because the cross section of the body stops to grow in flow direction, and the pressure energy past the strong shock is converted into speed again in expansion waves.

This means that the wings still fly in supersonic flow. If the fuselage has a constant cross section along the wing's chord, the flow speed is even the same as the speed ahead of the shock. Otherwise, the tail shock would have a smaller cone angle, which it does not have; the flow accelerates again in expansion waves when the conical nose changes to the regular fuselage, and again when the fuselage contracts at its end.

Now it makes sense to sweep the wing such that it will fit inside the Mach cone resulting from the inboard wing section. This results in a subsonic orthogonal speed component at the leading edge. The important insight here is that the spanwise speed component of the flow is not affected by the wing, and only the orthogonal component counts. If that component is subsonic, the whole wing behaves like a straight wing in subsonic flow. Note that all supersonic aircraft with a subsonic leading edge use blunt-nosed airfoils, because those create a suction force (PDF!) which reduces drag.

At higher speed sweep needs to be so steep that the problems of swept wings cannot be tolerated any more. Then and only then it makes sense to have a supersonic leading edge which has less sweep than the Mach cone and needs to be sharp in order to minimize drag. Another way to combine high sweep and good subsonic characteristics is to use variable sweep. This was the preferred solution until it was realised that high supersonic speed is rarely used in combat.

Though the oblique shocks reduce the downstream mach number, the flow will still be supersonic usually; for the flow to be subsonic, the shock has to be either normal or detached (bow shock).

For every body angle (i.e. corner angle)-mach number combination, there is a maximum corner angle $\theta_{max}$, beyond which the shock will be detached from the body. 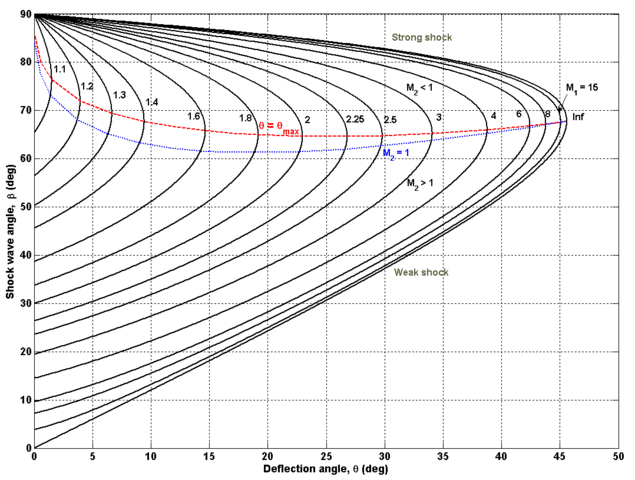 From NACA Report 1135: Equations, tables and Charts for Compressible Flow:

... two solutions exist for each cone and Mach number, but it is believed that only the weaker shock wave can occur on an isolated convex body.

So, the wings have to be designed for supersonic regime in case the nose produces oblique shock waves (detached shock waves are no good- they increase drag tremendously and that is the main reason they are used in re-entry vehicles). Even if the flow is not supersonic, you're still in transonic regime, where you need design the wings keeping the critical Mach number in mind.

Though the 3D flow over a cone is similar to the flow over the wedge (in that it has strong-weak cases and separation above a certain limit), the maximum angle $\theta_{max}$ is higher in case of 3D flow. Again, the attached shock is the 'weak' one.

Not the answer you're looking for? Browse other questions tagged aircraft-design wing supersonic shock-waves or ask your own question.

111
Why is the maximum speed of current fighter aircraft lower than those from the 1960's and 1970's?
48
Why/when is the blunt nose better?
18
Why do some military aircraft use variable-sweep wings?
15
What is the reason for the poor low-speed characteristics of sweptback wings?
14
Why is the coefficient of drag for straight wings at supersonic speeds lower than for swept wings?
5
Does skin friction drag decrease with velocity?
1
What is the pressure distribution around a supersonic wing?
1
What would happen if the wing of a supersonic plane goes into the shock wave from the nose?
1
How does wing shape impact shock structure?

5
Can a flow which is initially supersonic, become subsonic without a shock wave?
1
What would happen if the wing of a supersonic plane goes into the shock wave from the nose?
6
What would the density profile of this shock wave look like, roughly?
1
What is primary cause of shock induced separation (shock stall)?
15
Acceleration of a supersonic aircraft after breaking the sound barrier
2
Why does the use of reverse thrust in flight on the DC-8 cause areas of separated/reversed airflow over the wing?
3
Why do swept wings decrease the drag increase that occurs in transonic flows?
2
How do coefficient of lift/drag variation with speed differs between swept and unswept wings?