Could a tilt quadcopter use turbofan engines?

I was wondering whether having a quad tiltrotor would allow for the use of turbofan engine rather than turbo prop. I read on another question that the V-22 uses turbo prop as it is easier to balance, but if there were 4 turbofans then it could surely balance and with the engines closer. Could a turbofan tilt rotor be possible for supersonic speeds and VTOL? And would tilt rotor or tilt wing be better in this application? Also wouldn't turbo fan mean there isn't the stream to worry about between sets of motors?

In a way, this has been done already half a century ago.

When NATO decided to try a VTOL strategy, the Harrier was not the only result. There was even a supersonic VTOL fighter, and it used swivelling engine pods at its wingtips, much like the V-22 does today. It was the VJ-101C, developed in Germany and first flown in 1963. 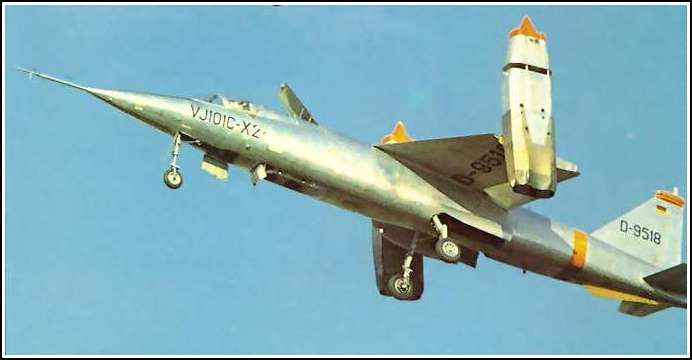 VJ-101C in flight. Note the opened intake door aft of the cockpit where two additional lift engines were complementing the thrust from the wingtip engines (picture source)

While the VJ-101C used six Rolls-Royce RB145 turbojets, a later production version was planned to use turbofan engines. NATO changed it's mind before the turbofan-powered version was built, however.

The main reason V-22 uses propellers is efficiency. To get high thrust for power, you need to affect a lot of air and that requires a large propeller. The V-22 has huge propellers, closer to helicopter rotors than typical aircraft propellers. This gives it the static thrust-to-weight ratio of more than 2, so even with one engine out it still has more than 1 and can keep hovering.

At higher speeds, propellers loose their advantage as they don't work well at high speeds, so for transsonic turbofans become better and as the speed increases further, you need to reduce the bypass ratio. But since jets have relatively low static thrust, a jet VTOL needs a really powerful engine.

Now, they can be made. F-35B is a supersonic VTOL and does it with just 1 engine. The engine needs to be really huge for the aircraft (which is the case for all fighters, but not other aircraft classes), but it still gives a static thrust-to-weight ratio of around 1 (F-35B can't do pure vertical take-off at MTOW). There is no way to install two such engines on the plane to get hover ability with one engine inoperative. And the fuel consumption is huge, which is acceptable for fighter, but would not be for transport aircraft.

Last, 4 engines would be actually much harder to balance than 1 that splits the air over multiple jets. This is because jet engines have significant lag in thrust command response and can't be controlled all that precisely. On quadcopters the electric motors respond immediately to control input and in large propeller/rotor aircraft the propeller/blade pitch is used which also gives immediate response, but jet engines need to match their rotational speed to power and that takes too much time. It is easier to split the flow from one engine using variable guide vanes.

Not the answer you're looking for? Browse other questions tagged aircraft-design supersonic quadcopter tiltrotor or ask your own question.

10
Does a quadcopter have flight modes beyond traditional aircraft?
16
How to calculate the required motor power and rotor size with respect to the weight of quadcopter?
7
How do VTOL aircraft like the V-22 Osprey not tilt?
3
What is the difference between Tilt-rotor aircraft and Tilt-wing aircraft?
3
Could a quadcopter fly if its propellers were encased in cylindrical tubes?