Is it possible to fly a Straight and Level flight at high speed?

The question arise while discussing with some of my student pilot friends that as we have been performing Slow Flight we have to keep increasing the AOA of the aircraft to compensate for every lose in airspeed. What about "FAST Flight", decreasing the AOA of an aircraft for every gain in airspeed. Maybe Negative AOA. I'm aware that lift could be generated with negative AOA from the graph of AOA vs CL. And if you could explain to me why there is a specified cruise setting?

Yes, with good engines and low drag you can fly straight and level at really high speeds.

What about the AOA? It gets smaller, but only down to a certain limit. At level flight, the weight of the aircraft is equal to the aerodynamic lift:

The lift coefficient depends on the AOA ($\alpha$):

For very high speeds the first term of the parenthesis will get close to zero, so that the desired AOA setting becomes

This AOA is indeed negative for most aircraft. If your AOA gets smaller you won't be able to sustain level flight.

The plot below shows the AOA needed for straight and level flight on a Cessna 172 and compares the two terms in the parenthesis of the equation for $\alpha$ (multiplied by 10 for better readability). You would need to fly much faster than $V_{NE}$ to get the first term significantly smaller than the second one.

Source: own work with data from Wikipedia and polar.

In order to fly at top speed with the fuselage level you need to pick the right altitude.

Consider the picture below: It shows a Northrop B-2 (foreground), a Rockwell B-1 (midlevel) and a Boeing B-52 (background) flying in formation at moderate altitude. The fuselage attitude is considerably different between all of them. 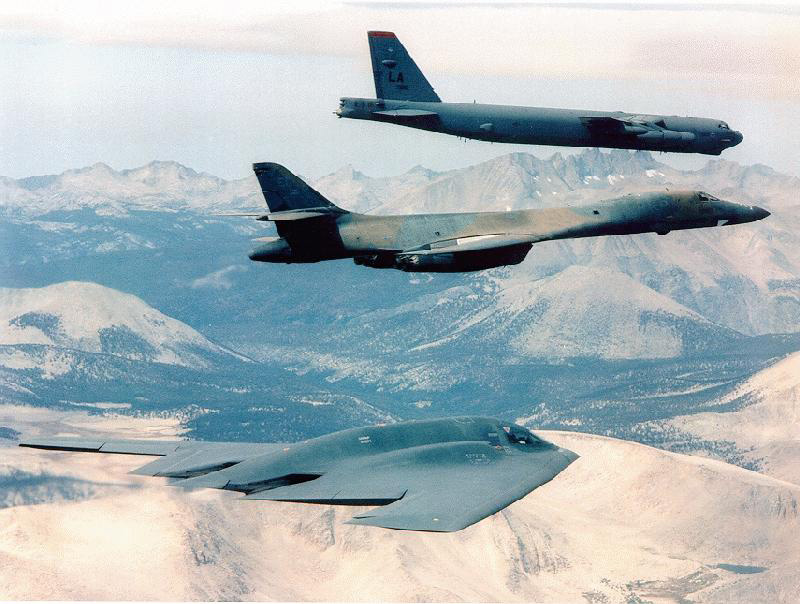 Why the difference in fuselage attitude?

Each of the three will fly with the fuselage about level in its design point. This can be generalized for any airplane: All what is needed to fly fast with a level attitude is to adjust the flight level to something close to the design point.

Not the answer you're looking for? Browse other questions tagged aerodynamics airspeed angle-of-attack or ask your own question.

20
What is the reference used when measuring flight speed?
6
Is it possible to fly horizontally with zero angle of attack?
0
Is there a speed needed to achieve flight?
13
Why do aircraft have a crossover airspeed, and why does it increase at higher vertical load factors?
7
What is the regular stall speed of an F-16 flying in a straight-and-level path?
1
Is a high alpha sideslip possible and safe?
1
Is it possible to determine if winds were high without groundspeed, wind speed, AoA or AoS?
4
What exactly happens when power is reduced in trimmed, straight and level flight?
7
Could airliners fetch data like AoA and speed from an INS?
7
What should the Attitude Indicator be reading when in straight and level flight?