How does supercruise thrust compare with static thrust ASL?

As I understand it, turbojet thrust decreases both with altitude due to rarefied air reducing massflow, and airspeed due to a smaller speed increase between intake and exhaust relative to the airframe. However aircraft designed for sustained supercruise such as Concorde or Blackbird had intakes that used various amounts of ram-effect pressure recovery, so I was wondering how much that would offset the effects of being fast and high i.e. what was Concorde's mach 2 max thrust compared compared to sea level dry thrust, and/or the Blackbird's mach 3.2 turboramjet thrust compared to take-off wet thrust?

According to the wiki page of the Rolls Royce/Snecma Olympus for the Concorde:

During cruise at Mach 2.02 each Olympus 593 was producing around 10,000 lbf of thrust... Eames (SAE Transactions 1991) however mentions the cruise thrust of each engine to be 6790 lbf.... The 10,000 lbf is perhaps the maximum thrust available at cruising speed (used during acceleration and climb just before transitioning to cruise).

As I understand it, turbojet thrust decreases both with altitude due to rarefied air reducing massflow, and airspeed due to a smaller speed increase between intake and exhaust relative to the airframe.

Yes indeed - however, available thrust increases with airspeed, that is why ramjets work. And drag reduces with altitude, so the required thrust decreases. 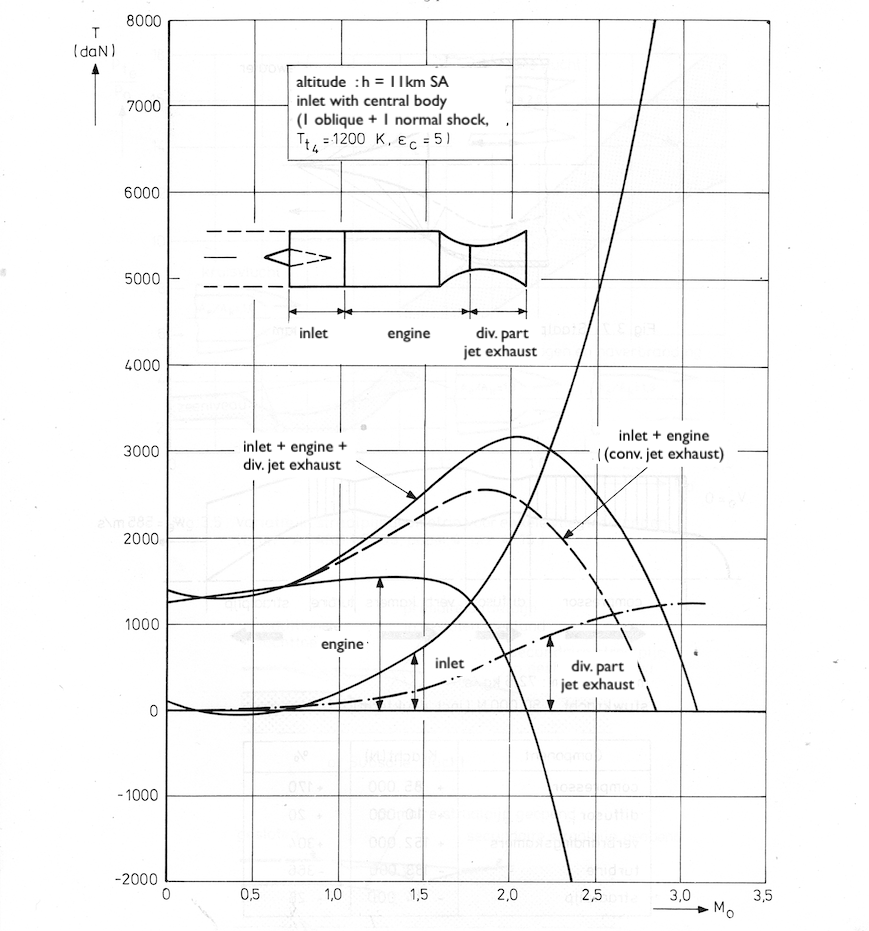 The contributions to thrust of the parts of a turbojet installation for supersonic propulsion have been computed and presented in prof. Wittenberg's TUDelft D-32B lecture handout, Fig 3.9 (above). It can be seen that the contribution of the inlet rises exponentially with Mach number M, while that of the engine itself reduces above M = 1.5. Above M = 2 the aeroplane drags the engine along! Reason why the turbine was completely bypassed at the M=3 for the SR-71.

In the same lecture handout, the pic above shows the subdivision over the installation parts of thrust, from "Power for supersonic flight", Journal of the Royal Aeronautical Society, July 1964.

For the SR-71, takeoff thrust:weight is 0.44:1. Using the Kuchemann supersonic L/D formula, we get

The figures for the SR-71 may well be wrong.

Not the answer you're looking for? Browse other questions tagged jet-engine aircraft-performance airspeed supersonic or ask your own question.

24
In what way are the Concorde's engines considered efficient?

20
How is supercruise achieved?
5
How can a modified ramjet produce static thrust without a turbine?
12
How (and why) does engine thrust change with airspeed?
5
How does maximum speed vary with altitude?
24
How does gas turbine efficiency compare with supercharged piston engines?
2
What are the equation linking static air temperature with true airspeed & altitude?
1
How do power and thrust curves compare?
1
How does afterburner efficiency vary with thrust?
10
What exactly is the pressure thrust component and why does it exist?