What is the temperature of the air leaving the combustion chamber of a CFM56-5C?

What is the temperature of the air leaving the combustion chamber of a CFM56-5C? I was wondering as I could only find out that the fuel burns at around 1500 Celsius but this can't be the same as the air temperature because the air/fuel ratio isn't 1:1.

Quick answer: At the design point considered, which is assumed to be takeoff conditions, a CFM56-5C combustor raises gas temperature to 1360°C (the share of the compressor in this raise is about 600 °C).

This is a common value found in modern turbine engines, a balance between fuel consumption reduction and turbine material capabilities (nickel super-alloy, more on that here and here).

Turbine entry temperature (TET) varies with thrust. Takeoff TET is maximal and top-of-climb TET is about 100°C less. Takeoff TET cannot be allowed for a long time, due to the damages which would be incurred by the high-pressure turbine guide vanes and blades.

In turbine engineering, to facilitate description and comparison, steps in the Brayton cycle are identified by a station number.

Additional stations are defined to reflect specific needs (e.g. for the cold flow of a turbofan). The full standard is known as ARP 755, see this old but free description.

The exit of the combustor (which is also the turbine nozzle guide vane leading edge) is station 4. In this nomenclature, Tn is the temperature at station n, Pn the pressure, etc. As an example, the sensor seen in the fan inlet of many turbofan engines is commonly referred as T12 or P12T12 sensor.

Thrust which can be produced by the engine depends on the turbine inlet temperature (station 4), which is limited by materials.

There are two means of raising the temperature. The compressor raises the temperature by increasing air pressure, the combustor raises it by fuel combustion at (ideally) constant pressure. The later increases entropy due to the breaking of hydrocarbon chains.

This is visible on a so called temperature-entropy (T-s) diagram, e.g. this one for the CFM56-7B: 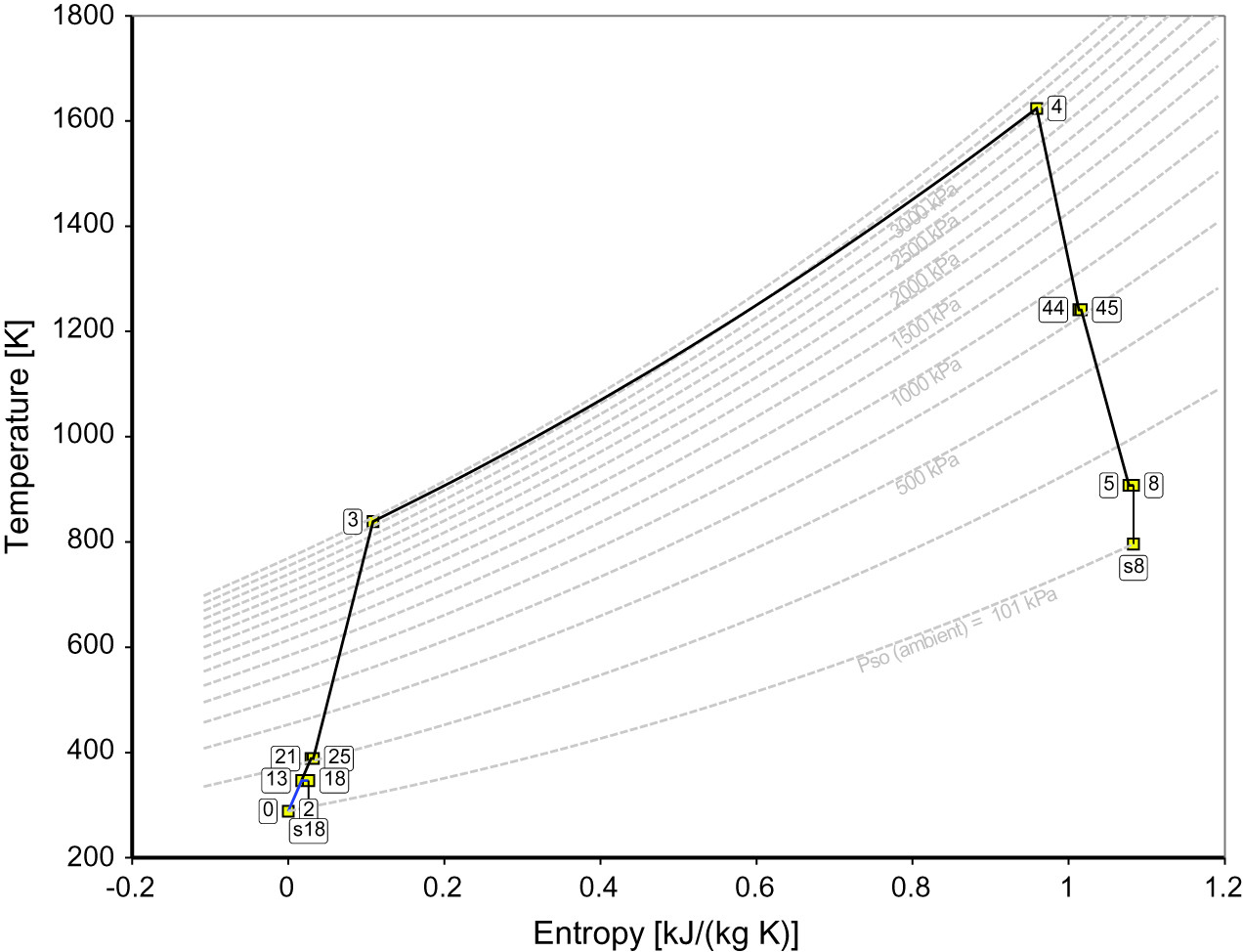 We can see the compressor work between stations 0 and 3 (with no change in entropy in a perfect cycle) and the (ideally) isobaric raise in temperature and entropy between 3 and 4 as fuel chemical potential energy heats air.

The area under the curve is representative, along with the mass flow, of the net work of the engine (energy produced by the turbine minus energy consumed by the compressor), hence its efficiency. The area depends on two main factors:

The goal is to achieve the desired turbine temperature with the highest efficiency. By increasing the pressure ratio of the compressor (the height of the left vertical segment) less entropy has to be added by the combustor (horizontal segment). This means less fuel.

There is a specific PR value, around 30-35, for which the area under the T-s curve is maximal. This value is indeed targeted by the engine designer. Looking at the previous diagram (oblique lines in kPa), we can see the PR used is around 30.

Four CFM56-5C were used to power the smallest A340. A340 manufacturing has been stopped, as 4 engines are no more a good option in the era of high fuel prices.

Your question indeed boils down to: What is T4 for the CFM56-5C?

From this document (in French):

which is a thesis by Elodie Roux, this table on page 198:

Not the answer you're looking for? Browse other questions tagged jet-engine temperature combustion or ask your own question.

31
What material is used to make the hot sections of jet engines?
17
Why are turbine blades not made out of titanium, only compressor blades?

21
How are temperature differences handled in a jet engine?
3
What does prevent air and fuel to be mixed upstream of the compressor?
3
How can you explicate the efficiency of a turbofan engine with Carnot's theorem?
1
Why is the relation of height and temperature different when calculating altitude?
4
How would exhaust heat recovery into the combustion chamber affect the efficiency of a jet engine?
1
What is the fuel/air ratio of the CFM56-5A1 engine (in the A320 model)?
0
Why is it that low fuel gauge is one indication of a compressor stall?
3
How do jet engines cool the gas in the combustion zone?