Why is the Priority Takeover button used?

On the sidesticks of Airbus aircraft, there is a Priority Takeover button. Wikipedia has this to say:

In typical Airbus side-stick implementations, the sticks are independent. The plane's computer either aggregates multiple inputs or a pilot can press a "priority button" to lock out inputs from the other side-stick.

On US flight 1549, the CVR transcript shows that Sully hit the Priority T/O button, after the co-pilot (Skiles) handed over control of the aircraft:

I'm curious as to why there's a need for this button at all?

As mentioned in other answers, the priority button when pressed gives side stick control to the pilot who presses it the last. If you keep holding the button and pass 40 seconds, the other side stick deactivates. It can only be activated by pressing the priority button of the other stick. The main problem with the side stick control of Airbus aircraft is not that it is mechanically not linked. The problem is how the aircraft behaves when two inputs are given at the same time. In Airbus fly by wire, the side stick inputs are algebraically added. This means, if two pilots give an opposite and an equal demand, the aircraft may not even react to the controls. Or worse, if the two pilots were to give an identical input (in the same direction) the aircraft may overreact to the controls. Below is a picture which shows this behavior. As you can see, the left pilot gives a 20% left side stick demand, while the right pilot gives a 30% left demand. The aircraft adds up the inputs and the net input becomes a 50% left roll demand. 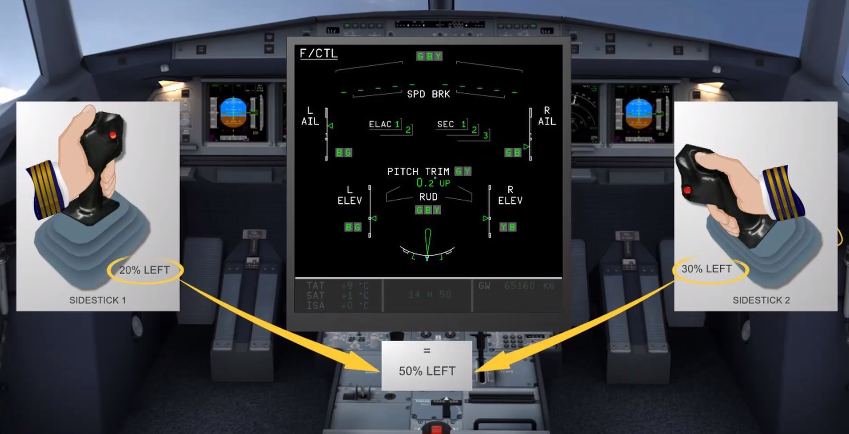 What are the risks associated with dual inputs? The main risk is that the aircraft might behave inappropriately to what the pilots want. For example, in the flare to the landing, if two pilots put in inputs to the side stick, the aircraft may under flare (opposite inputs) and the result can be a hard landing. Or if the inputs are given in the same direction (nose up), the resulting over flare may cause a tail strike. This is where the priority button becomes extremely crucial. If you for instance see the other pilot not flaring during the landing, you say I have controls, press the priority button and do the flare yourself. This ensures the other pilot can no longer control the aircraft. This is particularly important in training flights with a new pilot who for example fails to flare at the right time. Many a times new pilots tend to be nervous (natural human behavior) and even when the instructor says he has controls (after seeing what is happening), because of nervousness the trainee can unknowingly manipulate the controls. This can develop into a very dangerous situation where neither of the pilots know who has the controls. The priority button really helps in these type of dynamic situations. To ensure that the pilots are aware that there is a dual input, if the inputs meet a certain threshold, a 'dual input' aural alert comes on.

In case of Capt. Sully, we cannot be entirely sure why he pressed the priority button after saying he has controls. It might be because they were in a dire situation (dual engine flame out) and he did not want his first officer to unknowingly add any inputs to his inputs. Usually, in normal flights as said above changing over controls do not require the use of priority button.

It's been several years since I worked at United's flight training center, but if my memory serves me, it is there in case the system is receiving input that the pilot wants to exclude. As was explained to me, an example of this would be the other pilot becoming incapacitated, with their body leaning against the sidestick. In this case, one would want to use the Priority Takeover button to eliminate the other pilot's input.

In Captain Sullenberger's case, it is likely that he wanted to ensure that First Officer Skiles wasn't providing any control inputs that would work against his control inputs.

Now, it is also my understanding that such functionality is not useful in a "hostile takeover" event, since the other pilot can also attempt a priority takeover (or use physical force, due to the close proximity of the two pilots).

I'm not sure it exactly answers your question, but there is an excellent example of why this feature ought to always be used in an emergency situation.

Air France Flight 447 was an Airbus A330, I'm not entirely certain if it had this feature (I assume so?) Anyway, it went into a stall somewhere near cruise altitude and the co-pilot, for some unknown reason, kept pulling back on the right stick. Eventually the plane was at a 40 degree incline and losing altitude quickly. The pilot on the left stick noticed the the stall and tried to push the plane forward to correct, but found the controls to be unresponsive, he was apparently unaware that the right stick was pulled fully back. The plane stayed in that stall all the way until it crashed into the Atlantic Ocean.

In an emergency, it's really really important to have a single input or a "single source of truth", not matter what industry you're in (I hear it all the time in software development anyway.) I'd argue that this is the main reason they have that override switch.

A prime reason for this is the fact that the Airbus sidesticks are not connected mechanically, unlike the center control columns of other aircraft. In the event of conflicting inputs from both pilots, such a condition would not be readily apparent. With mechanically connected columns, conflicting input is not possible, without both pilots being aware that the other was trying to do something different.

As Jay Carr mentioned, this was one of the reasons that led to the AF447 crash - conflicting stick inputs, and apparently neither pilot was aware of that situation, as they would have been with mechanically connected columns. That was an avoidable accident, on several levels.

It's surprising that Airbus came up with dual disconnected sidesticks and didn't consider the possibility of conflicting inputs, certainly didn't do a very good job of alerting the pilots that such a condition existed. In retrospect, the computer should be screaming bloody murder at the pilots if it detects both sidesticks in use simultaneously - a situation that should never happen.

As far as I recall the priority button suppresses the other stick and autopilot. Since it is right under the thumb on the side-stick, that makes it quicker way to disconnect autopilot than navigating the other hand to the flight management panel.

The overall idea is that when the pilot needs to make manual input quickly they simply push that button and it will ensure that input will be obeyed, so they don't need to think what state the system was in.

Not the answer you're looking for? Browse other questions tagged airbus sidestick fwc us1549-accident or ask your own question.

17
Why do airline pilots have shoulder harnesses?
23
What happens when two different control inputs are commanded in an aircraft with two control columns?
12
Under what circumstances should the pilot not flying intervene without asking for aircraft control?
8
What has Airbus done to address the dual input issue?
5
Who has the final authority over sidesticks?

8
Why is there so much movement of the sidestick during this takeoff?
25
Why do Airbus sidesticks add their inputs?
4
What kind of heaters are used for heated floor panels?
8
What distinguishes the Airbus-Sidestick from an ordinary gaming joystick?
8
What is the APU actually used for?
5
Who has the final authority over sidesticks?
2
What are the mechanical deflection angles for Airbus side-stick controllers?
1
Under what conditions does the FWC give the PITCH PITCH aural call-out on the A320?
20
Why did the US Airways Flight 1549 passengers stay on the wings?
9
Do pilots use the pedals in flight on planes with a sidestick (Airbus)?