How do pilots adjust trim on the B777, where the control forces are simulated?

I know that pilots of small airplanes (e.g. Cessna 172) use force to trim, i.e. they hold the required attitude using the yoke, then trim the aircraft until no force is required to hold the yoke in that position. In that way, they trim using 'feel' to gauge how much trim is needed.

Airliners and some other planes use trimmable stabilizers for trimming, thus the yoke always returns to center if the pilot leaves it.

So I was reading the B777 FCOM and it's written in there that since the plane is fly-by-wire, it simulates control column forces to let the pilot know it is out of trim.

My question is how does the pilot know how much trim to use? I know one way would be to let go off the yoke and see if the plane keeps its attitude or not, but is there another way?

(sorry for the long question, I am a newbie here and did my best to ensure you understand my question).

The basic idea, as the FCOM says, is to simulate control column forces (as in 'conventional' aircraft) so that the pilot knows that he/she is out of trim. So, once the aircraft has been trimmed, there is no force on the control column- the pilot stops trimming at that point.

Boeing 777 uses a feedback actuator to give an artificial feel to the pilot emulating conventional aircraft- this is no accident, as Boeing B-777: Fly-By-Wire Flight Controls notes:

The philosophy employed during the design of the 777 Primary Flight Control System maintains a system operation that is consistent with a pilot’s past training and experience. What is meant by this is that however different the actual system architecture is from previous Boeing airplanes, the presentation to the pilot is that of a conventionally controlled mechanical system.

The control columns (yokes) have feel units, which provides tactile feedback to the pilots just like conventional aircraft:

A gradient control actuator is attached to the two control column feel units. These units provide the tactile feel of the control column ... (This) is consistent with a pilot’s experience in conventional commercial jet transports.

The image below shows the Boeing 777 yoke with the trim switches. 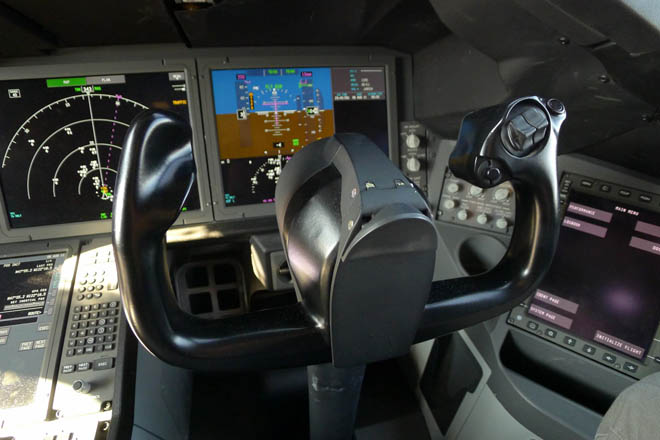 ... The buttons on the right side of the yoke control the trim surfaces for the elevator.; image from wired.com

This trimming system works just like the conventional aircraft- as you noted "they hold the required attitude using the yoke, then trim the aircraft until no force is required to hold the yoke in that position". Note that, though what happens internally is different from the conventional aircraft, what is presented to the pilot is same. From An Analysis of the Boeing 777 Fly-By-Wire System:

B777 you only use trim for speed changes, configuration changes are auto-trimmed.

You actually only have to hit the trim switches once and the system will auto-trim to the new speed.

Only in PFC (Primary Flight Computer) degraded or failed modes you have a conventional trim method.

When you say it simulates control column forces to let the pilot know it is out of trim. - the forces on the flight control are actual forces, they are just exerted on the flight controls by actuators instead of a conglomeration of springs, dampers, aeroforces, oil pressure, cables, online autopilot actuators etcetera. A computer computes what the feedback force should be, based on the position of the column/wheel/pedal. Any feel characteristic can be programmed in. 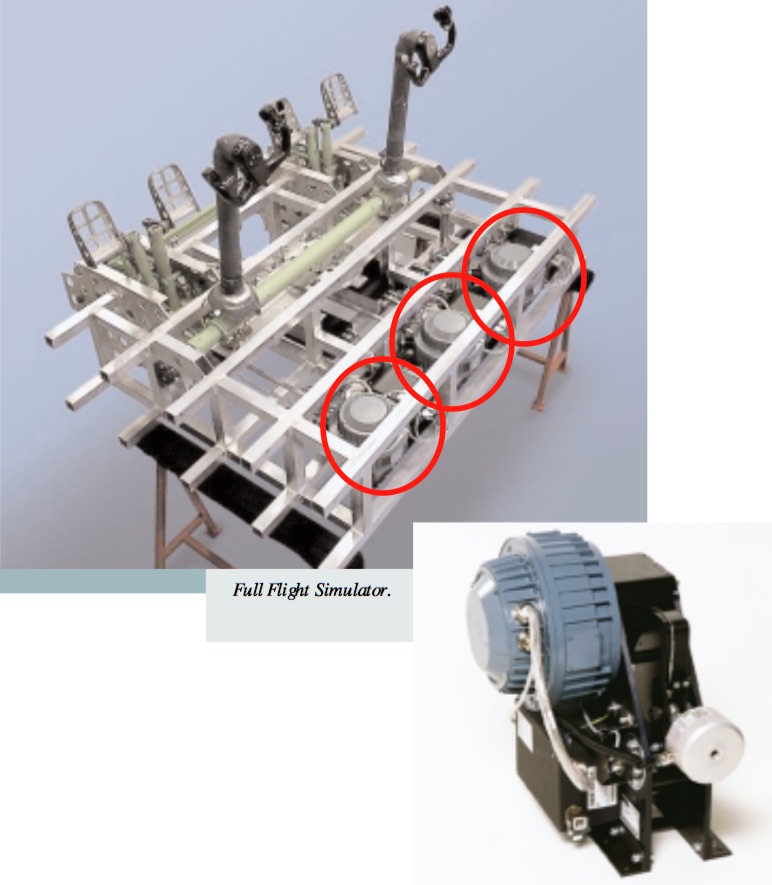 What's on board the B777 is the airborne version of what is on board Full Flight Simulators. The picture shows a sub-frame for a B737, to be built into the flight sim. Its from an old sales brochure and shows pretty sizeable electric actuators, present day ones are a lot smaller. This system was used for B737, but also for F-5, UH-60, MH-53, CN-235 etc etc.

Boeing has programmed force feel characteristics in the B777 that are pretty similar to the ones experienced by the pilots of their previous types. Since it is now all done by programming, they can add clever features such as auto-trim when the button is flicked, but on the whole the trim would still work as in all irreversible flying control systems: a mechanical spring provides forces, the trim button adjusts the neutral position of the mechanical spring so that when the aircraft is level, the control forces are zero.

The B777 is fly by wire like the A330 is, there are computers and actuators involved in deflecting the elevators, ailerons etc based on the control sitch positions, just like in the A330. But unlike the A330, the B777 has active force feedback on the flying controls, also involving a set of actuators. Note that electric actuators are fail-passive: if all power is removed, the stick can move freely and the position can still be used for fly-by-wire aircraft control, it would just feel very light.

Not the answer you're looking for? Browse other questions tagged boeing-777 control-surfaces trim fly-by-wire or ask your own question.

10
Why couldn't Air Moorea Flight 1121 use pitch trim to land safely?
24
Do Airbus pilots have to practice flying in alternate law?
10
Why are airliners not inherently “speed stable”?
13
Why do aircraft have a crossover airspeed, and why does it increase at higher vertical load factors?
6
Why does the 737 auto-land trim up at around 400 feet RA?
1
How much force is produced by control surfaces?
3
How do A320 pilots trim?
0
How do fighter jets stop pitching motion after a elevator deflection?
5
Why doesn’t the A320 have any provision for manual aileron trim?