Under what circumstances do planes poop? [duplicate]

Ask Question
Asked 4 years ago
Active 4 years ago
Viewed 600 times
-5
$\begingroup$
This question already has answers here:
Where does my pee go when I flush at 35,000 ft? (3 answers)
Closed 4 years ago.

I had always assumed that human waste was removed from commercial aircraft while they were on the ground, some inscrutable machine coming by to suck the material out and carry it away.

Although that may happen, it appears that planes do have the ability to poop and they use that ability as one woman found out yesterday after a plane pooped on her house.

Under what circumstances do planes eject blue ice while airborne rather than dispose of it when on the ground?

Note that the alleged duplicate question does not answer the question correctly so I have posted a correct answer here below.

After some research I discovered that "blue ice" jetsam from commercial planes are not uncommon and in several instances people have even been struck by poo bombs, although apparently noone has been killed yet.

Normally, the septic tank on a plane is evacuated on the ground by a special truck after the plane has landed. However, the septic tanks have an overflow valve. If, for any reason, the septic tank becomes full and pressurized, then it will start to overflow outside of the plane through the waste drain valve assembly (shown in diagram below). This overflow can accumulate into a ball of ice due to the freezing cold temperatures at high altitudes. The ice then falls off either when it gets too big or when the temperatures warm it as the plane nears the ground. 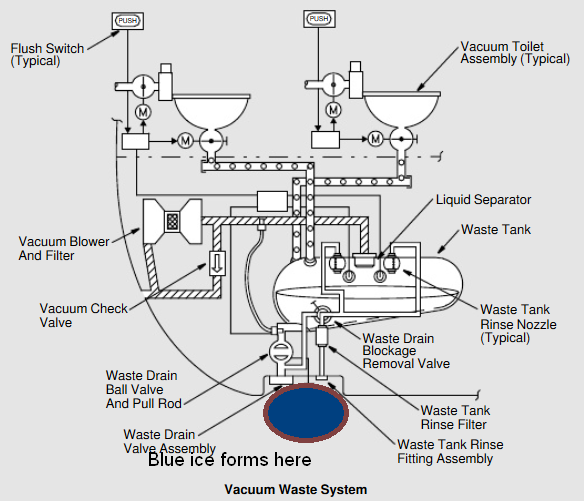 Not the answer you're looking for? Browse other questions tagged commercial-operations or ask your own question.

12
What was the commercial speed of Concorde?
3
What is the relation between pressure and airflow speed above an airfoil?
9
Does operation under ETOPS rules require additional procedures in flight during the ETOPS segment?
3
What is the difference between Part 121, Part 135, and Part 91 operators?
1
What do the abbreviations on this Jeppesen Dataplan mean?
4
What is the requirement to become a flight attendant?
2
What is the shortest regularly scheduled commercial flight?
3
Can an aircraft operator hire a Commercial Pilot to fly their aircraft under part 91?