How can I find the CG of a model aircraft based on its dimensions? [closed]

Given the dimensions and gross weight of an RC model aircraft, how can I find the center of gravity? Can I calculate it, or perhaps there's some way to approximate it?

Assuming that by 'dimensions' you mean the values for length, width and height, there is no way to calculate CofG from it. Two planes with exactly the same dimensions, but one with a thicker wings or tail, will have different C of G.

Even if you know the precise shape of the plane, the C of G cannot be calculated. Replacing a wooden tail with a heavier metal one with the same shape would shift the C of G. So would replacing the engine with a heavier one.

You need either the plane itself, or exact plans showing all the components and their weights (and a lot of maths).

The question you have asked is competently answered by DJClayworth.

But I guess you want to ask something different, that is where the center of gravity must be in order to have a well-behaved aircraft. The aerodynamicist's answer would be: Slightly ahead of the neutral point.

First, calculate the areas of both the wing and the horizontal tail. Interpolate between the wing roots to include the section which is covered by the fuselage. These areas are needed for scaling the influence of the wing and the tail.

Use the sketch below for a graphical method: The grey area is the swept wing's planform. First, add one tip chord length at each end of the root chord and vice versa with one root chord length at each end of the tip chord (blue lines). Then connect the ends of the resulting lines (red lines). The spanwise station where they cross is your mean chord (green line). Use the quarter point of this chord (black circle) and carry it over to the root to measure the distance to your reference point. 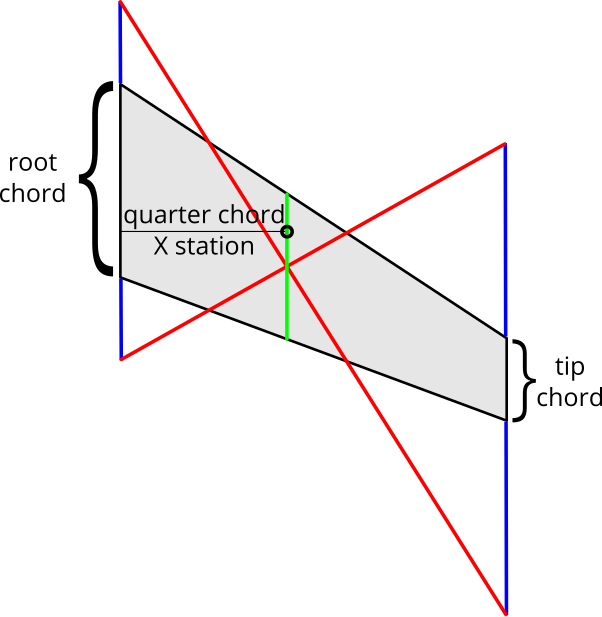 Now that you know the neutral point, place the center of gravity at 20% of the mean chord (remember the green line?) ahead of this point. In a normal RC aircraft with unswept wings this is approximately at one third of the chord length from the nose of the wing root chord.

If the model aircraft can actually fly you can narrow down where the center of mass is.

The center of mass will be along the centerline of the aircraft (usually by virtue of symmetry).

Beyond that the center of mass will most likely be near or just in front of the wing root. That way loss of control will let it remain stable instead.

Not the answer you're looking for? Browse other questions tagged aircraft-design aircraft-performance weight-and-balance or ask your own question.

9
Where can I find detailed dimensions of an aircraft engine compressor blade?
4
How can you find the best altitude for range or speed?
4
How can the range of an aircraft be calculated given real wind conditions?
2
How do I calculate the landing distance in a landing chart with tailwind?
1
How do I calculate this question? mass and balance
6
Can the CG move out of bounds as fuel is used?