Why does the Canadair Regional Jet still use CRT screens?

All the CRJ aircraft from the 100 up through the new 1000 use the antiquated CRT technology for the main primary and secondary displays as well as the ED1 and ED2 displays. 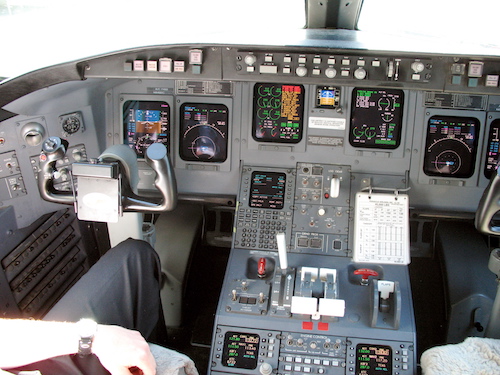 I know the exact answer, even if 2 years late.

Firstly, Collins makes their own displays.

Secondly, it was a conscious decision during CRJ700 development to remain CRT, solely for the reason that airlines already had spares supplies of the CRT displays for the CRJ200 fleet. Changing to LCD in the 700, 900, and 1000 would require two different spares supplies for operators of the entire range.

Additionally, it was a cost matter... the PL4 was already certified, and the airlines :

This is just an educated guess, but it was too much info for comments. Maybe someone can come up with a specific answer, but it seems it's probably a certification delay. The CRJ's all use the Rockwell Collins Pro Line 4 avionics suite, which uses CRT's. In 2000 Rockwell Collins introduced the Pro Line 21 suite which uses LCD screens. They have been slowly introducing PL21 retrofits for aircraft with PL4 as they receive STC's. The Falcon 50 and 2000 began getting retrofits in 2008, followed by Beechjet 400A in 2009, King Airs in 2010, Learjet 60 and Gulfstream G100 in 2012, Piaggio Avanti in 2013, then Hawker 800 and Challenger 300 & 605 in 2014.1

My presumption is that the CRJ's have a type cert with the PL4 and they very well may be working on getting a cert with the PL21 or the newer Pro Line Fusion suite. It will certainly become increasingly difficult to find replacement CRT's as there a only a couple of companies still manufacturing them. It seems just swapping display types is not feasible with the PL4 system. The PL21 system was designed to be more flexible so it's easier to integrate improvements in technology.2

1 These dates might be wrong. I'm finding different dates from different sources. For example, Falcons began getting them in the US in 2006 but it didn't receive EASA certification until 2014.

I have read somewhere that there is only one company that manufactures CRT screens now and CRT screens will have to be replaces at some time in the future because there will be no spares. I think work is in progress to certify them.

17
Why are older airplanes still in use?
17
Why are modern regional jet designs shifting towards under wing engines?
15
Why does this regional jet have its air brakes wide open before touchdown?
3
Which avionics suite does the 757 use?
3
Does the Airbus A320 or Boeing 737 have better resolution screens in the cockpit?
10
What CPU does the F-16 use?
1
What principle does the attitude indicator in the G1000 use?
1
Does the civil industry use the CAN FD bus?
2
Do the rules used in modern soaring competitions forbid gyroscopic flight instruments, or forbid the use of AHRS-driven attitude displays, etc?