What is the stick at the bottom of the tail on a ATR-72?

During my last flight I observed the ATR-72 has a stick protruding from the bottom of the fuselage, near the back of the airplane.

See the bottom of the fuselage in this picture, slightly to the left of the rear door.

I assume it impedes take off and must be removed before flight. 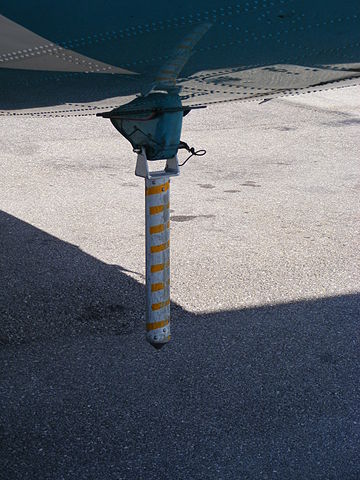 Air Dolomiti ATR 72-212A (I-ADLS) - Removeable tail stand installed at the rear of the aircraft when it is parked on the ground. In case of weight imbalance, this prevents the aircraft from resting on its tail. By User:Mattes - Own work, Public Domain, Link

It is found in other aircraft like Saab-Scania SF340B etc.

You're right that it must be removed before takeoff to prevent potential structural damage. However, there have been instances where aircraft have taken off with them. There have been other issues too:

First of all, there have been previous incidents where the ground crew have just tossed the tail stand into the aft compartment and not replaced it into the storage bracket. As a result, the tail stand has gotten jammed into the control cables for the tail surfaces which run through that compartment. ... . The second reason is that being less visible, the built in tail stand would occasionally be left connected to the aircraft on departure creating the potential for structural damage.

Because of this, external metal stools are used in some cases. Of course, the aircraft can be loaded/unloaded without the tail stand by loading the aircraft in appropriate sequence.

It appears to be a pogo stick (you'll find your picture used in the linked answer) and is a precautionary support for the tail to prevent it from tipping over when loading and unloading.

Not the answer you're looking for? Browse other questions tagged fuselage atr-72 or ask your own question.