Is it normal to take off with limited flaps on a B737?

Is it safe/normal to take off (fully loaded from Cyprus to Kenya - 6 hours) with very small flaps extended? Model of aircraft: Boeing 737-800. He used whole length of the airfield to take off, the next acceleration took a long time at low level, and the next climb happened very slowly. 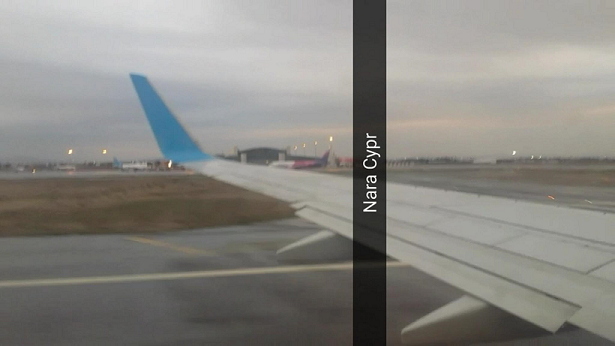 That looks like Flaps 1, and that is not only normal and safe, it is very common on relatively long runways (7500' and longer). For slightly shorter runways, a Flaps 5 takeoff is often used, and for the shortest runways (less than 5500', roughly), even Flaps 15 or on some aircraft, Flaps 25.

All of those are entirely safe options.

As the runway gets shorter, you get the best performance -- defined as how much weight you can carry while still meeting all requirements -- with an earlier liftoff. This means, more flaps to enable rotating at a slower speed. The downside of more flaps is more drag, which reduces initial climb performance. To get the most weight possible, you'd use an extremely long runway, a high takeoff speed, and minimal flaps (i.e. Flaps 1 as you had) for the best performance in the climb. But when the runway isn't so long, you start to be more limited in the weight you can carry, and to get the best results, more & more flaps become optimal as the runway gets shorter.

It sounds like your flight was probably pretty heavy -- a full -800 certainly would qualify -- and so the crew took advantage of the long runway to accelerate to a fast takeoff speed using Flaps 1. In the air, the aircraft will fly fine at that weight, but it isn't as nimble and won't accelerate as quickly as a lighter 737 would. If you're used to the performance of a 737 loaded with the fuel for a one or two hour flight, it isn't surprising that the aircraft with enough fuel for a 6 hour flight (plus reserves, in both cases) would seem sluggish in comparison.

Not the answer you're looking for? Browse other questions tagged takeoff boeing-737 or ask your own question.

16
Why not use flaps in take off from High Density Altitude airport?
6
What happens if you take off with a direct tailwind?
16
Is excess fuel leaking normal during take off of a B737?
8
Could an aircraft like a Boeing 777 take off with flaps fully deployed?
4
Is the A320 family allowed to take off with the flaps retracted?
7
What performance issues/symptoms can a pilot expect while taking off above MTOW?
11
Why did this 737 not take off on first attempt?
8
For the 737 Combi, How did changing the proportions of the passenger vs cargo areas work?
1
Is Assumed Temperature used in conjunction with a Derate in the B737 NG?