At what altitude does aerodynamic forces become negligible?

What is the altitude an airplane can no longer "feel" aerodynamic forces because the atmosphere is so thin?

Generally speaking, as the altitude increases, the density decreases, but there is no fixed altitude above which it disappears- rather it gradually disappears into irrelevance. Even spacecraft hundreds of kilometers above earth's surface in low earth orbits (LEO) have to fire their boosters periodically to overcome atmospheric drag.

The image below shows the height of International Space Station (ISS) over time, which shows the loss of height due to (among other things) atmospheric drag. 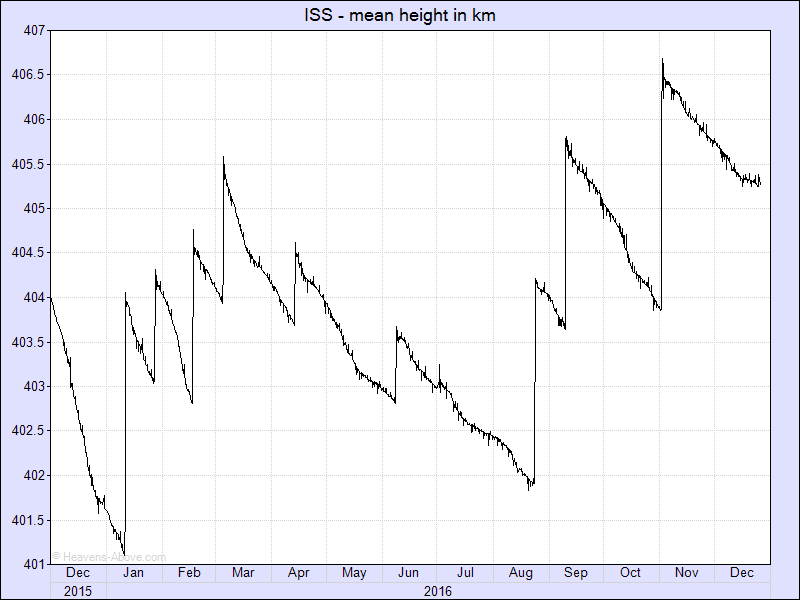 This plot shows the orbital height of the ISS over the last year. Clearly visible are the re-boosts which suddenly increase the height, and the gradual decay in between. The height is averaged over one orbit, and the gradual decrease is caused by atmospheric drag; Image from heavens-above.com

Even at that altitude, the drag can be significant for the fuel available and as NASA points out,

For most of the last decade, ... the International Space Station they were circling the globe at an altitude of approximately 220 statute miles, or about 350 kilometers.

... European Space Agency’s resupply ship Johannes Kepler... will bring the fuel needed to boost the station to its normal planned altitude of 248 miles, or 400 kilometers.

“As solar activity rises, the atmospheric density in our altitude range increases causing increased drag on the vehicle. This in turn causes us to have to raise the orbit more often.”

Even though the space station orbits in what most people on Earth would consider to be the “vacuum of space,” there still are enough atmospheric molecules ... that the cumulative effect of these tiny particles contacting its surfaces reduces its speed and causes a minute but continuous lowering of its altitude, or height above the Earth.

The question now becomes different- at what altitude does effects other than drag become much more important. Though we cant set a precise value as above, it is possible to set a theoretical altitude above which the drag can be neglected (not entirely) and other things become more important. This is called the Kármán line, which Von Kármán explains as:

As the drag force is similar to lift (both are proportional to the square of speed and directly proportional to density), it only makes sense to consider that the drag loses its effect on the air/space craft, at least for ease of definition.

In Aeronautics, level flying higher and higher meant to deal with less and less dense atmosphere, thus to the need of greater and greater speeds to have the flying machine controllable by aerodynamic forces. A speed so big in fact, that, above a certain altitude, could be close or even bigger than the circular orbital speed at that altitude ...

A lot of calculations were made, and finally it was reached the conclusion, accepted by all scientist involved, that around an altitude of 100 Km. the boundary could be set.

The 100-Km altitude, ever since named the “Karman Line”, came thus into existence as the boundary separating Aeronautics and Astronautics.

Basically, for the purposes of your question, we can take the Kármán line as the point where the atmospheric drag loses its effect on the aircraft, which becomes a spacecraft.

It's the altitude an airplane will never reach

An airplane flies because of "drag" (because of induced/reduced air-pressure). If an airplane wants to fly, it needs a certain amount of air (airplane). As long as there is air, there is drag.

Equivalent to a boat: on which altitude has a boat to be to not be dragged by the water: Above the water. But a vehicle above the water is merely a boat anymore...

For a more theoretical answer (neglecting that an airplane by "definition" is not able to reach this altitude), find it yourself with this question: For which r (radius; distance to earth) is 1/r^2 == 0. You may see the problem? The answer is "never".

There are two intermingled questions here: effects of atmospheric drag, and effects of the earth's rotation.

The effect of atmospheric drag decrease with altitude, but they do not have a fixed "start" nor "end" point.

The effects of the earth's rotation on aircraft in flight are too slight to be noticed and are of no practical concerns, as flight itself happens in an earth-centric frame of reference. Theoretical interest, maybe, but no practical use, in my experience.

Not the answer you're looking for? Browse other questions tagged aerodynamics drag altitude or ask your own question.

6
At what altitude does a wing become useless?
68
What determines the maximum altitude a plane can reach?

8
Is the low air pressure on top of the wing the major contributor to lift?
2
How to calculate aileron deflection for achieving similar roll dynamics at thin and dense air?
12
Is A380's center of gravity really too far back?
0
Do aerodynamic forces depend on the materials of the wing surfaces?
2
How to take into account wind in aerodynamic forces balance?
12
Is it possible for a plane to accelerate easily from 30 to 45 mph in flight while it struggles to reach 30 mph (the engine runs at constant power)?
1
How do power and thrust curves compare?
4
Is it likely that an aircraft could have been near 10° 08' north at local midnight August 26/27, 2003?
0
What airspeed is required at sea level to create the same aerodynamic pressure as cruise altitude?