How can we operate wing bending tests?

I understand why we do wing bending tests. Now I want to learn more about the test. How is it performed?

I mean in what conditions, with what equipment and what are we expecting after we perform this test?

First you need a wing that is representative of a flightworthy article.

Next, you need to collect the significant load cases. The most obvious one is that of maximum lift, but sometimes wings have failed even when they were strong enough to support the maximum bending moment. Torsion from aileron deflections and flutter are important, as is the in-plane bending moment from lift at high angle of attack.

Normally, the wing is placed in a rig and computer-controlled hydraulic jacks are used to pull on it, but this can be made much simpler. Below you see the ultimate strength test on the MIT Dedalus wing: Discarded soda bottles were collected, filled with a pre-calculated amount of water and hung from the main spar while the center of the inverted wing was lifted up by a forklift. 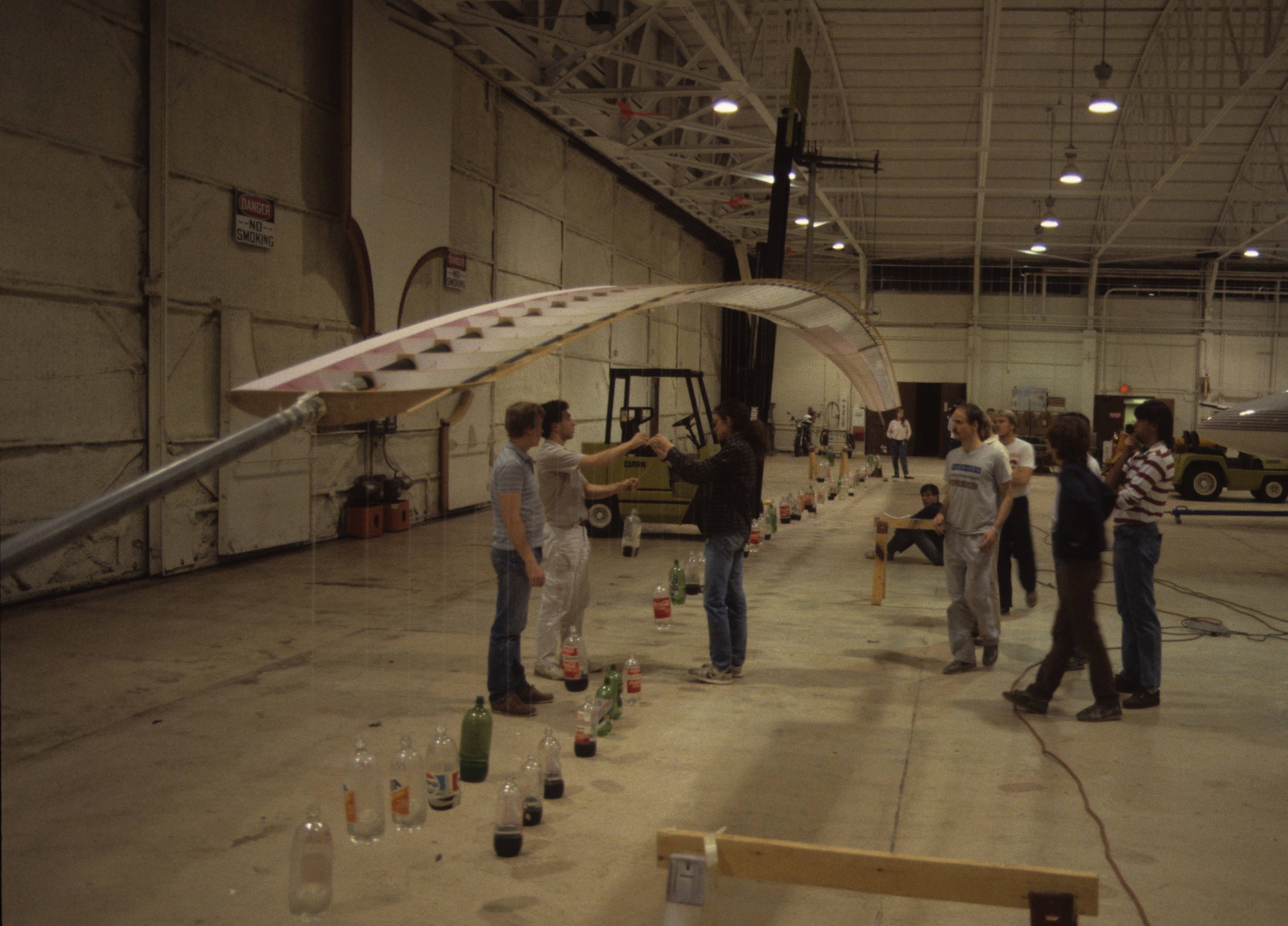 Load test on Dedalus wing. Yes, the guy with the Daedalus shirt is Mark Drela. Own work.

Besides the maximum strength tests, fatigue tests are of equal importance. Here a statistical load distribution (frequent low loads, infrequent high loads) is applied to the wing over thousands of hours. These tests stretch into the early operational phase of a design, such that the structure is cleared for more hours as the test progresses.

Not the answer you're looking for? Browse other questions tagged aircraft-design aircraft-performance wing flight-testing or ask your own question.

18
How strong is the A380 fuselage-wing joint?
11
Why do we complete wing bending tests?
4
Why are highly cambered airfoils rarely used in propellers or wings?
5
What physical tests are involved with verifying a wing spar is suitably constructed for a homebuilt aircraft, such as the piper cub kit from wicks?

19
How does chord length affect wing design?
8
Does an increase in air temperature actually improve aircraft performance?
14
Why are airports like Roswell and Fresno so popular for flight tests?
11
Why do we complete wing bending tests?
5
What physical tests are involved with verifying a wing spar is suitably constructed for a homebuilt aircraft, such as the piper cub kit from wicks?
3
Accounting for torsional forces during wing load tests
2
What is the drag optimized wing form for given lift and bending moment?
5
How to calculate bending moments and shear forces on a wing?