Why are ambient pressure and burner can pressure always the inputs on a hydromechanical fuel controlling system?

I worked on several of these older systems using a hydromechanical fuel control. I've noticed that the inputs at the fuel control are for the most part the same. Power lever angle, N2(N1 on a single spool), ambient pressure (usually Pamb or whatever the manufacturer calls it), and burner pressure (sometimes Pb4, again depends on manufacturer). My question specifically pertains to the pressures.

Why is it always ambient pressure and burner can pressure that are inputs? Why not compressor discharge pressure and turbine exhaust pressure or some combination of other pressures in the engine?

As I recall, the FCUs that I am familiar with have had at least the following inputs in addition to the control lever commands:

As both a mechanic and pilot I have studied many FCUs, and I do believe the inputs listed above are standard across all those with which I am familiar. This is certainly true of the types that I have studied most recently and the systems which I currently fly. Note that while these FCUs may be older designs—in some cases—they are commonly used on new production turbines.

The following are excerpts from some of my training manuals concerning a Bendix FCU: 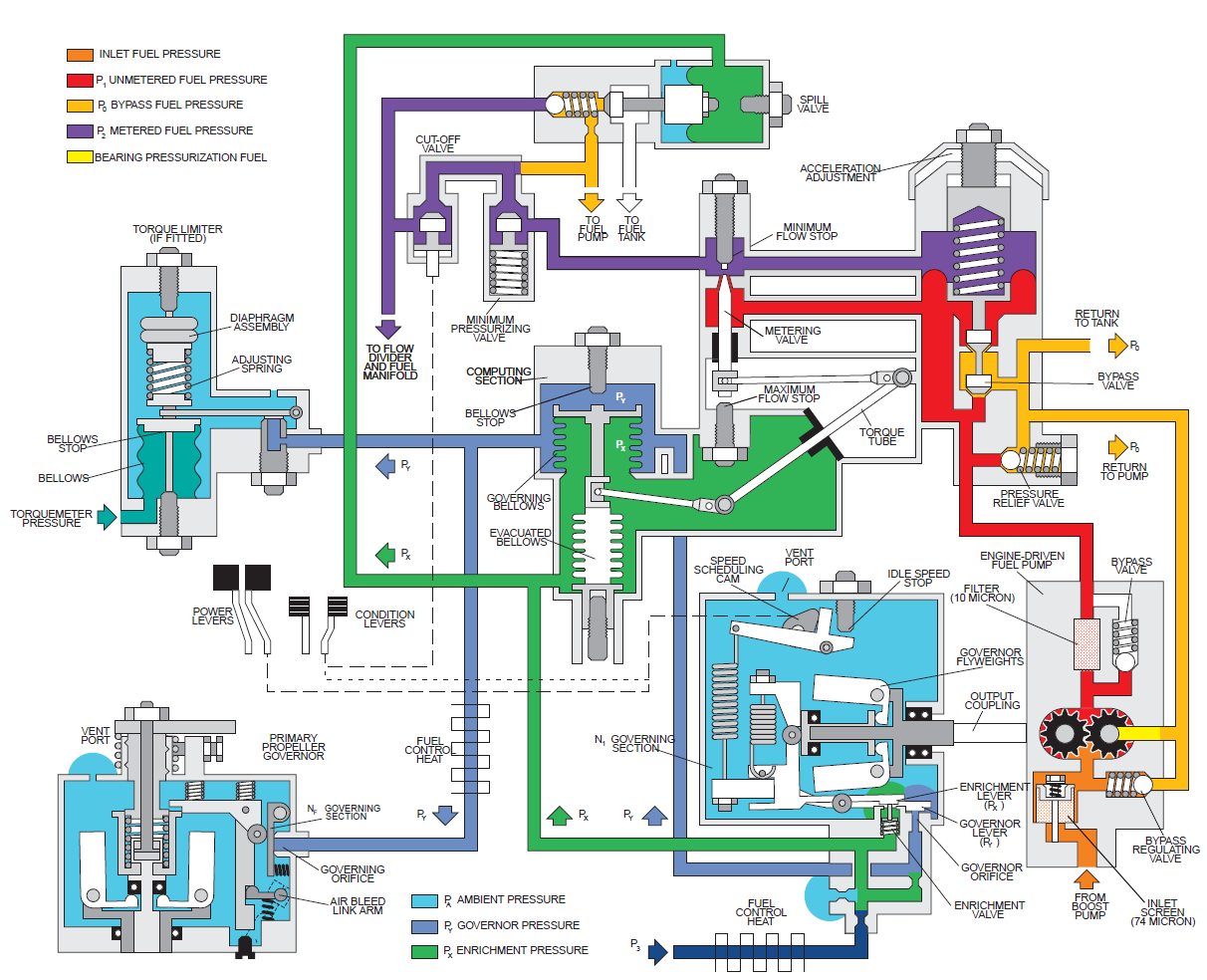 The pneumatic section of the FCU determines the flow rate of fuel to the engine for all operations. The power levers control engine power from idle through takeoff power by operation of the gas generator (N1) governor in the FCU. Increasing N1 rpm results in increased engine power.

For explanation purposes, consider the N1 governor bellows as a diaphragm. P3 air is introduced into the bellows in a manner that sets up a differential pressure on each side of the diaphragm. Therefore, any change in P3 pressure will move the diaphragm. When pressure is increased, the fuel-metering valve attached to the bellows will move in an opening direction to increase fuel flow and increase N1 rpm.

The FCU controls engine power by maintaining the requested N1 rpm through the N1 governor. If actual N1 rpm is lower than the desired setting, the N1 governor closes the P3 orifice, allowing pressure to increase. As the pressure increases, the diaphragm moves to open the metering valve, increasing fuel flow, which in turn increases N1 rpm to the speed requested by the governor. When N1 rpm reaches the desired speed, the governor adjusts the P3 orifice to reduce pneumatic pressure to match the fuel pressure required to maintain the desired N1 rpm.

Not the answer you're looking for? Browse other questions tagged jet-engine fuel fuel-systems or ask your own question.

1
Why would the fuel pressure decrease during a climb?
2
What are the differences between the proportional flow control FCU and pressure control FCU?
72
Why are fuel tanks in the wings filled first, and why are they used last?
1
How can I determine specific heats of gases for turbojet engine calculations?
0
Why is it that low fuel gauge is one indication of a compressor stall?
0
Who make the fuel system, cabin pressurization system, and firefighting system?
1
What are the fuel system pressure and temperature requirements of a Williams FJ44 engine?