What part of the F-18's wing profile allows for high AoA flight?

I'm trying to analyse the relationship between the angle of attack and lift coefficient of a wing profile I tested. However, I am finding that the data shows that the wing hasn't stalled by the time it reaches an angle of 25 degrees, whereas I am under the impression that a wing usually stalls around 15 degrees. I cannot recall where I have heard it, but I am under the impression that one of the reasons the F-18 is capable of high AoA flight is because of the "surfaces" around the cockpit:

Is that correct? Is high AoA associated with smaller wing width and high chord length?

Also, this is the data I've gathered. I tested the same wing at three different airspeeds. Sorry about the text being in Danish. 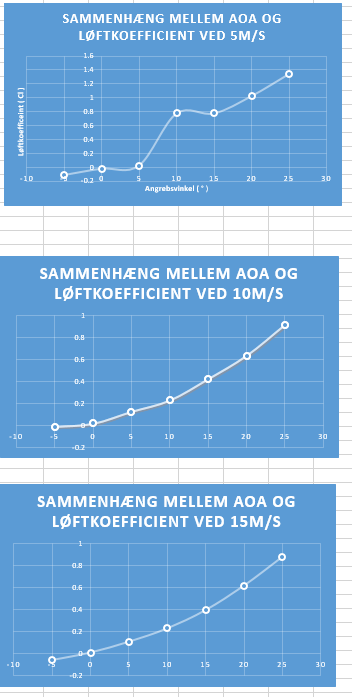 You're correct that the leading edge extension (LEX) plays an important part in increasing the maximum angle of attack of the Hornet/Super Hornet. The LEX basically forms a vortex above the main wing, which improves the high angle of attack capabilities by delaying separation. See this question about vortex lift and also another related question.

You can see the LEXs forming vortices over the wing in the following image. 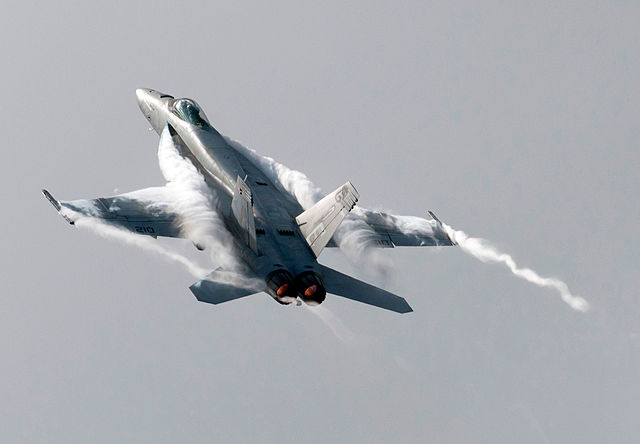 There is no simple way to answer this question because what matters is not the aspect ratio of the wing per se, but the way the lift is created. In case the wings have high sweepback, the method of lift generation is by vortex lift, which operates in higher angle of attack compared to the normal (moderately swept) wings.

In other cases where the wing sweepback is less, the lift generation will be by conventional means and consequently, the high angle of attack performance will suffer, though this can be remedied by the use of canards, thrust vectoring etc.

Not the answer you're looking for? Browse other questions tagged aerodynamics lift f-18 or ask your own question.

28
What is vortex lift?
16
What is this fighter jet that flew over KJST?
7
How does the use of Leading Edge Root Extension help in increasing stall angle?

3
For a flying wing airfoil, which AOA is to consider when selecting Cl?
1
What happens to the pressure differential of airflow under and over the wing as the critical angle of attack is reached?
18
Why does a clean configuration lead to the generation of greater wingtip vortices?
4
On a constant speed propeller, how is blade pitch related to airspeed and efficiency?
0
Pitching moment as a pure moment and its measurement with a homemade force balance
2
Why does the effective alpha/CL increase at wingtip of swept wing?
22
Do aircraft at cruise bob and/or skip?
2
What's the relationship between AOA and airspeed?