Why is the CFM56 produced with two different thrust reverse options?

According to Wikipedia, the CFM56 could support several reverse thrust options, and it appears that it has actually been built with 2:

Is this a simple case of catering to customer preferences, or is there a more in-depth reason for having multiple reverse thrust options?

Hispano-Suiza has delivered the world's first target-door reverser for a big turbofan, the A320's CFM56

The extending petal-shaped doors type is a Hispano-Suiza specialty. It's a French company and one of the three major suppliers of reverse systems.

In the 80's Hispano-Suiza had to be innovative to capture a bigger market share. Their door type was the first ever on a high bypass engine. They believed investing in R&D will help increase their sales (it did). The petal reversers also double as airbrakes. 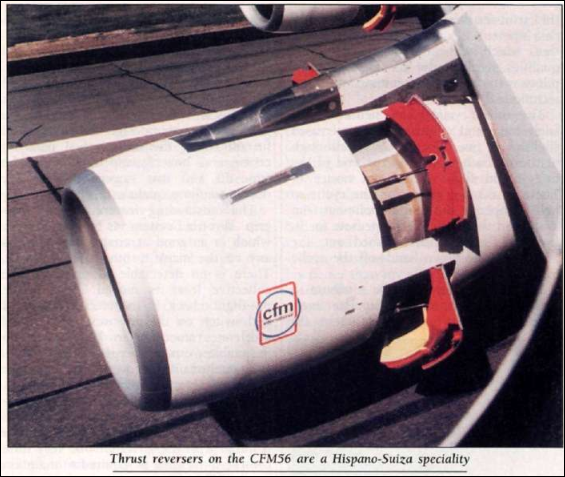 Since the CFM56 on the 737 is close to the ground, the doors would scrape the pavement. And—more importantly for other aircraft types—Hispano-Suiza's competitors are Rohr and Boeing. Boeing definitely would like to keep things in-house with their translating/cascading reversers.

Nowadays with the jet engines of the smallest regional jets to the wide-bodies being as wide as the fuselages, the cascading type is the better choice.

Most likely to allow for increase installation flexibility depending on the choice of engine cowlings to be used on a given aircraft design.

Not the answer you're looking for? Browse other questions tagged jet-engine thrust-reverser or ask your own question.

17
What is this turbine engine panel that opens on landing?
3
Can the thrust reversers still be activated if the landing gear won't extend?

24
Why can't most jets safely use reverse thrust while airborne?
13
Do the engines still spool up when reverse thrust is selected, but the reversers are not deployed?
7
For pilots, are the procedures different between airframes with different engine options?
7
Why is Reverse thrust more effective at higher airspeeds?
4
What would be the impact of replacing the engines on the 737 MAX, not just reworking MCAS?
3
Would reverse thrust increase with a decrease in aircraft forward speed when referring to propeller reverse thrust?
2
Are aircraft certified for inflight thrust reversal required to demonstrate controllability in an asymmetric-reverse-thrust scenario?