What happens to the control systems of a BAe 146 when the aircraft runs out of fuel?

On a BAe 146, is there any way to control the aircraft when it's out of fuel? Does the APU run on a separate tank? Can the engines be windmilled for power generation?

is there any way to control the aircraft when it's out of fuel?

Does the APU run on a separate tank?

Can the engines be windmilled for power generation?

Pitch and roll can be controlled mechanically.

The rudder needs hydraulic power - which can be provided from the emergency DC battery via a pump if the systems are configured appropriately for this by the pilots.

There is a magnetic compass and a minimal set of other instruments powered by the emergency DC bus.

The four engines, including the two with generators, each have a separate feed tank that is fed from the main tanks.

When fuel stops reaching the feed tanks, warnings are shown/sounded in the cockpit. I vaguely recollect the feed tanks may have something like 20 mins fuel (could be less).

The APU is fed from the same main fuel tanks as the main engines.

The electrical system has three modes

I believe that there is 30 minutes electrical power available from the emergency battery that powers the EMERG DC bus. There is an inverter that takes power from EMERG DC and provides power to the EMERG AC bus.

An overview schematic (allegedly for 146) does not show an emergency ram-air-turbine (RAT) generator. 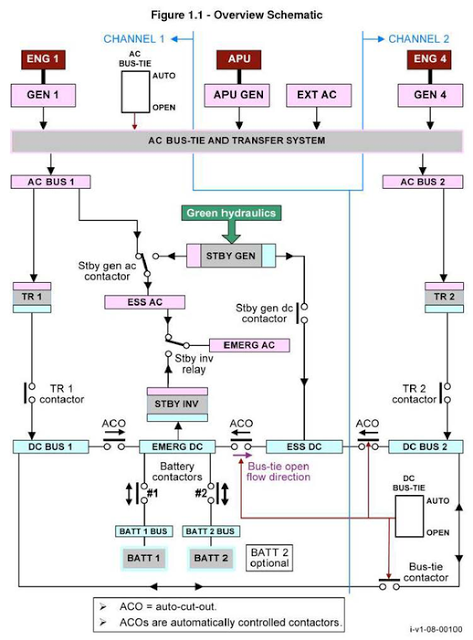 There are two Hydraulic systems, yellow and green. Each powered by a separate engine.

There is a DC pump that provides hydraulic power to the yellow system from EMERG DC power. There is a switch in the cockpit to control this.

A limited amount of hydraulic power can be generated by windmilling the engines but the pilots have to reduce the load on the engines by deselecting the standby generator.

One of the windmilling engines will be driving the emergency fuel pumps (obviously uselessly if you actually run out of fuel mid-air, rather than having problems with main pumps)

Not the answer you're looking for? Browse other questions tagged emergency flight-controls fuel-systems bae-146 or ask your own question.

33
If a typical passenger plane had total failure of all engines mid-flight, is it possible for passengers to survive?
19
Do jet aircraft have an emergency propeller?

2
What is the maximum range of a BAe 146-300? Can auxiliary fuel tanks be added?
10
Why does the BAe 146 have higher maintenance costs than other comparable jet aircraft?
3
What are the differences between the Avro RJ85 and the BAE 146-200?
6
Do the four engines of a BAe-146 make it efficient?
4
In normal condition, is the Airbus A320 APU fuel supplied by the main engine boost pump only?
1
Why are fuel pump switches separate?
0
Why doesn't the Convair 580 have check valves to prevent inadvertent fuel transfer?
8
How can the fuel decrease evenly from both wing tanks when an A320 is running on APU only?
17
Why aren't "fuel polishing" systems removing water & ice from fuel in aircraft, like in cruising yachts?
17
When drop tanks (those with external lines) are released, how are the two connections (air and fuel) released?