Do laser Christmas lights have the same dangers as laser pointers aimed at planes?

With new laser Christmas decorations like this one, a laser appears to shine in patterns on a house for a decorative effect. If this is aimed so that some of the beams miss the house and go over it into the sky, could they cause problems to planes? Would the effect be similar to a laser pointer, and could the person with the decoration be prosecuted as shining a laser at a plane?

A fine beam is needed do draw patterns. A regular led would require a moving focusing mirror, something expensive.

There is a non-standard warning: "Laser aperture, Max output < 1 mW" near the leds: 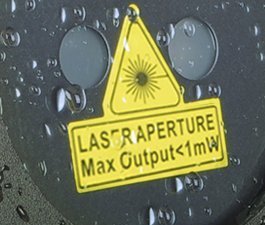 As the leds are in the visible spectrum, this is equivalent in power to a Class 2 laser.

A Class 2 laser is considered to be safe because the blink reflex (glare aversion response to bright lights) will limit the exposure to no more than 0.25 seconds. (Wikipedia). 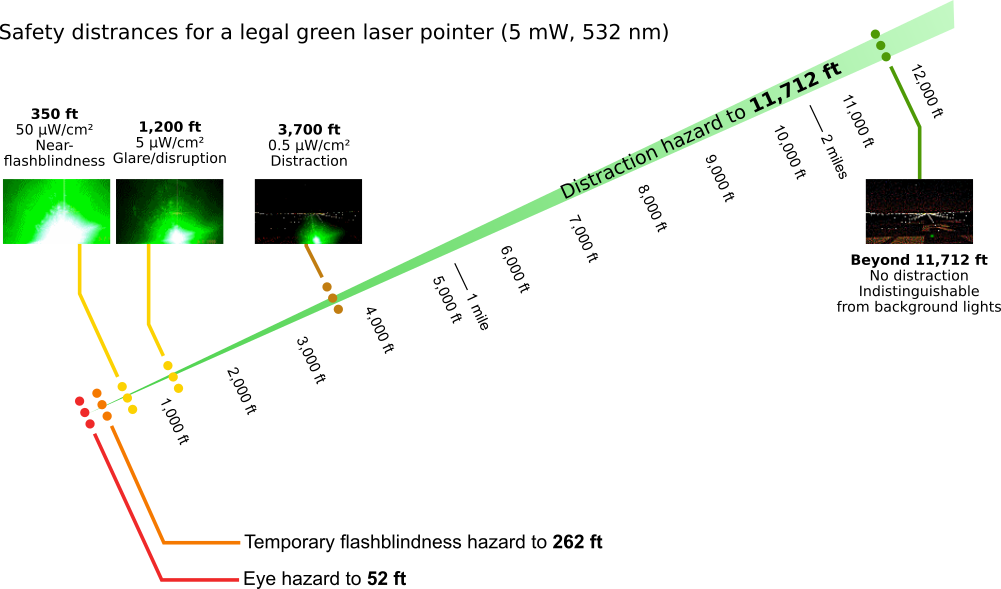 Adapted from original on Wikipedia

or from the original site:

The above distances are for a tightly focused beam, which is probably not the case of an inexpensive laser device. The effects of a more diverged beam are weaker.

The FAA will not tell you how to decorate your yard, it is not going around and regulating yard displays, however if your display is distracting pilots you will get an unwelcome knock on the door. If you are pointing them up on purpose though, it's an $11,000 fine and possible jail time.

These types of lights are unlikely to affect an aircraft.

The lasers in Christmas projectors are 1 milliwatt lasers. This power of laser is too weak to make a noticeable distraction beyond about 500 feet, so it would be unlikely to affect a plane. You can test this yourself by buying a 1mw laser pointer from Staples or other stationary store and having a friend shine it into your own car parked at the other end of a football field or wherever to see the affect. Beyond a certain distance the light attenuates into invisibility.

Generally speaking the minimum power laser needed to affect an aircraft is a 5mw laser which can reach several thousand feet and affect aircraft which are landing.

Another thing to realize that the odds of a house light accidentally pointing at an object far away is pretty remote. The typical divergence angle for a laser pointer is around 0.5 degrees, so assuming a hemisphere the random chance of an intersection would be 1 in 82,506.

Usually for a laser to present a distraction to an aircraft it has to be deliberately pointed and the person needs to be near the approach path of the runway.

A guy I know who flies helicopters was momentarily blinded by a stray beam.

He confirmed the cause as laser christmas lights when he drove by the residence he was flying over.

Not the answer you're looking for? Browse other questions tagged laser-illumination or ask your own question.

11
What is the effect of non-LASER light sources on pilots?

20
Is it worth reporting that I saw a green laser being pointed at the aircraft as a passenger?
21
How does aviation deal with satellite and Moon laser ranging, and other scientific lasers in the sky?