As discussed in this Q&A, NASA pilots had to fly 15 hours a month on T-38 to maintain flight proficiency. 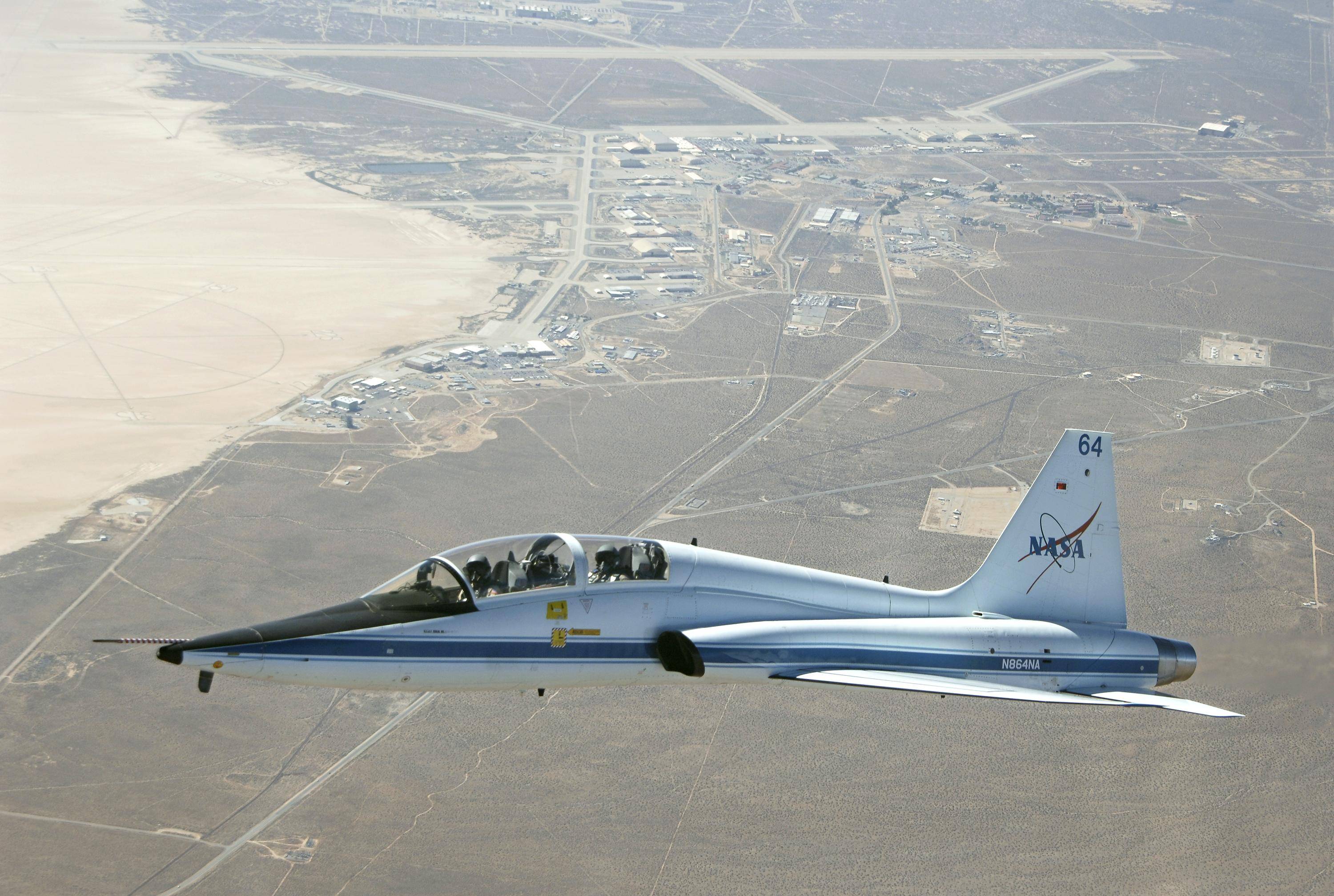 NASA Dryden's T-38 Talon trainer jet in flight over the main base complex at Edwards Air Force Base. Source

As a newbie, this seems rather weird - from all little I know about the Shuttle, its flying characteristics in no way resemble T-38.

What the T-38 airplane provides NASA is currency and proficiency in high performance aircraft operations in a jet which has many of the same characteristics as the shuttle in this respect ie high wing loading, high approach and landing speeds, similar glide descent ratios. The White Rocket is a temperamental and challenging little jet to land and will not tolerate sloppiness from her flight crew here. She requires the pilot to stay well ahead of it while making an approach, plan out and execute small corrections very precisely while maintaining airspeed, glide path and angle of attack. Maintaining good proficiency in these aspects of high performance aircraft flight and keeping sharp on that high speed mindset comes in handy in an astronaut's line of work.

And T-38s make excellent chase aircraft, capable of keeping up with the shuttle during the final phases of its descent and approach, and can provide an extra set of Mk 01 eyeballs to verify external functioning of systems, eg landing gear, speedbrakes, hydraulic leaks, etc.

Actually, outside of the shuttle sims, landing approach practice was done in a modified Gulfstream II which included a replica of the shuttle flight deck for the left seat guy. It apparently was remarkably similar to the shuttle in a deadstick landing.

I flew the T-38 in pilot training. (They ended Vietnam and tossed most of us out before we could finish since they no longer needed pilots. Which also means I am now officially old.)

Besides training, the T-38 is still used today as one of the primary chase planes when testing new aircraft, since at least during much of the testing it can keep up with the newest faster aircraft yet has 2 seats for a pilot and observer or fly's well with just a single pilot. At one time, the F-5 version of the T-38 was used as the enemy fighter at both the USAF and Navy TOP GUN schools (it's was used in the movie). So in proper hands, it can go head to head with F-14, F15, F16 and F-18 fighters. No bad for a "mere trainer". Its fast, maneuverable yet cheap. Nothing comes close for the NASA mission.

The general idea is to keep the pilot thinking like a pilot. Even ordinary pilots have to have 3 landings in the previous 90 days before they can fly with passengers. It's like warming up before playing tennis; you have to be doing it to stay in the groove.

Just like the first few balls you hit after not playing tennis for a while go over the fence, you can do some pretty crazy things in a plane if you are not tuned up. I once saw a guy jump in a high performance glider for his first flight of the season after doing a very minimal checkout and he misjudged the approach and ended up in the trees.

The choice of a T-38 is obviously because that is the standard AF trainer, but you are right, it is weird. The mentality of AF jocks is jets, jets, jets. But you are right that the Space Shuttle is not anything like a jet, so the T-38 is not the best choice of practice platform.

A better practice platform would be to use a glider and then weight it so it comes down like a rock. If NASA modified the glider the right way it could be made so that it would fly its approach like the shuttle. That would be a far more apropos way to keep the shuttle commanders current.

Shuttle astronaut Mike Millane's autobiography, Riding Rockets, suggests that the mindset of flying a fast jet is a big factor, rather than the precise flight characteristics:

NASA's simulators were great at preparing astronauts to fly the space shuttle, but they had one critical shortcoming. They lacked a fear factor. No matter how badly you screwed up, simulators couldn't kill you. But high-performance jet aircraft could. Flying the T-38s kept the pilots razor sharp in dealing with potentially deadly time-critical situations, something spaceflight had in abundance.

And as it happened, unfortunately, the T-38 did kill four astronauts in the 1960s.

Another reason for using the T-38 was simply logistics. Astronauts were required to travel quite a lot; their base was in Houston, but depending on assignments they had to visit contractors and other NASA facilities to participate in development, testing and training. By letting them fly themselves they could get to wherever they needed and logging flight time.

Flying from Houston to either coast takes a few hours one way, so this was a lot of time saved which would otherwise have been spent on additional training.

Not the answer you're looking for? Browse other questions tagged flight-training nasa space-shuttle t-38 or ask your own question.

12
Does NASA use T-38's to train all crew members of a space flight as pilots?