Why increase the number of cylinders in an engine instead of increasing their volume?

I've been reading about WW2 planes lately. Some of them have 12 or even more pistons in their engines.

But if your goal is to increase power, why would you add more pistons instead of simply increasing the size of the cylinders?

Such "collectivizing" of the cylinders would be more efficient for a number of reasons. The friction of piston rings scraping the cylinder would be less, meaning less oil and more power. The crankshaft and related things could be shorter. I believe it would be lighter for another reason too: the surface area goes up less than the volume (squared versus cubed). Probably the engine as a whole would be simpler.

Anyway, why not just make the cylinders bigger?

The question is about the optimization of number of cylinders versus displacement volume per cylinder for engines used for aviation. This narrows the scope to “internal combustion reciprocating piston engines” (plus the Wankel engine as a very special case).

Obviously, rockets, pulse jets, turbine-powered, and electric engines have no cylinders, and steam engines were never (successfully) used in aircraft.

Number of cylinders and the cylinder displacement are two out of countless parameters that go into the design of any engine. Both may be used to increase the power output.

The power output of an engine may be increased either through the number of cylinder or through increasing the cylinder displacement (or both).

Each change of parameters causes the gain or loss of certain wanted characteristics. These are listed further below under (N), (n), (D), and (d).

Adding cylinders is easier than increasing the size of the cylinder. The cylinder geometry does not change. Identical engine parts can be used multiple times in the same engine design (cylinder banks, cylinder heads, or complete engine blocks).

Starting from one engine configuration, the same power output may be achieved by

Reasons to increase the number of cylinders (N) 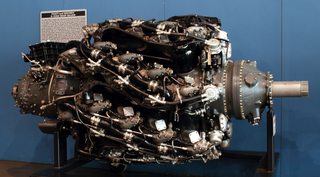 Reasons to decrease the number of cylinders (n) 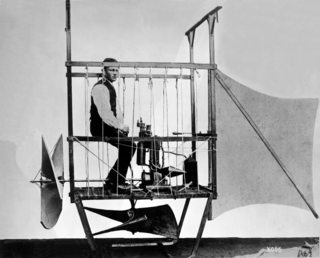 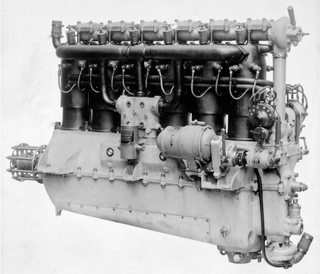 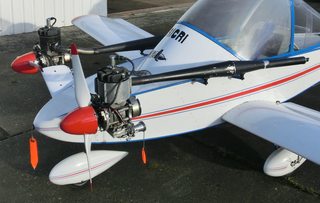 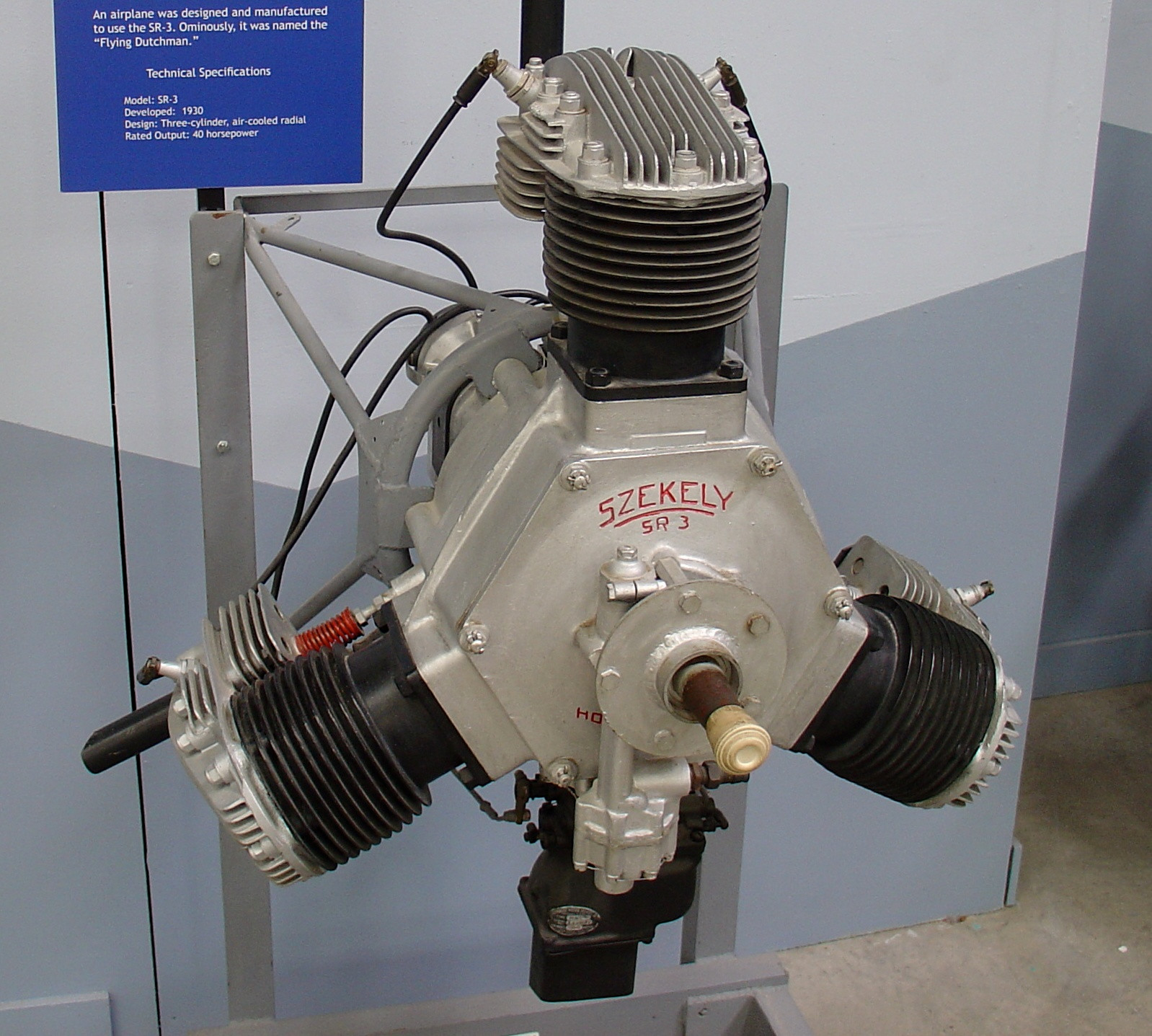 Your reasoning is correct if engine mass is not important. Ships use huge engines, because increasing the number of cylinders beyond 8 will have diminishing returns in terms of smoothing out the torque ripples, and bigger cylinders help to increase efficiency. But aircraft need to keep the mass of the engine down. 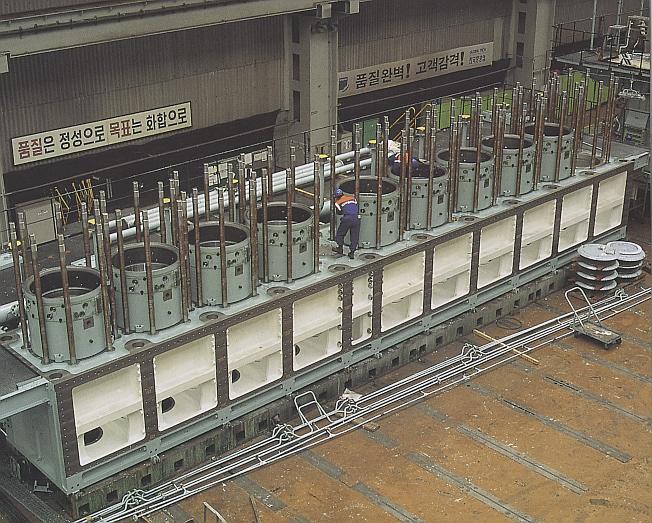 Wartsila-Sulzer RTA96-C turbocharged two-stroke diesel engine during assembly (picture source). Its size makes this engine supremely efficient: Its 14-cylinder version produces 108,920 hp at 102 rpm and has a thermal efficiency of more than 50%. Specific fuel consumption is only 0.260 lbs/hp/hour. But it weighs 2600 tons!

Engine power is the product of torque and speed. To maximize engine power, the speed must be kept as high as possible. Increasing cylinder size will limit the speed at which the engine can be run due to the speed of the combustion process inside the combustion space. If the cylinder diameter grows too big, the flame front originating from the spark plug will not have traveled far enough to have burnt most of the fuel by the time the piston moves down again. Only adding more cylinders will increase power while keeping the speed of the engine constant.

Here is a comparison of WW I aircraft engines from the excellent enginehistory.org site. Note how the figures for bore and speed correlate inversely (the Austro-Daimler 120 was a pre-war design and saw later speed increases): 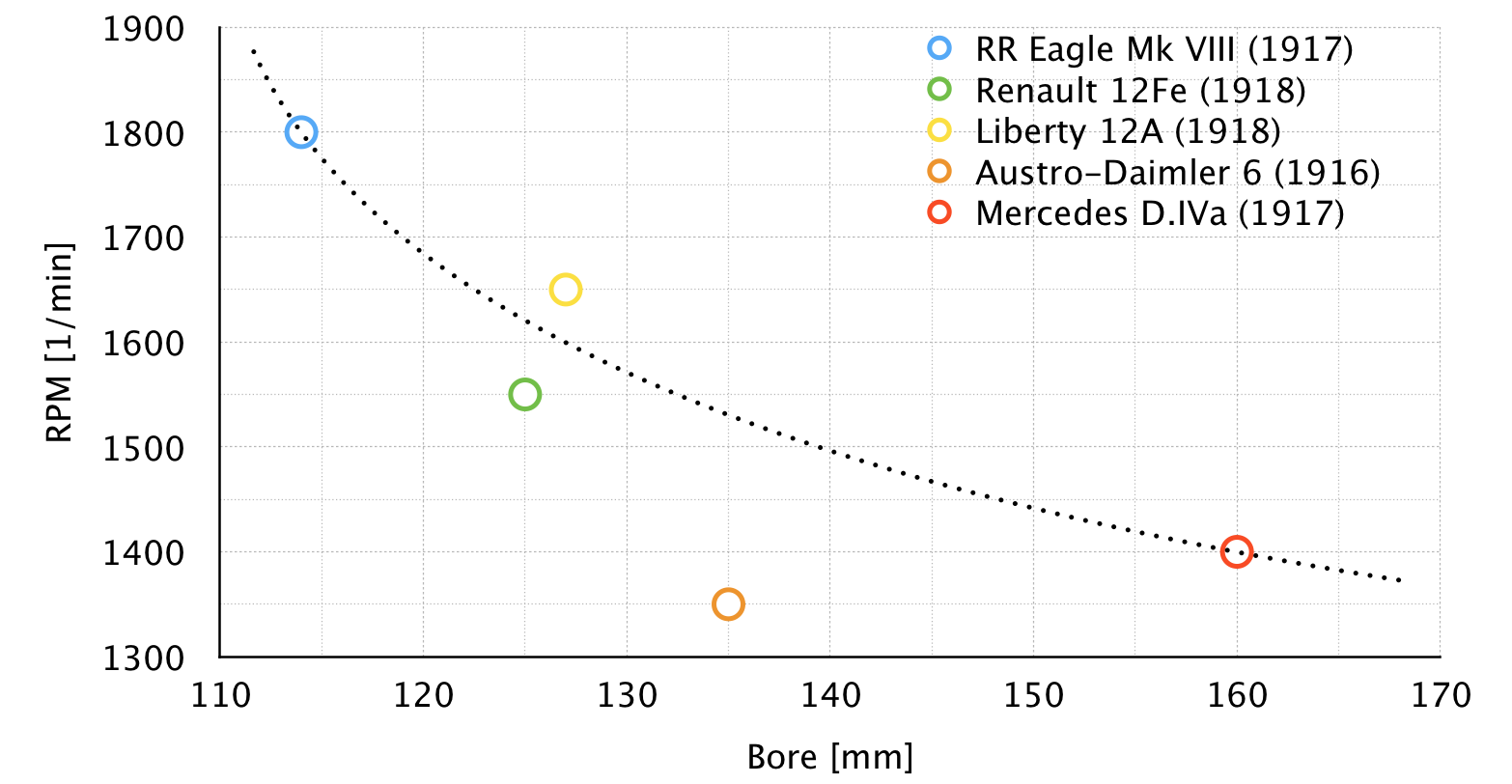 Graphical comparison, the Austro-Daimler is shown with the specs of a later version.

Quote from the linked PDF (enginehistory.org):

The large bore diameter, however, pushed the upper limit of an aero-engine cylinder. Adequate cooling and fuel efficiency require a complete as possible combustion of the fuel-air mixture and this complete combustion requires that the flame fronts moving across the combustion chamber from their respective points of ignition be given time to meet. The speed of a four-stroke aero-engine with a large cylinder bore is thus actually limited by the rate of combustion of the fuel-air mixture which for a given cylinder and mixture is a constant and thus efforts to increase the output horsepower by increasing the speed of an engine with a large bore cylinder may result in incomplete combustion, over-heating and detonation.

Other limits to engine speed like loads on the connecting rods or adequate cylinder filling and flushing can be dealt with by using materials of higher strength and more valves per cylinder, respectively, but when the type of fuel is given, the hard limit for engine speed is the cylinder's bore. So the only way to increase power without hurting the power/weight ratio is to add more cylinders.

Others have already mentioned the scaling of volume vs scaling of surface. However the most important part about the surface is valve area.

When you scale a cylinder 2 times you get 8× as much volume but only 4× bigger valves. This means that same volume of the cylinder is now served by 2 times smaller valve area. This area determines how fast you can fill and empty the cylinder. This means that you have to turn the rpm down. As more rpm means more power, that means you get diminishing returns: twice as big cylinder will deliver less than twice as much power.

Adding another cylinder, on the other hand, is almost perfectly linear: twice the cylinders mean twice more power.

You said it yourself with the surface-area-to-volume-ratio. You have to get the heat out of the cylinders, and if they're too big you can't do that effectively. It's also difficult to get even, complete, rapid combustion as the volume increases.

Most was already said, but I'd add following:

With more cylinders, the strokes are so timed that, when one cylinder is compressing, some other gives out power, and so on. This ensures that the power output (or mean torque, as will be shown in a T-theta diagram) will remain constant over complete rotation of crank. Kinetic energy stored in flywheel is proportional to it's mass (actually mass moment of inertia). If engine requires less energy from flywheel for compression strokes, K.E. required to be stored in flywheel is less. And flywheel could be made lighter .

Planes need to conserve weight. In other words: it wants an engine with a high power/weight ratio. The power produced by a cylinder is proportional to the surface area of the piston (if the pressure stays the same). So, if you divide all the dimensions of a engine cylinder by 2 the power produced is 4x smaller, but the weight of the cylinder is 8x smaller. Hence, the power/weight ratio is twice as high. That's why planes prefer engines with lots of small cylinders over an engine with a few large cylinders. In engineering this is called 'dimensional analysis', see https://en.wikipedia.org/wiki/Dimensional_analysis

Early aviation was not based on very much on all these scientific or engineering concepts, but based on what they found worked. Many early aviation engine manufacturers primarily came from automotive industry, and they took what they knew worked, and doubled it to meet power requirements (flat 6 to v12). Why they tended to not simplify and reduce the number of cylinders probably had a lot to do with reliability (more cylinders, more redundancies). The British, and by alliance Americans, had the first jet engine concepts of the war but focused on more practical technology; which would have you wanted to test fly?

In addition to what has already been said here, there is a piston speed limit, high revving engines have shorter crank throws. The flame front and thus the piston can only travel so fast, huge engines like boats have huge throws, low rpm engines, but have similar maximum piston speeds to car engines.

Why not make the crank throw the same but have really large diameter pistons? well that can be done, but only up to a point, too wide and the crank shaft gets too weak and the engine becomes really wide.

49
Why are two-stroke engines nearly unheard of in aviation?
24
How does gas turbine efficiency compare with supercharged piston engines?
20
Are turboprops more efficient than piston engines (thrust per fuel consumption)?
5
What is the theoretical maximum RPM of a typical aircraft piston engine?

24
Why do piston engines in aircraft burn fuel at a higher rate than a comparable car engine?
5
What is the theoretical maximum RPM of a typical aircraft piston engine?
56
Why do most radial engines use an odd number of cylinders?
5
How would a new "clean sheet" General Aviation piston engine with all the latest technology differ from existing Continental/Lycoming types?
9
Causes of High CHTs
49
Why are two-stroke engines nearly unheard of in aviation?
5
Why weren’t large, high-power radial engines built to take advantage of the Meredith effect?
17
Can the plane Celera 500L be eight times more fuel efficient than a jet of similar size and capacity?
0
Can anyone tell me more info about this radial engine?