Do fuel tank locations on the wing cause a potential for weight imbalance?

I have a question about fuel tanks in an older plane like a P-36C Hawk and a P-26B-35. The fuel tanks in the P-26 are placed in the wings and in the P-36C Hawk its under the pilot and behind him. For the P-26 or any plane with its fuel tanks on the wings would it cause more weight on one side if the fuel is used more then the other?

If the port and starboard tanks drain at different rates in a gravity fed system (due to a blocked valve or a clog in a fuel line), then eventually a differential in remaining fuel will drive a lateral imbalance in the plane's weight. Another (and better) way of saying this is that the center of gravity will no longer be aligned with the aircraft centerline.

I can't comment on how this situation might emerge in the P-26 specifically, as I could not find a detailed enough description of its fuel system.

It is worth noting that the same is true with fore/aft center of gravity drift in aircraft where the tanks are located entirely in the fuselage (or under it). This often has a more dangerous effect if not properly managed (and as a result the Cg drifts too far aft).

It is also worth noting that lateral asymmetry can also be created by non-simultaneous release of stores (like the 200 lb of bombs that the P-26 carried). However, in the case of the Peashooter, the bombs were carried very close to the centerline, so the asymmetry would be minimal (as compared to that on a P-51 for instance).

Planes with multiple tanks have fuel selector valves. So the flight-crew can switch between tanks to keep the plane balanced.

For an old plane like the P-26 you mentioned, there is a fuel selector lever. Here it is circled below: 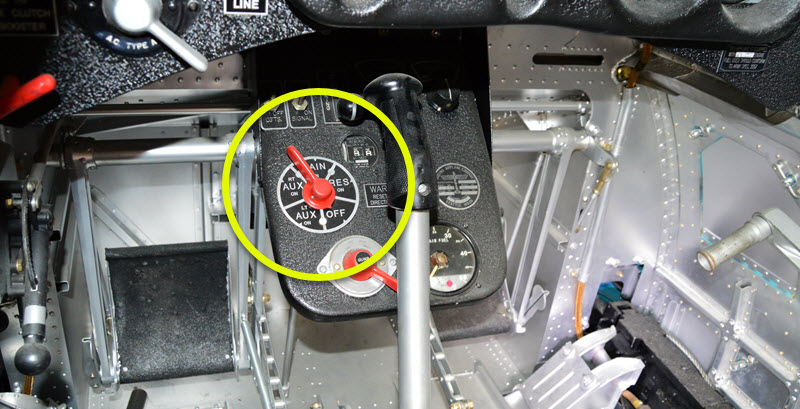 Not the answer you're looking for? Browse other questions tagged aircraft-design fuel-tanks or ask your own question.

7
What is the working principle of anti-explosion fuel tanks?
10
What to do with excess fuel before flight?
12
Can we eliminate the center tank of large passenger planes?
13
Was there a design flaw in the fuel tanks of the MiG-15/17/19/21?
23
In WW2, were self-sealing fuel tanks really cost-beneficial?
0
How do they fill fuel in big aircraft?
2
How can adverse maneuverability due to a fuel tank behind the rear pressure bulkhead be mitigated in Airbus ZeroE hydrogen plane?
3
Did WW2 airplanes ever jettison their empty external fuel tanks to act as weapons?