How would an airfoil react if it was flown backwards?

Out of curiosity what would happen?

Would pressure on both top and bottom flip? or stay the same or act as a normal wing with less lift?

I'd assume it would still take longer to travel over the top than the bottom. Then conservation of energy takes effect and produces lift due to pressure, just wondering what negative effects happen?

What would happen? Flow separation on the suction side, but it would still produce lift like a regular airfoil. The L/D ratio would be lousy, however.

Only at a small angle of attack range will the wing show attached flow on both sides: When the stagnation point is right at the tip of the trailing edge. This behaviour is similar to that of a flat plate and produces a rather limited range of useable lift coefficients and substantially more drag than when used properly. But still you get more suction on one and more pressure on the other side. The blunt rear edge will cause flow separation at all angles of attack and substantially increase pressure (or form) drag.

An airfoil with a blunt trailing edge has an advantage over a flat plate because it will perform acceptably over a slightly larger angle of attack range, but still this will be no comparison to the behaviour with the blunt side facing forward. Indeed, the front of an airfoil needs to be blunt to allow its use over a larger angle of attack range, while its rear end needs to be pointed to reduce the area over which the flow separates.

Now I feel I should drop a line or two about the cause of lift. Essentially, a wing creates lift by accelerating the air that flows around it downwards. The inclination of the airfoil will already be enough to cause this acceleration, regardless which side faces forward. The plot below shows how several airfoils perform over the first 180° angle of attack. 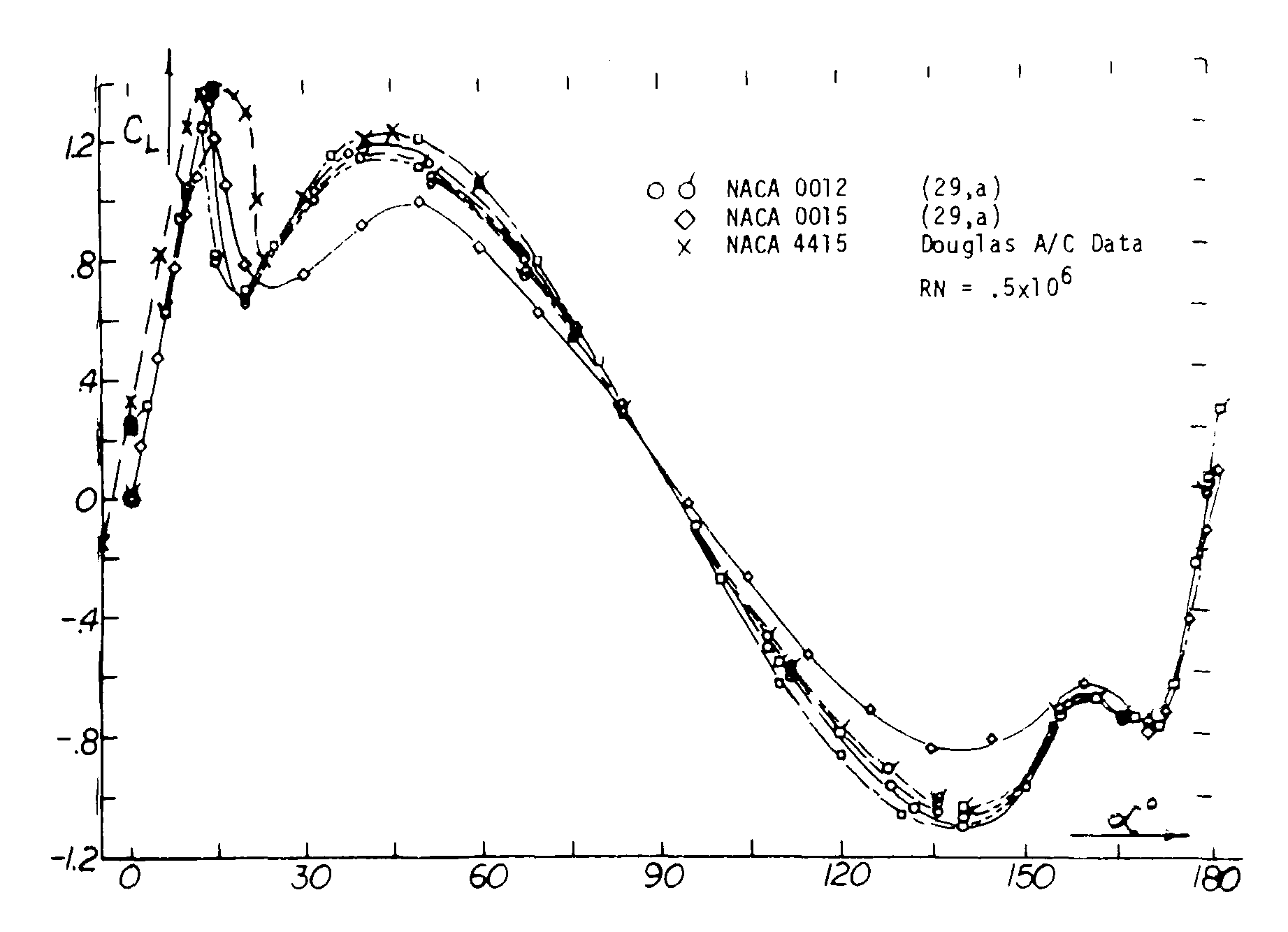 Lift coefficient over the first 180° angle of attack (picture source)

If you take the pictured wing, the same wing blunt side forward, and something in between you start to see what was explored in the 1940s by North American aviation as "laminar flow", attempting to reduce drag by delaying flow separation as much as possible.

Moving the thickest part of the wing back to around 30% and greatest camber to around 40% reduces drag by not only reducing turbulent flow on the top rear of the wing but also adds thrust by tilting the lift vector forward. The resulting wing has an improved lift to drag ratio but suffers the same issue as the reverse wing: a very sharp, unpredictable stall due to lack of warning buffet and a lower stall AOA from the sharp leading edge.

Rounding the leading edge greatly improves stalling characteristics, leading to the use of slats to have the best of both worlds for cruising or slow flight.

The Kline-Fogelman design even tried removing the rear top portion of the wing, and was studied by NASA (inconclusively), but the time honored way of minimizing drag, as seen in gliders, is as high an aspect ratio as possible, in other words, removing the entire back of the wing. This is also seen in the more modern 787 airliner wing when compared with the older 707.

45
Why does supersonic flight detach airflow from a wing?
26
Is there an aerofoil that gives reasonably good lift for both air flow directions: forward and backward?
12
Is it possible to take off backwards using reverse thrust?
17
What is the performance of a flat plate wing?
9
Is induced drag essentially nothing more than a specific type of form drag?
11
Does the downwash created by induced drag increase or decrease lift?
2
Would there be any advantages to a wing with a concave upper surface?

31
Principle of aerodynamic lift: are misconceptions also taught in flight schools?
3
Is flow turning different from the Magnus Effect? If so, how?
14
What amount of lift would be created in the fallacious "lift from equal transit time" theory?
0
Which moments are acting on a flying airplane?
2
Aerodynamics moment of a wing
0
Pressure Distribution Pattern around Wing
2
Visualising downwash over a finite wing
1
Will this specially shaped can produce any lift?
4
How does Condensation Affect Lift?
3
What causes lift?