Why do the N1 and N2 fans have different shafts?

This question here contains a cutaway of a jet engine (which I'm putting right....here) 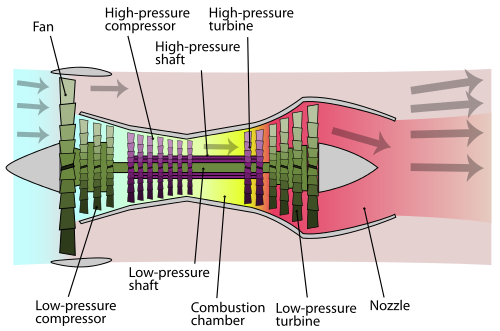 After reading the answer, and looking over the chart, I noticed that the shafts for the N1 and N2 fans are completely separate (something I'd never noticed before.)

What purpose does that serve? Do they always move freely from each other, or can they be locked?

A turbofan, where the fan is wider than most of the turbine/compressor disks, poses an issue—

In a single-spool, running a wide fan up ahead to the same speed of a small fast turbine will result in a very, very fast inefficient supersonic fan, i.e., the turbine will waste valuable fuel trying to overcome shockwaves at supersonic blade-tips (instead of using this fuel to produce thrust), or just simply bog down.

Unless you're after a turbojet with no fan, then single-spool is fine.

However, if you can separate the wide from the narrow, each on its own shaft, you can then run each at different speeds, big fan at slow RPM, smaller compressors/turbines at their efficient high RPM.

Rolls-Royce takes it a step further, and prefers a 3-spool system, 3 shafts—3 speeds. N1, N2, and N3—each shaft is given a number, in a single-spool there'll just be a single RPM readout.

To run the fan even more efficiently, enter the geared turbofan, where the fan is slowed even further using a reduction gearbox, allowing for an even bigger fan that runs slower—and quieter. 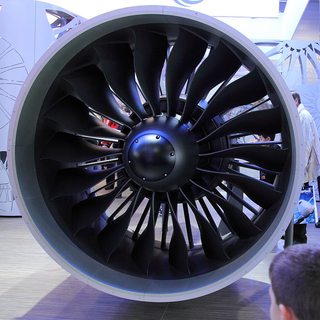 (Source) Pratt & Whitney PW1000G (geared turbofan) that powers the A320neo, see how big the fan is compared to the 'core'.

For the spool-lag, or input/output delay, we find from Why do turbine engines take so long to spool up? that spool-lag is significant when comparing different engines: piston, turboprop, and jet engine.

For a jet engine, the more the shafts, the more complex the system is. Gains from efficiency will be lost—more or less—to weight gains (same era and materials). Comparing the 3-spool RB211 to the same era 2-spool CF6 for a thrust of ~270 kN, we find the 3-spool is overall heavier, despite each stage running more efficiently.

For counter-rotating shafts, which I asked about in How does the Pratt & Whitney F119 achieve its features?, and as far as I know, only the F-22 and possibly the F-35 utilize it, and I don't think the specifics will be revealed anytime soon.

From Carlo's answer there, having both shafts turning opposite to each other, the torques become opposite and to a degree would nullify each other, requiring less structural elements, saving weight and improving the thrust-to-weight ratio.

The fan, LPC/T, and HPC/T spools all operate at different speeds for optimal efficiency. A hard link between them affects the speeds at which the other spools can operate, reducing efficiency.

Separate spools reduced the rotational inertia of each, reducing 'spool-up' lag, and allowing them quicker response times to throttle inputs.

The spools can be contra rotating, reducing the effective moment about the engine casing and mount, making the engine lighter.

32
How are turbine engines started?
32
Why do turbine engines take so long to spool up?
10
Why do many large turbofans have a gap (of turbine blades) between the LP turbine and HP turbine?
6
Why do turbofan engines have low pressure compressors?
7
How does the Pratt & Whitney F119 achieve its features?
5
What are the limitations of using a single shaft between the compressor and turbine in a jet engine?

1
Why do turbofans have different nozzles?
9
Could a turbofan have two adjacent fans?
5
Are there any ducted propeller or fans without a shaft in the centre?
0
Does a trent 900 engine have the ability to spin extra or more fans?
18
Why does each fan blade have a different mass and frequency?
7
Why don't turbofan engines have shrouds affixed to the fan blades?
3
Why do some Turbofan engines have multi-stage fans?
3
Are centrifugal compressors/turbines less efficient internally, and if so, why?