How is bleed air used to start a jet engine?

I know that most jet engines on commercial jets are started either with bleed air from an APU or bleed air from the other engine... But I'm not exactly sure how bleed air actually starts the engine?

Is the bleed air just being blown into the compression chamber? Or is it being used in some other way?

As a starting point, this question here has an answer that describes the entire process of starting a jet engine on a high level. It includes a short section on bleed air:

Through the opening of bleed air valves, bleed air is sent to an air turbine starter. These devices typically use the high pressure bleed air to spin and engage a centrifugal clutch connected to the engines accessory drive. This in turn causes the N2 shaft within the engine to spin.

But I'm hoping for a more detailed explanation on what the bleed air is doing, how (and where) the clutch is applied (is there a transmission as well?). Problems that may arise, and how they are dealt with. Etc etc... I just would like more detail if it's possible.

jet-engine airliner engine-starting
Share
Improve this question
edited May 11 '17 at 17:55 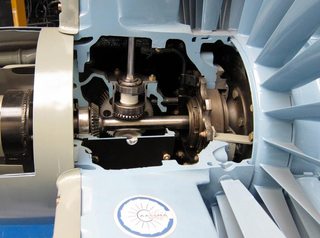 (Source) Image shows how the shaft is connected to the gearbox.

The engine shaft is connected to an accessory gearbox. The spinning shaft spins the gearbox, which drives the generator, the engine-driven fuel pump, and other accessories. 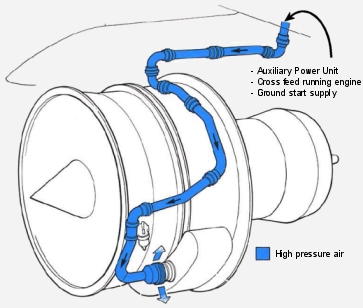 Once the shaft is spinning fast enough to bring in compressed air that would guarantee a successful and sustainable burn, the fuel is introduced, and the engine starts and speeds up further. The turbine then disconnects. Just like how a Bendix drive1 in most car engines disengages the starter motor once the engine is started.

In a twin-spool (two-shaft) jet engine, the gearbox is usually connected to the high-pressure shaft—the same shaft for the compressor/turbine stages closest to the burners.

What can go wrong?

Apart from starter- or gearbox-related malfunctions, not enough air pressure to spin the shaft—which would be an issue with the APU, start-cart, or piping.

If the jet engine is sitting in fast-enough tailwind entering from the rear (the jet pipe), the engine will be windmilling in the wrong direction, it could result in too much force for the gearbox to overcome. In this scenario, the pilot would select the engine reversers—by opening the reverse doors / engaging the buckets, less wind will be allowed to spin the shaft the wrong direction.

An exceptionally strong tailwind (in excess of approximately 20 knots) may prevent positive N1 rotation at a max motoring RPM of 15% to 20% N2. In this condition the Captain should do one of the following: 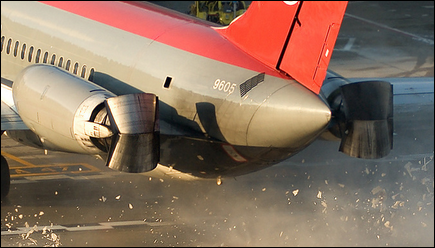 1 Same Bendix we know, that's how he made his initial fortune.

Not the answer you're looking for? Browse other questions tagged jet-engine airliner engine-starting or ask your own question.

21
How are temperature differences handled in a jet engine?
11
Is starting a jet engine without ground support possible?
6
Are there turbofan/turbojet analogues to a centrifugal-compressing jet engine?
9
How does the FADEC prevent compressor stall during rapidly increasing thrust demand?
2
Is there a practical carbon-free jet fuel?
8
Are any jet engines used in combat aircraft water cooled?
4
How would exhaust heat recovery into the combustion chamber affect the efficiency of a jet engine?
7
What causes the horn-like noise during the start-up of some jet engines?