Why do people put $1 & OVC on aircraft bills of sale?

When purchasing an aircraft a bill of sale is created to show transfer of ownership from the seller to the buyer. Bills of sale include what the seller was paid in exchange for the plane. But apparently bills of sale for aircraft are commonly done differently.

The first item to fill in is the price of the aircraft, where it says "For and in consideration of $___." To preserve the confidentiality of the transaction, the FAA will accept the phrase “$1 & OVC” (Other Valuable Considerations) in this spot, and most Bills of Sale are filled out in this fashion. source

At first I thought maybe it was some way to get out of sales or use tax, but the FAA would certainly not approve tax evasion. The state will calculate taxes either from the lien amount or the usual market value. This would definitely not pass muster for the sale of a car or a house. The only time the state treasurer ever had me put $1 was when I was giving a car to a family member.

Obviously the price is being withheld for some reason, but I can't really figure out what that reason is. The price is easily found with a records search. The only person this hides the sale price from is the FAA. And since the FAA approves that wording they obviously don't care. Why do people not want the FAA to know how much they paid for their plane?

This practice is really more of an accounting/finance question than an aviation one, but it's common enough that it's probably worth addressing here.

When reviewing an aircraft's registration record you will frequently see the price on the FAA Aircraft Bill of Sale form given as "\$1.00 & OVC" (One dollar and Other Valuable Consideration) as shown on the example below (click to enlarge). 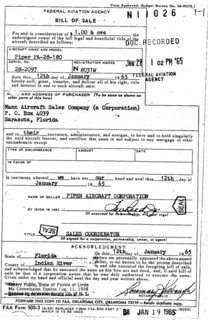 The "Other Valuable Consideration" can be anything of value: Personal favors, other property (a car, a different airplane), blackmail information on someone you don't like, or (most commonly) money in excess of \$1.

In a strict cash sale recording the amount on the bill of sale in this manner protects the sale price from prying eyes: Anyone with \$10 to spend can request an aircraft records dump from the FAA which will contain every bill of sale filed, but if the price is listed as some small dollar amount plus "Other Valuable Consideration" it's impossible to determine the exact price paid using only the bill of sale.
Note that in cases other than a strict cash sale other documents filed with the FAA (for example recording a lien against the aircraft to secure a loan financing the purchase) may disclose the purchase price depending on how those documents are filed: Some include the amount of the debt the aircraft is securing, others simply state "The debt identified by loan number 12345." which would still protect the confidentiality of the sale price.

As a means to avoid taxation recording the sale price as "\$1 & OVC" almost never works: The tax authority is going to ask you the value of the "Other Valuable Consideration" and base the tax due on that amount.
If you tell the tax authority the aircraft was really only worth $1, and record it as such, they're going to want to know why: Generally even an unairworthy aircraft is worth more than that for the value of its parts.

Conversely if you get a ridiculously good deal on an airplane it can be to your advantage to fill out the bill of sale accurately & present that along with other documents pertinent to the sale to your tax authority: You may be able to get the sales/use tax based on the ridiculously good deal rather than an appraised market value.

Not the answer you're looking for? Browse other questions tagged usa cost aircraft-purchase .

4
How do you determine how much "life" an aircraft has left?
5
Why doesn't the U.S. Federal Government auction their retired but memorable aircraft?
8
What are the strategies for getting familiar with a GA aircraft before considering a purchase?
29
Why don't Russian aircraft sell as much as their European/American counterparts?
19
What keeps certified GA aircraft from being affordable?
3
After purchasing an aircraft, how do I put the transponder in my name?
28
Why bother having different engine options on one aircraft?
1
How can a plane be cheaply owned by multiple people?
17
What are the pros and cons of buying a kit aircraft vs. a factory-built one?