Does an aircraft like the Airbus A-320 have external sensors to detect damage to the aircraft?

I read a news item recently . According to the article, the wingtip of an Airbus A-320 collided with the left wing of an A-330 while on the taxiway at Mumbai airport. The A-320 (VT-IFP) experience a damaged sharklet. The collision was observed by a passenger and then shared with the aircraft staff (flight attendants I guess) who informed the captain. The plane was led to a hangar, passengers de-boarded and sent on other plane/s by the airline.

What I want to know is: aren't there any sensors which can detect an impact and give/share that information to the pilot? I do understand that the airplane takes a lot of jerk and movement during takeoff and landing as well as during turbulence.

But when damage as such as the one described above happens, why isn't there some automated system that could inform the pilot instead of having to rely on a passenger's keen eyes?

This is related to an answer I gave here about why aircraft typically do not have mirrors and external cameras.

Short answer: yes aircraft do have sensors to detect damage, but not the kind of damage you're talking about.

Long answer: to design or decide what sensors to put on the aircraft and where, we have to get started with failure modes. There are at least a million way for components to fail, however, some failure are more likely to occur than others.

Do we have sensors which detect failures / abnormal situations? We do! We have sensors for control surfaces, hydraulics, gears, tire pressure, cabin pressure, engine temperature, oil pressure etc.

Here is an image of one of the cockpit screens on a Boeing: 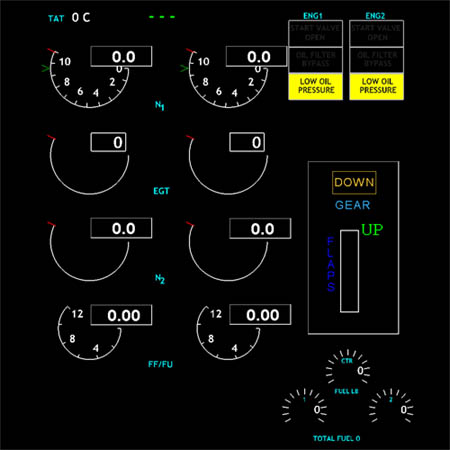 OK, so why not more sensors?

Because sensors can fail. Now that would be a nightmare to troubleshoot: the sensor says the right outer landing light is not illuminated. Is that true? Let me exit the aircraft and take a look......

It turns out that:

Perhaps this is the kind of system you have in mind:

28
F-111 emergency landing with no wheel; what is done to reduce risks when loosing a wheel?
9
Why don't airliners have any mirrors or cameras?
3
Is pilot alerted of any physical or structural failures?

0
What does "ENG 2 REV PRESSURIZED" ECAM message mean in the Airbus A32F?
6
How does the Aerobridge dock with an aircraft?
10
Does the Airbus A350 have an Automatic Emergency Descent System?
6
How does SLATS/FLAPS retraction damage the RTLU mechanical stop if we retract them after the ADIRS are set off?
8
Why do some aircraft have to have the landing gear pinned prior to towing?
5
Are the details of flight control laws the same for every fly-by-wire Airbus aircraft or are they only the same within the specific family?
9
Does the Antonov An-225 have an Auxiliary Power Unit (APU)?
28
Why does the B-29 have eight oil needles?