Rotation direction for adjacent propellers, how do different arrangements compare?

The Airbus A400M uses counter-rotating pairs where the blades meet moving downward (if there is a better description, tell me please).

I played the video frame-by-frame to make sure it wasn't a tricky stroboscopic effect; use <> if you're using the HTML5 player.

How do the different arrangements compare aerodynamically? I think for the three arrangements below, the propeller blade interference will have different characteristics. 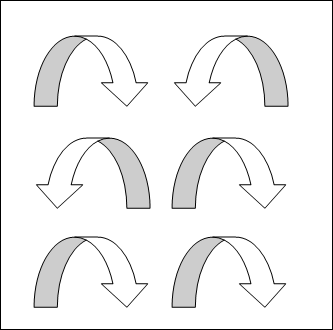 Initially during A400M development (when the project was still called FLA), all propellers were supposed to spin in the same direction. The reason for this was the objective to use a single engine in order to minimise logistics costs.

Windtunnel tests soon revealed that the prop wash would create asymmetric flow on the wing, causing uncontrollable rolling moments in low speed flight. Only two options allowed to remedy this:

Counter-rotation resulted in heavier propellers and gearboxes, so it was decided to go with the second option. The exact direction of rotation for each engine was then determined in further wind tunnel tests, with low-speed handling and maximum lift coefficient the determining objectives.

Not the answer you're looking for? Browse other questions tagged aerodynamics propeller multi-engine or ask your own question.

18
Why does an aircraft as big as the Airbus A400M use turboprops?
12
Is the Progress D-27 really a propfan?