Why don't both black boxes hold the same data?

As I understand, there are two black boxes on-board an aircraft. One black box, the Cockpit Voice Recorder holds the cockpit conversations and the other, the Flight Data Recorder holds essential flight parameters.

Black Box(s) is a misnomer, you have correctly mentioned their actual names.

Why are the two black boxes holding separate data?

They have different purposes.

Flight data recorder: This is an electronic device employed to record any instructions sent to any electronic systems on an aircraft. It is a device used to record specific aircraft performance parameters.

Cockpit voice recorder: This device is used to record the audio environment in the flight deck of an aircraft for the purpose of investigation of accidents and incidents.

Why don't black boxes hold copies of both the FDR and the CVR data for extra redundancy?

Since they record different data, they are different. They are built different.

Are there any technical reasons for why this isn't possible or hasn't been attempted yet?

It has certainly been attempted. 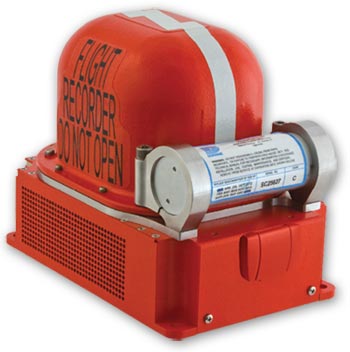 Is there any benefit of having the CVR and FDR in separate boxes?

Probably the reason is that different teams investigate the data obtained from them as they have to recreate the scenario before the accident.

CVR: Due to the highly sensitive nature of the verbal communications inside the cockpit, Congress has required that the Safety Board not release any part of a CVR tape recording. Because of this sensitivity, a high degree of security is provided for the CVR tape and its transcript. The content and timing of release of the written transcript are strictly regulated.

FDR: Newly manufactured aircraft must monitor at least twenty eight important parameters such as time, altitude, airspeed, heading, and aircraft attitude. In addition, some FDRs can record the status of more than 300 other in-flight characteristics that can aid in the investigation. The items monitored can be anything from flap position to auto-pilot mode or even smoke alarms.

Similar to Lnafziger, here is what I can think of:

The number of cases where your suggestion would actually benefit investigation is not very many. In crashes that damage the recorders too much, making the recorders larger and more complex would probably not help. There have been many cases where the recorders didn't work properly or at all, so giving more functions to each box makes this more likely to occur more often.

Here is a list of unrecovered flight recorders. Considering the time it spans, there are not many, and in some cases, neither recorder was recovered.

I'll see if I can find any references for the cases where they were recovered but contained no useful data.

There are a couple of reasons that I can think of off of the top of my head:

As Farhan pointed out, there are already some units capable of recording all data at once, but since the regulations only require one unit there is no added redundancy. For aircraft that are required to have both a CVR amd a FDR it could be a great option!

In my opinion, I think that whatever is present in one black box also will often tell the other half of the story as well.

For instance, if the airspeed indicators are unreliable, the CVR will pick it up by the pilot's talking, even if the FDR may be lost or destroyed, which will point investigators in the right direction how to continue the investigation.

In other words, I'd imagine there's a bit of indirect redundancy by two devices.

However, many aircraft have a quick access recorder which although not armoured will give much the same stuff as a FDR. If I'm not wrong, Flight Data Recorders are mostly non-mechanical devices and are tested annually, so they are kept reliable.

The reasons for TWO boxes are most likely that they came up with the idea for a cockpit voice recorder first, and later decided to add another one for data.

Today, with digital chips replacing the big bulky tape machines, they can be made smaller and lighter and they indeed do make recording of both cockpit voice and data contained in the same box, such as this one...

And they are also considering have two per plane, one in the tail section as is done now, and the other near the front cockpit, so if one is damaged, info could still be contained possibly from the second unit which would also contain both voice and data.

They are constantly considering all options, from floating boxes, to transmitting live data to satellites as well during flight.

Not the answer you're looking for? Browse other questions tagged safety aircraft-design flight-instruments or ask your own question.

23
Why are FDRs and CVRs still two separate physical devices?
3
What is the form of information stored in black box?
3
If we add a video recorder in the cockpit to complete FDR/CVR, will we add a blackbox?

35
Why don't pilots always use autoland?
11
Where are the microphones for the black box located in the cockpit?
51
Why are cockpit instruments white on black dials?
2
Why don't all pilots receive at least basic instrument training?
7
Why do aircraft stall warning systems use angle-of-attack vanes rather than detecting airflow separation directly?
8
Why aren't angle-of-attack data sanity-checked before being fed to other aircraft systems?
6
Why does an A300/310 in LAND or GO-AROUND mode have to be at least 400 feet AGL for manual control column movement to disengage the autopilot?