What were the effects of the oil crises on the Concorde ticket prices?

One of the things that is considered to have greatly hampered Concorde's success were the dramatic oil price increases due to the 1973 oil crisis (the 1979 one surely didn't help either, but it was too late already).

Wikipedia tells me that the 1973 oil crisis resulted in crude oil prices being multiplied by four. How much could this have affected Concorde's projected ticket prices ?

This is a very complex question, because I'm really interested in how much this affected the commercial case of Concorde, meaning a standard occupancy rate would need to be considered (ideally what was considered initially for Concorde if anyone has any idea...). But due to the difficulties of Concorde, the occupancy rate was usually very low (surely much lower than projected without the oil crisis), to the point that actual ticket prices surely ended up reflecting that. But that is a triggered consequence I would like to be able to distinguish from the original factor (after that we can of course add the calculation when the occupancy rate gets reduced as a result).

The Concorde started service only in 1976, so there never were actual pre-crisis prices. This makes your first question impossible to answer. Of course the airlines which ordered the Concorde had their plans how much to charge, but kept that a commercial secret.

When service started, the plane lost money. What happened next is an interesting lesson in economics. From A Pricing Lesson from the Concorde:

The Concorde team decided to do some market research. They asked businessmen how much they thought a Concorde ticket cost. The answer, “Most of them didn’t know. It was their secretaries or travel companies doing the bookings. When they were asked to guess, because they were senior, very important people, they all guessed that the fare was higher. ” – explained Captain Jock Lowe, Concorde resource & Planning Manager.

This insight led to a new pricing strategy. Captain Lowe described “So very simply, we said, we’ll charge them what they think they are paying. And so we put the fares up”. There was a discrepancy between what the company was charging and the value customers saw in the product.

Concorde ticket prices were doubled to over $7,000, one way, in today’s prices. As a result, Concorde was repositioned to provide a super-elite class for bankers, the rich, and the famous. Concorde became the place to be seen.

Generally, ticket prices were 1st class + 20%. So what affected ticket prices most was the all too human tendency to show off; the mechanism that makes luxury brands possible. Fuel became less significant.

Now let's look at the fuel cost. This table only starts in 1975 (but covers the full operational history of Concorde), and when I apply your factor of four, the pre-1973 price of jet fuel would had been 8 cent per Gallon. This means the nominal price has gone up by a factor of 50 when compared to the peak in 2008. 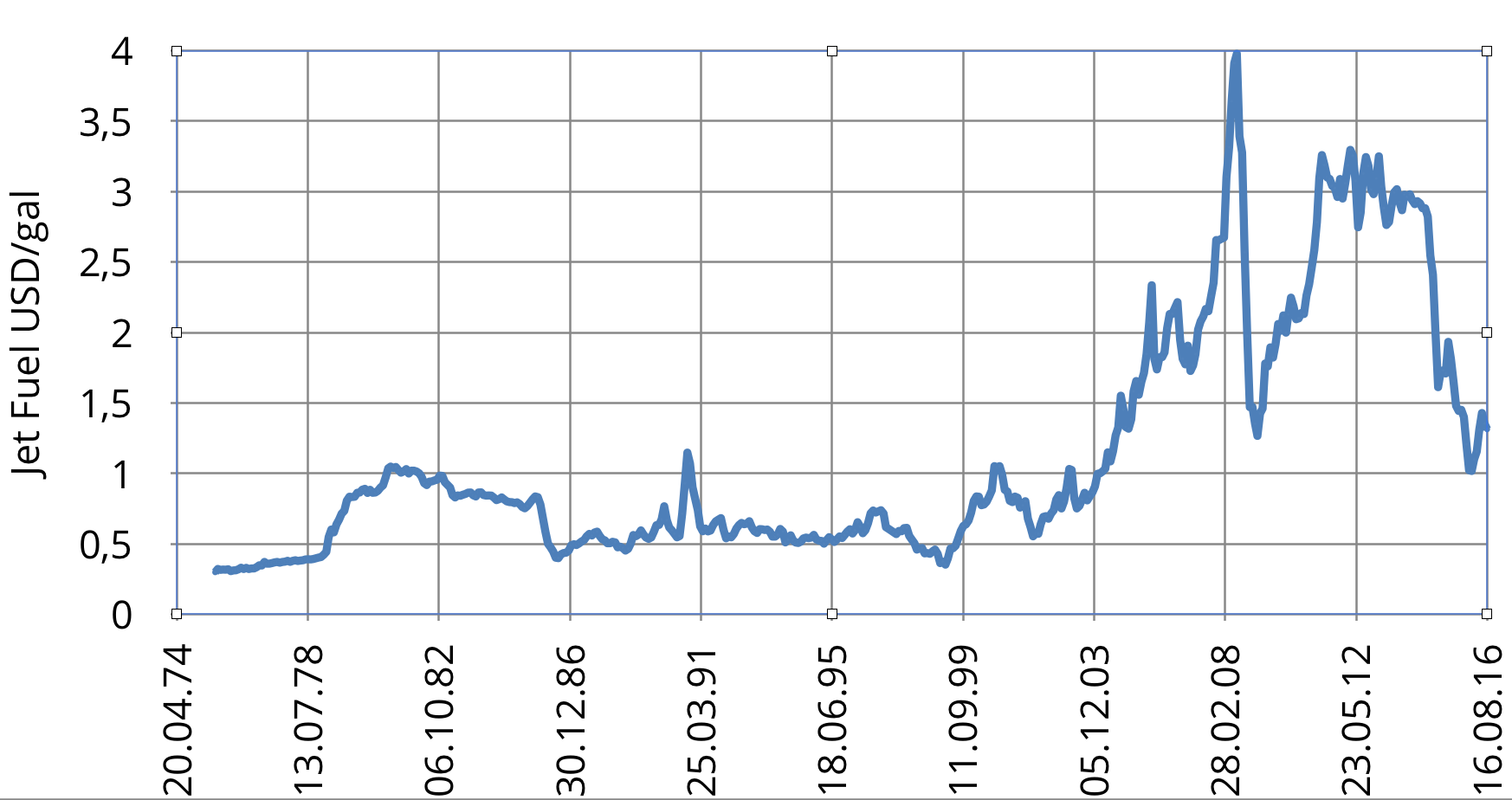 The Concorde typically needed 214 Gallons of fuel per passenger on the Paris - New York route (see my comment for evidence; using @mins much better source gives 236 Gallons), so that means fuel cost per ticket would look like the plot above, multiplied by 214 or 236. At the start of operations in 1976 that would had been about 70 USD per ticket, would had jumped to 200 USD per ticket at the start of 1981, would had dipped below 100 USD briefly in mid-1986 and again in 1998. The peak would had been above 800 USD in mid-2008 had the Concorde still been in operation at that time and would today be nearly 300 USD.

Not the answer you're looking for? Browse other questions tagged fuel concorde economics or ask your own question.

15
Where I can get historical jet fuels prices?
5
Why did the FAA ban all supersonic flights over the United States, rather than only supersonic flight in densely-populated areas?
0
Does the 737 have a higher aspect ratio than most later 7X7's?
0
Could a modified J58 jet engine be used commercially?

11
What are the barriers to feasibility of stratospheric cruising for commercial air travel? (i.e. Concorde?)
16
At what altitude did Concorde go supersonic?
15
How were astronomical observations performed from Concorde?
12
What was the commercial speed of Concorde?
10
What is the history of Concorde motto "May Concorde bring people closer" and medal?
44
Why was Concorde never sold as a private business jet?
4
What was the speed limitations for droop nose on the Concorde?
15
Why were the windows on the Concorde about the size of a hand?
4
What made Concorde so heavy?
6
Did the Concorde have darkened windows?