Why is there a pressure drop in the combustion section of a jet engine?

This image, referenced in this question, shows in green the pressure value in a jet engine: 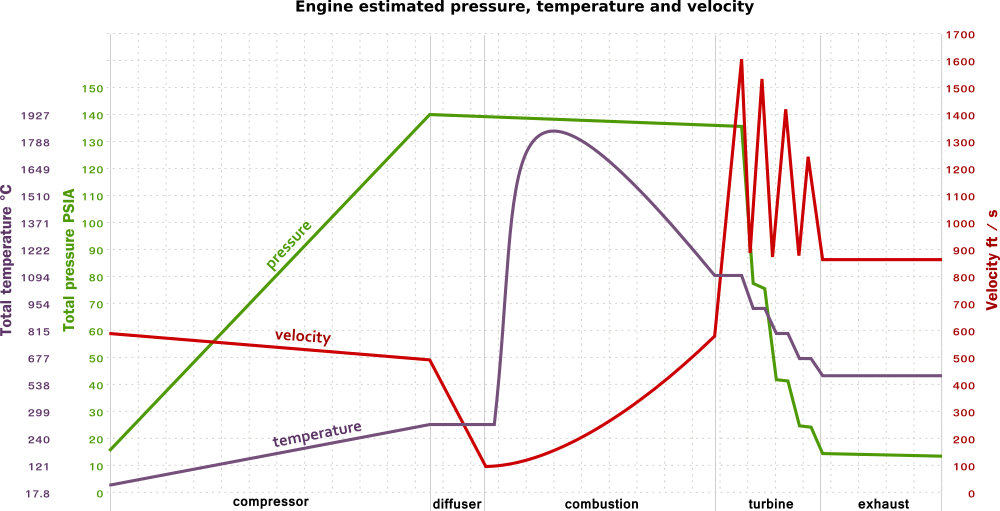 The combustion section between compressor and turbine is where fuel is injected, mixed with air, and burnt. Why is there a pressure drop while combustion occurs and temperature suddenly increases by 1,500°C (to be compared with pressure increase after ignition in a reciprocating engine).

The air moves¹ in direction of decreasing pressure except where forced by the compressor. So the pressure must be decreasing to maintain desired flow. If the pressure was increasing, the flow would stop and reverse and the engine would stop operating.

In fact, that's exactly what happens if fuel is added too fast: the energy quickly raises, but the still slow-spinning turbine provides too much resistance, so pressure will increase above what the compressor can provide and the compressor will stall, the engine will emit loud bang and some flames from both ends and likely flame out as it runs out of oxygen for a moment.

As already explained, in the normal flow the released energy increases the velocity of the flow instead of pressure.

¹ More precisely accelerates. If the pressure was constant, it would keep moving. But it must not raise. It decreases slightly due to friction.

The question you linked to contains the answer to your question:

the small pressure drop in the combustor is caused by friction

In a reciprocating engine, the gases are trapped until the exhaust valve opens, unlike a jet engine where it's an open exhaust. In a cylinder the gases are not accelerated. So, v rise in a jet, p rise in an engine cylinder. Temperature rise in both.

36
Why do new jet engines cost billions to design?
37
Why do gases in the combustion chamber only flow one direction to the gas turbine in a jet engine?

2
How does induction ice form in and affect jet engines?
10
Where does turbine vane and blade cooling air come from?
17
Why is max endurance different for jet and props?
7
Is this an accurate depiction of the internal shape of a turbofan engine?
9
How does the FADEC prevent compressor stall during rapidly increasing thrust demand?
1
How can I determine specific heats of gases for turbojet engine calculations?
2
How can I calculate turbofan efficiency as a function of turbine inlet temperature?
0
Why is it that low fuel gauge is one indication of a compressor stall?