The B52, from the same era, used a swept wing, and had a higher maximum speed.

In the answer to What are the advantages and disadvantages of a delta wing compared to a swept wing?, Peter Kämpf explains that a swept wing is ideal for subsonic airliners.

No one else has built a subsonic delta-wing aircraft since, military or civilian. Why did the designers of the Vulcan make this unusual choice for a subsonic aircraft? 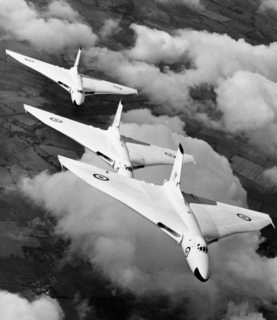 By Ministry of Defence [OGL 3], via Wikimedia Commons

It was obvious to the design team that conventional aircraft could not satisfy the required specification; knowing little about high-speed flight and unable to glean much from the Royal Aircraft Establishment or the US, the team at Avro investigated German Second World War swept wing research.

The team estimated that an otherwise conventional aircraft, with a swept wing of 45°, would have doubled the weight requirement. Realizing that swept wings increase longitudinal stability, the team deleted the tail (empennage) and the supporting fuselage, it thus became a swept-back flying wing with only a rudimentary forward fuselage and a fin (vertical stabilizer) at each wingtip.

The estimated weight was now only 50% over the requirement; a delta shape resulted from reducing the wingspan and maintaining the wing area by filling in the space between the wingtips, which enabled the specification to be met.

In short, the team didn't know much about high-speed flight (blame Wikipedia). And to reduce the weight, they eliminated the tail-plane, shortened the span, and filled in the space between the wingtips. Achieving their weight target.

For the same area, a wide wing is lighter to attach, as it requires smaller spread spars.

So, for weight reduction, a delta wing wins against a conventional swept-back wing aircraft. In all, great engineering solution to a big problem, with one downside—

—higher fuel burn at those speeds, limiting the range.

The B-52's were known for loitering in the air for extended durations. Their efficient design requires fewer rendezvous' with the tanker. Unlike the famous Vulcan train.

Some numbers (in kg and km): 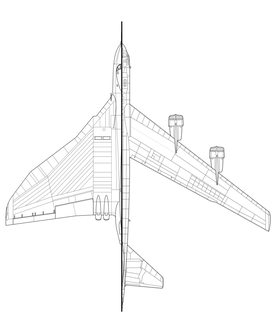 I would not say that no other bomber ever had delta wings. Convair B-58 Hustler and Mirage IV both have delta wings. They are both supersonic though.

The B-52 did not have to worry too much about MTOW and empty weight since SAC already had bases with long runways capable of really heavy aircraft. That's thanks to B-52's predecessor B-36. The B-36 was the heaviest land based aircraft of its time and ground pressure was a very real concern when basing that beast. Britain did not have such bases. The Vulcans predecessor, the Avro Lincoln, could take of from grass fields.

The Vulcan was capable of supersonic flight. The B52 never was designed for that. The Vulcan shows heavy influence of 1940s high speed designs (The Me 163 Komet), but as can clearly be seen by the MTOW chart, suffers from delta blues as far as lifting capacity and range. Deltas simply cannot lift as much as conventional wings.

They did, however, provide an easier path, particularly in those times, to supersonic flight. By generating lift with vortex flow, a thin, flat wing can be employed, side stepping Mach airflow compression issues (rocket fins routinely go supersonic). Deltas enjoy a wide flight speed envelope and are found in applications from hang gliders to many supersonic aircraft. They are very strong and easy to make.

However, we do not see them in subsonic transport or bombers because they are not as efficient in generating lift for their drag. Blended wing/body, same thing. For long range efficiency, the wing itself does its job, everything else belongs in a streamlined tube.

Vulcan was built to a specification which gave it a top speed capable of outrunning the fighters of that time. The specs from wiki make it too slow to do that. The Mk 10 used the same engines adopted much later for the Concord. Rumour had it that the last ships off the line were capable of 900mph. In the fifties six Vulcans did an exersize. They flew over the pole and attacked six major US cities. They were not intercepted. After the initial report in the newspapers a D notice made sure that the incident was hushed up. It did appear as a front page feature in the AVRO news, A monthly company newsletter. Much later the Valkerie was developed in the US. This compensated the nose dive tendency by adding a canard wing on the nose.Later again the B1 was a similar shape. The latest idea is now the blended wing design which like the Vulcan is capable of carrying 50% more than an aircraft with a fuselage. Just in case you missed the point. The initial research was done in the AVRO factory in Chadderton. Tests in a huge tank found the wings suffered fatigue and fell off. The solution was found when it was suggested that a line of perforations along the breakage line would solve the problem. The toilet paper never ripped along the perforations. Solution Honeycomb sections. Saved lots of weight and was far stronger.

Not the answer you're looking for? Browse other questions tagged aircraft-design military wing-sweep delta-wing avro-vulcan or ask your own question.

11
What are the advantages and disadvantages of a delta wing compared to a swept wing?

11
What are the advantages and disadvantages of a delta wing compared to a swept wing?
9
Why did the Beechcraft Starship use a delta wing?
3
What is a "slender delta" wing?
0
Why is the delta wing naturally stable in pitch?
11
Why was the Vulcan bomber used for the Falklands raid?
6
Why do UCAV/UAV designs mostly use lambda wings instead of pure delta wings?
13
What are these pipes on an Avro Vulcan?
1
Why are there so few carrier capable delta wing aircraft?